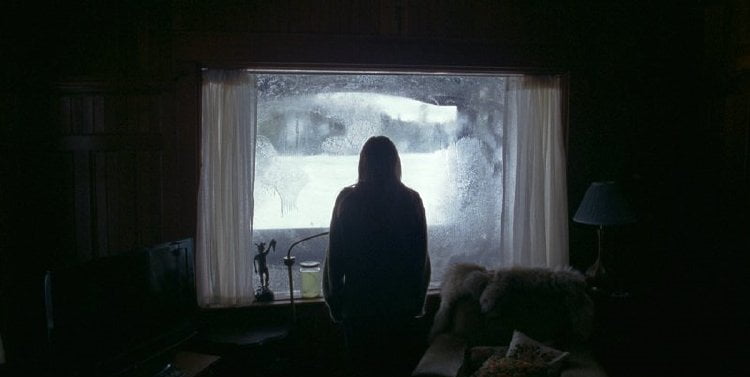 After his wife Laura’s (Alicia Silverstone) tragic reaction to the news he would be wedding his girlfriend Grace (Riley Keough), Richard (Richard Armitage, "The Hobbit" trilogy) ignores the hostilities of his children Aidan (Jaeden Lieberher (now Martell), "St. Vincent," "Knives Out") and Mia (Lia McHugh), arranging for them to be left alone with his psychologically troubled intended until he can rejoin them for the Christmas holiday at “The Lodge.”

Cowriter (with Sergio Casci)/directors Severin Fiala and Veronika Franz repeat the basic outline of their Oscar nominated “Goodnight Mommy” with a mother figure trapped in a remote location with two suspect kids, the season flipped from summer sunshine to winter white. The film fictionalizes the real life Heaven’s Gate cult suicide overlaying it with visuals from “The Shining” and the prophetic doll house tableaux from “Hereditary.” It’s not as horrific as their 2014 film (which itself drew from 1972’s “The Other”), nor as satisfying, but the filmmaking duo prove themselves adept with minimalist production design (Sylvain Lemaitre) and Christian symbolism.

There is a dual credibility stumble at the start when two parents each make a decision that fails to ring true, but the stunning visual of black balloons rising around a concrete crucifix distracts, as does Mia’s hysterical conviction that mom is ‘not going to go to heaven.’ Soon the meek (and aptly named) Grace is holding out a tentative olive branch during the newly formed foursome’s snowy road trip to their remote cabin, but she is quickly cut down during her first attempt at skating when Aidan informs her she is wearing their mother’s hat. After almost drowning when the ice gives way as she attempts to rescue Mia’s doll (which wears the same style of red knit hat she’s just surrendered), she assures Richard she’ll be OK alone with these two as she hides a bottle of pills behind her back.

Aidan, in particular, has a plan, one he sets in motion after researching Grace’s troubled past as the 12 year-old daughter and only survivor of a cult leader’s apocalyptic teachings, a mass suicide we witness over and over via Grace’s nightmares. First her little white dog Grady disappears. Grace steps out of a shower to discover a heart-encircled ‘Mom’ traced in the steam of the bathroom mirror, Aidan observing from the hallway. Power is lost, along with the Christmas decorations Grace has put up, the food in the fridge and her belongings, including wrapped gifts and her prescription. The next message she receives isn’t ‘Mom’ but ‘Repent,’ just before she makes a sacrifice to attempt to save them all.

From the arrival scene at the lodge which cinematographer Thimios Bakatakis ("The Lobster") has composed to mimic the Overlook Hotel in miniature to the roving through the rooms of a creepy dollhouse which seems to foretell the future, one continually notes references to better horror films. The pattern made by the crucifixes which cover a wall in a video of Grace’s dad is repeated in Mia’s bedroom, a locked building Grace comes across during a trek through the snow also forming a cross, its top floor reflecting the lodge’s attic room, as Grace’s past bleeds into her present.

But the film’s themes of Christian guilt don’t amount to much in the end, its climax more of a been-there, done-that deflation. “The Lodge” gets more mileage out of a creepy bowl of sea monkeys in a clear case of style over substance.