The Legend of Rita 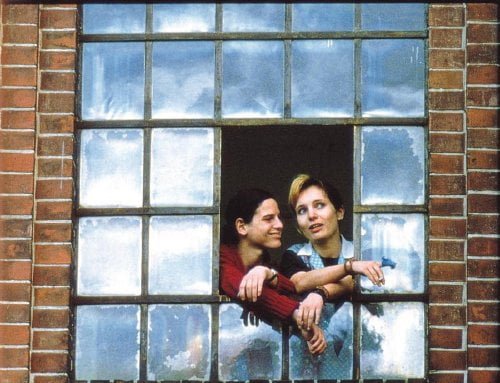 Rita Vogt (Bibiana Beglau) is an idealist in 1970's West Germany. She's also a terrorist, partially because of her love for Andreas Klein (Harald Schrott), the movement's leader. Rita is caught during transit from Beirut via East Berlin with a pistol and comes to an understanding with Stasi officer Erwin Hull (Martin Wuttke) who will become the dominant force in her life.

When a guard is shot during a prison break for Andreas, the group goes underground in Paris. Rather than blow her cover over a traffic violation, Rita shoots a policeman, then turns to Hull for help in director Volker Schlondorff's "The Legend of Rita."

Screenwriter Wolfgang Kohlhaase researched West German terrorist groups, in particular the Baader-Meinhof gang, to capture the characteristics of this part of an era for his fictional story, while director Schlondorff emphasized exploring pre-unification East Germany.

'Legend' is a Stasi (East German secret police) term for a false identify, something Hull offers all of Rita's colleagues if they remain in East Germany. When her colleagues decide to flee to Beirut, Rita, disillusioned with Andreas' personal disloyalty, stays behind and becomes Suzanne Schmidt. She attempts to fold into life as a fabric printer in a factory, but her passionate, idealistic nature makes her coworkers take notice. She takes interest in the rebellious, alcoholic Tatiana (Nadja Uhl, cowinner of the Best Actress award at the Berlin Film Festival with Biglau) whom the other women shun and raises eyebrows when she donates ten Deutschmarks to a charity her coworkers recognize as fraud.

Suzanne and Tatiana's story is reminiscent of the French film "The Dreamlife of Angels," but the friendship is cut short when Andreas' death, publicized on international news, reminds viewers of the wanted Rita Vogt. Hull creates Rita's next legend as Sabine Walter, a child care worker at a summer camp. Jochen Pettka (Alexander Beyer) takes interest and wishes her to marry him and return to Russia - time for Hull to step in again and give Rita a new life.

The Hull/Vogt relationship resembles that of Tcheky Karyo and Anne Parrilaud in "La Femme Nikita," wary and somewhat disapproving at first, respectful and romantically inclined after time. Martin Wuttke, who resembles Denis Lavant of "Beau Travail," gives a subtly shaded performance that keeps his presence felt throughout the film. He's as caught up in the turmoil of the times as Rita, particularly when East Germany's duplicity in their dealings with West German terrorists comes to light when the wall falls. Biblau, in her feature film debut, gives a star making performance as Rita. Her idealism cuts through her bourgeois background giving her strength and confidence. Biblau mows down authority figures in her path with sheer determination and approaches each new legend with clear-eyed curiosity. She almost makes us forget that her fearless character is still a cop killer and terrorist.

Support is solid with Uhl standing out as the bleery young Tatiana, so determined to leave the East she'll go via vodka if no other transport is available. Also notable is Jenny Shily as Fredericke, another young idealist who turns away from a moneyed life of horse riding championships to commit crimes for Andreas. She's not as capable as Rita, offering a nice contrast.

Director Schlondorff takes a (mostly) debut cast and gets realistic, powerful performances. His work with screenwriter Kohlhaase makes "The Legend of Rita" work on many levels - as a character study, a political and historical document and a contrast of East and West. Cinematographer Andreas Hofer provides a documentary look which works well for the story.

In the 70's, militant idealism swept through the youth movement in West Germany. For Rita Vogt (Bibiana Beglau), it is the most exciting time of her life. She believes in a just world, built on violence if necessary, and is in love with charismatic leader, Andi (Harald Schott), of their little group of revolutionaries. The gang robs a bank as their first strike against capitalism and the die is cast for the rest of their lives.

When Rita passes through East Berlin in transit from Beirut, a hidden pistol is found in her bag and she comes under the scrutiny of East German security in the person of Stasi officer Edwin Hull (Martin Wuttke). The secret policeman lets her pass through to the west, where Rita gets involved in a botched jailbreak for Andi. A guard is killed and the gang must go underground to avoid arrest. The movement remains stagnant for years and everyone grows complacent in their Parisian exile until, one day, Rita is stopped for a routine traffic violation. She tries to run for it and becomes a cop killer in the process. Her only out is asylum in East Germany and her first legend - factory worker Susanne Schmidt - is born.

Rita/Susanne must now live the life she has idolized for all these years and is content with her new world where there is no wealth, but no poverty, either. These feelings aren't shared by her friend, Tatjana (Nadja Uhl), who just wants out of the East, even if it is with the help of a stolen bottle of vodka. Their deepening relationship is abruptly ended when the news reports Andi's death in a skirmish with the police. Rita's old wanted poster is broadcast on TV and she must seek a new legend.

Hull arranges a new identity for Rita as Sabine Walter, a child-care worker, and she enters the happiest time of her life. She meets a young physicist, Jochen (Alexander Beyer), and, for the first time, falls in love with something other than the cause. Rita's dreams, that summer, of living happily ever after in the worker's paradise will soon be dashed when, in 1989, the Berlin Wall came down and Rita loses her protectorate.

Volker Schlondorff brings us a fictional look into a period of our history that is relatively virgin territory. Only the recent "Invisible Circus" comes to mind and that runs a pale second to "The Legend of Rita." The helmer, with screenwriter Wolfgang Kohlhasse, examines the life of one young German radical, Rita, and her flight from the law as she seeks asylum in East Germany. He succeeds in developing a character study of a woman whose rash youthful decisions marks her for life. Newcomer Beglau gives a commanding performance as Rita and matures nicely as she struggles to maintain her idealism after her fateful decision to pull the trigger on the gun and murder a policeman, a rash act that changed her life forever.

Although the focus of the entire film is on Rita, the supporting cast does a good job in fleshing out those around her. Martin Wuttke is outstanding as Stasi copper, Hull, and conveys the controlling nature of the totalitarian Communist government whose policy is "we're for the people, that's why we're against them." Nadja Uhl is believable as the desperate Tatjana who doesn't see her "paradise" through same idealistic glasses as Rita.

Schlondorff, with a veteran team behind the camera, gives the film a sound period feel of the 70's and 80's. The flick has a docu quality in its realism, provided by cinematographer Andreas Hofer. Costumer Anne-Gret Oehme and make-up artists Jeanette-Nicole Latzelsberger and Karin Stephan do a seamless job of clothing and aging the characters over a decade plus time, oftentimes as disguises to hide the fugitives' identities. Cheesy East German rock music works wonderfully in putting you where the filmmaker wants you to be. Rita's struggles with right versus wrong, good versus evil, makes for an interesting study of a world little known.