The Legend Of Bagger Vance 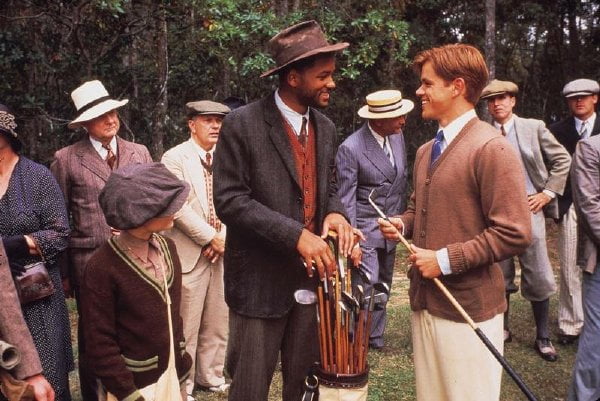 Runnulph Junuh (Matt Damon) had it all. He was a golf prodigy with a promising future and a beautiful, wealthy young girlfriend, Adele (Charlize Theron), whom he loved madly. Then, the world was plunged into the Great War and Runnulph went overseas to do his patriotic duty. The horrors of WWI and the gruesome loss of his entire command drove Junuh to disappear from all he knew and the life he loved in Savannah. He reappears unexpectedly over a decade later to find that Adele is facing bankruptcy. She arranges "the greatest golf exhibition on the best course" and Junuh is reluctantly recruited as Savannah's favorite son in "The Legend of Bagger Vance."

Rannulph Junuh (Matt Damon) has it all. He's an amateur golf champion whose girlfriend, Adele Invergordon (Charlize Theron), is the beautiful daughter of Savannah's wealthiest man. However Junuh is so traumatized by his experiences in WWI, he returns to Savannah a broken man. He makes no attempt to see Adele, preferring to play cards in a shack on his estate and drink to forget.

Meanwhile, Adele has lost her father and is on the brink of losing his last creation, the Krewe Island golf resort, because of the depression. She sells all she has to come up with a $10,000 golf exhibition prize and charms the era's two (real life) greatest golfers, ladies man Walter Hagen (Bruce McGill, "The Insider") and Ivy League grand slammer Bobby Jones (Joel Gretsch, TV's "The Bold and the Beautiful") to compete, but Savannah demands one of their own play. Young Hardy Greaves (J. Michael Moncrief, Jack Lemmon in present day), the story's narrator, proposes Junuh and bicycles off to deliver him.

Junuh declines Hardy, but goes out to swing a few anyway. Out of the darkness arrives a stranger, Bagger Vance (Will Smith), who offers to caddy for Junuh for $5 guaranteed. Bagger has a way of talking Junuh back into his game and soon Savannah is gripped in a home town media frenzy.

"The Legend of Bagger Vance" is a signature Robert Redford film, evoking his starring turn in "The Natural" and the nostalgic glow of his own "A River Runs Through It." Golf is used as a metaphor for life as Bagger advises Junuh and his young protege Hardy 'you can't win the game, you can only play the game,' and 'find your place in the field - you need to find your swing - get out of its way and let it find you.'

The cast is generally fine. Smith holds back, speaking softly, letting his words form a whisper cloud around Junuh's head. His non philosophical comments lend the film most of its humor. It's a confident performance. Damon is OK, if unexceptional as the conflicted Junuh, although he does have a real shining moment when he explains to Hardy why he drinks. Theron's mostly decorative, with a Southern accent that wavers in and out.

Character actor Bruce McGill is fun as the lusty Walter Hagen. His golfing style, where severe missteps are countered with brilliant catchup maneuvers, is fun to watch, particularly when he's sizing up his next move, barefoot in water wielding his ever present smoke. Even better is Joel Gretsch as the amazingly talented Bobby Jones. It's Gretsch, not Damon, who's the real Redford Golden boy standin. He creates an elegant, upstanding athlete. Young Moncrief has a wide-eyed face and displays real enthusiasm for the game of golf and hero worship of Junuh.

Redford really involves us in the two day 36 hole game, visualizing the act of focus and creating suspense in the outcome. Unfortunately his present day bookending of the tale with Jack Lemmon recalls the similarly poor use of the device in "Saving Private Ryan." The central romance is underbaked as well, mostly because we're not given enough background on why Adele remained single for a decade. The script rather lamely has them declare their attraction as 'dancing well together.'

Production and costume design are first rate. Several scenes set at the resort recall the period flashbacks of "The Shining."

If you can invest in the mysticism of Will Smith's supernatural Caddy (the only black man apparently admitted into Krewe Island's locker room) and the old-fashioned storyteling/filmmaking on display here, you may be surprised at the rewards to be found. Cynical filmgoers should avoid this one.

Director Robert Redford, from the very start with his Oscar winning "Ordinary People" through "A River Runs Through It" and "The Horse Whisperer," has given his films a uniquely atmospheric feel that is his signature. He continues to show his individual auteur with "The Legend of Bagger Vance," this time taking on the fantasy story about a fairy godfather who arrives on the scene at just the time when our hero needs help the most. It's a trite, near overdone tale that benefits from the strong performances of the leads, solid supporting cast and high-grade techs. Redford isn't a shabby director, either.

While Bagger Vance (Will Smith) is an obvious Zen master, he, fortunately, isn't forced to recite such homilies as "be one with the ball," but screenwriter Jeremy Leven comes close. "It's you, that ball and that flag," says Bagger to the troubled Runnulph after the mysterious man appears out of nowhere and offers to caddy for Junuh for "five dollars guaranteed." It does get a bit cliched as Bagger gives his homey advice and observations, like: "You lost your swing. We gotta find it," and "Let it [the shot] choose you." Smith's wry demeanor and likable presence helps the filmmakers get away with such obvious Yoda-isms.

While Smith revels in his down home rendition of Junuh's mentor and trainer - he's a mix of the aforementioned Yoda, Mickey for "Rocky" and a little bit of "E.T." - Matt Damon gives the most complex arc to his performance as the insecure, troubled Runnulph. It's a subtle perf by Damon that effectively uses facial expression to build his character, showing both angst and determination.

When young Hardy Greaves (J. Michael Montcrief) spots Junuh returning to Savannah after many years, he immediately starts campaigning to get the former golf genius as the local contender in Adele's $10,000 purse tournament. Against his will, Junuh agrees to play and picks up his sticks to learn the game again (and, maybe, rekindle something with Adele). Out of the darkness comes Bagger Vance who immediately starts to rag on Junuh good-naturedly, helps him find his game again and gets an agreement to be caddy for the big match.

Once the fairy tale is established, the film gets down to the game. Runnulph is playing two of the best in the business - Bobby Jones (Joel Gretsch) and Walter Hagan (Bruce McGill) - and they are more than a match for the insecure Junuh. He immediately falls behind and it looks like the citizens of Savannah are about to have their hopes of a victorious local dashed. Bagger doesn't perform any magic except to open Junuh's eyes with the help of Hardy, who absolutely idolizes Runnulph. The golf play is nicely done as the game becomes a metaphor for life. Junuh finds his original swing.

The story shows its literary roots (the novel is by Steven Pressfield) with plot threads that are separate from the main yarn. There is a nice little subplot involving Hardy and his dad. Because of the catastrophe of the Depression, Hardy's father, Frank Greaves (Trip Hamilton), is forced to take a job as streetsweeper in Savannah. This is a point of humiliation for the boy who is ashamed of the lowly job his father takes. Junuh helps Hardy learn the truth about his father, a truth that turns the boy's eyes from admonishing to admiring, making the small side story a nicely sentimental one.

Backing up Damon and Smith are several good performances, especially an endearing one by young Montcrief. The debut perf is an assured and varied one as Hardy exhibits expressions of wonder, shame, happiness and sadness. Joel Gretsch and Bruce McGill flesh out their characters of Jones and Hagan. Bobby Jones is elegance in motion and Gretsch captures this gracefulness perfectly, while Walter Hagan represents raw power and endurance, also captured well by McGill. Both men display the honor of fair play and giving the game their best. The two actors get past the symbolism of their characters and make them real people. Charlize Theron is only OK as Adele, but hers is the toughest kind of role - the neglected/abandoned fiance.

Tech credits, as you would expect in a Robert Redford film, are of the highest caliber. Michael Ballhaus, who collaborated with Redford on "Quiz Show," gives the film an atmospheric look that captures the sultry warmth of Savannah. The lush photography is coupled with an outstanding period production design by Academy Award winner Stuart Craig and stunning costume, especially for Theron, by Judianna Makovsky. Musical score, by Rachel Portman, and songs of the time help to carry forth the period feel.

The fairy tale nature of "The Legend of Bagger Vance'" (though the "legend" is never discussed) has been done many times before, but the good natured outlook and mysticism of Bagger makes this an entertaining film that has no golf prerequisite.