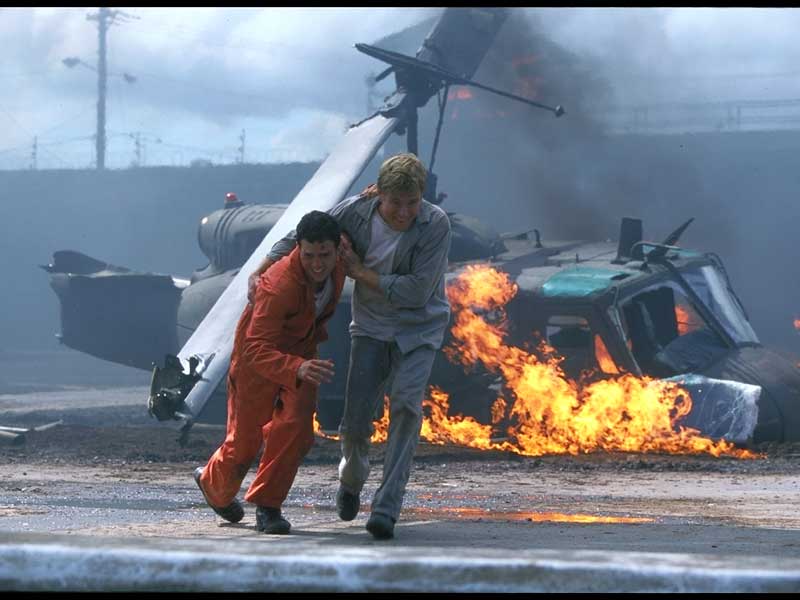 When legendary Army general Eugene Irwin (Robert Redford) is court-martialed, stripped of his rank and sent to a maximum security military prison called the Castle, his plan is to shut his mouth and do his time. But, when he confronts the prison's martinet commander, Colonel Winter (James Gandolfini), about the latter's iron fist methods that may have resulted in murder a showdown is in the making and it is right versus wrong in helmer Rod Lurie's "The Last Castle."

When former General Irwin arrives at the Castle, he meets with the warden, Winter, and declares he just wants to do his time and go home to his family. The rules of the Castle, for its prisoners, are no saluting, no recognition of rank amongst the inmates. The ex-commander understands this, but the aura of his past greatness influences the other prisoners, especially a young marine corporal, the slightly slow-witted and stammering Aguilar (Clifton Collins Jr.). The naïve prisoner is in awe of the former general and salutes the man, against prison regulations. The boy is punished, severely, beyond the rules of incarceration and Irwin gets an inkling that there may be something wrong, even sadistic, about Colonel Winter's command.

The original story, by David Scarpa (with the screenplay co written with veteran scribe Graham Yost), starts off feeling a lot like an earlier Robert Redford film, "Brubaker." In both films his character is thrust into the prison population and observes abuses by those in charge. The similarity ends early on as Irwin begins to see that the prison population is treated as non-human and without dignity by their warden. The inmates are required to build a wall, a leftover when the prison was first built over a century ago, as a form of "therapy" devised by Winter. Irwin sees the chore as something more liberating for the incarcerated military men and encourages them, especially Aguilar whose father is a stonemason, to build it the right way. The warden sees Irwin's intrusion as an attempt to usurp his power and a deadly confrontation ensues, resulting in an execution-like killing.

This begins a battle of wills between the two senior officers. Winter, concerned with maintaining control of his command, tries to break the ex-general's resolve to lead the men of the prison yard in revolt. As Irwin's defiance to the colonel escalates the stakes are raise and the tensions eventually reach a fevered pitch. Irwin will accept nothing less that the resignation of the warden for his malfeasances and declares that he and the prisoners are going to take over the Castle - raising Old Glory, upside down, over the prison when they succeed. The challenge results, as expected, in a pitched battle between Winter and his guards and the unified force of the now-organized prisoners under Irwin.

Helmer Rod Lurie and crew create a prison film that is well paced and interesting without being flashy (until, that is, the final climactic battle where the Hollywood special F/X machine and the requirement for major leaps of faith take control of the flick). The story about two strong-willed men butting heads is a broadly painted right-versus-wrong yarn that pits the honorable ex-general against the power hungry warden. Irwin sees the battle as a chess game with the hearts and minds of "his" men, the inmates of the Castle, at its core. Winter is more concerned with his career rather than his wards and, in the final showdown, it is easy to see who you want to be the winner.

Robert Redford is cast somewhat against type as the much decorated General Irwin. The actor's persona usually puts him into more liberal character roles, but the inherent goodness of the general, more like Omar Bradley than George S. Patton, fits the actor and he gives a solid perf. James Gandolfini, too, does not get his usual, tough bad guy character, although Colonel Winter is far from being good guy, especially as the story progresses and his position of authority is questioned. Mark Ruffalo has the pivotal role as bad boy, Yates, a West Point grad who made some bad career decisions and landed in the Castle. Unfortunately, I never believe his character as either an ex-Army officer or as an inmate/bookie who, for some reason, Irwin trusts. The rest of the supporting cast is made up by mostly unknowns who do a superb job of fleshing out their small roles as the prisoners and guards of the Castle.

Techs are first-rate across the board. Production designer Kirk M. Petruccelli creates a realistic world in the Castle, an old end-of-19th century southern prison that is supplemented nicely with the addition of the Tiers, the multi-level cell area that holds all of the prisoners. Costume design, by Ha Nguyen, has the required military look and feel and arc well with the movie as the prisoners discard their individualistic dress, as Irwin's influence takes hold of them, and begin to dress in the "uniform" look of soldiers, even in their prisoner garb. Shelly Johnson's lensing is both fluid and graceful from start to finish, even for the overblown finale.

The military code of honor and aspects of the etiquette of the warrior is interleaved throughout the film, but avoids being preachy. We learn the origins of the salute and the intent and evolution of the fortress, along with concepts of honor and justice. "The Last Castle" is a well-crafted film that works most of the way through, but gives way to the bombastic ending that detracts from the overall impact.