The King Is Alive 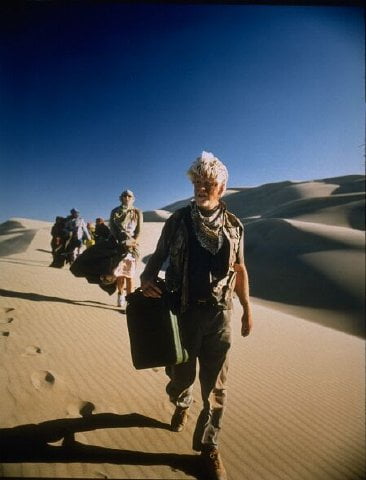 A missed plane changes the itinerary of a small group of European and American tourists so they're put on a bus to make their next connection.  Liz (Janet McTeer, "Tumbleweeds") frets that the journey is taking too long and is fed comforting words by her husband Ray (Bruce Davison, "X-Men").  But when night turns into day, they discover that the compass bus driver Moses (Vusi Kunene, "The Air Up There") has been relying on doesn't work.  Stranded in an abandoned mining town 500 miles from anywhere, English actor Henry's (David Bradley, "Prick Up Your Ears") idea of staging 'King Lear' sets the stage for the full range of human emotion in "The King is Alive."

Cowriter(with Anders Thomas Jensen)/director Kristian Levring is the fourth founder of Dogme 95 (along with Lars von Trier, "Breaking the Waves;" Thomas Vinterberg, "The Celebration;" and Soren Kragh Jacobsen, "Mifune"), making his feature directorial debut with "The King Is Alive."

The ensemble cast create unique and complex characters that form a microcosm of society. Jack (Miles Anderson, "Cry Freedom") is the adventurer, who gives the group the five rules of surviving in the desert before setting off for help. Henry is the artist whose exercise of writing out the roles of King Lear from memory casts him as the group's director. Drawn to him is Catherine (Romane Bohringer, "Colonel Chabert"), a young French woman who fancies herself an intellectual yet turns down the offer of Cordelia's part. That goes to Gina (Jennifer Jason Leigh), an American vamp disdained by Catherine but looked upon fondly by Henry (and lasciviously by the other white males). Paul (Chris Walker) is a coarse, loud Englishman accompanied by mousy wife Amanda (Lia Williams) on a trip designed to bond with father Charles (David Calder, "The World is Not Enough"). Ray and Liz are a married couple whose suppressed accusations don't withstand the first evening's alcoholic blowout. Ashley (late character actor Brion James, to whom the film is dedicated) is the initial Lear, done in by the DTs. Local Moses is the object of scorn, lust, revenge and racism. Kanana (Peter Kubheka, "The Air Up There") is a hermit found in the village who acts as the story's narrator.

Levring and Jensen use 'King Lear' as a springboard for alliances, cliques, divisions, betrayals and ultimately madness. Yet for all the fascinating behavior so finely created by the cast, the screenwriters overindulge with several melodramatic sexual alliances - lust in the dust indeed. These people may have something to prove, but Levring so ably makes us feel his characters discomfort ('I feel like a pig! I want a bath!' proclaims Liz) that sex seems an unlikely outlet for them. Gina's sacrifice for her 'art' via a most unlikely pairing plays especially false despite the actors' craft. Still, the dialogue is often devastating. Newly awakened Amanda tells Paul 'I knew you were nothing special but I didn't let that bother me because I wanted a peaceful life.'

Using three handheld digital video cameras, Levring achieves a rich, color-saturated look at his exotic location of Kolmanskop, Namibia which is truly the star of his film. The ever shifting sands provide texture, Gina's lip gloss and chartreuse satin shirt reflect light and splotches and streaks of paint on interior concrete walls provide both character definition and a modern art background. Editor Nicholas Wayman Harris makes offbeat, unusual choices. A one second cutaway of a woman's midriff from a closeup of her face punches up the montage. The sudden lack of sound during aerial shots intensify the utter isolation while allowing us to soak in the spectacular beauty of the terrain uninterrupted.

"The King Is Alive" attempts to encompass the human condition via a woefully off course tourist bus. Despite a couple of wrong turns, it takes us to places both known and uncharted.

A disparate band of travelers is stranded in a remote part of northern Africa. They take the only means of transportation, a bus, across the desert to safety. But, a faulty compass causes them to stray 500 miles out of their way when the bus breaks down. One intrepid member of the troupe heads off, alone, for help. The rest are left to fend for themselves in latest of the Dogma 95 manifesto films, "The King Is Alive."

Helmer Kristian Levring provides the fourth installment in the stripped-down film aesthetics of the Dogma 95 movement founded by the director and Lars Von Trier. The intent of the movement is to bringing filmmaking back to its essence - no artificial props, lighting or sets, no sound effects or special visual F/X, location shooting only, etc. Levring is fulfills the dictates of the Dogma Manifesto with his story of a journey of lost souls.

When the dozen or so passengers find themselves stranded at an abandoned mining town hundreds of miles from nowhere in the middle of Africa's Namib Desert, they have nothing. The man with survival experience, Jack (Miles Anderson), treks off to find help after explaining the five rules of survival to those remaining - find water, find food, find shelter, stay visible and keep your spirits up.

One of the group, Henry (David Bradley), a stage thespian, realizes the dire strait they are all in and begins to write out all the roles to Shakespeare's "King Lear," mainly to kill the time and keep his sanity. When he suggests to one of the others, a feisty French girl named Catherine (Romane Bohringer), they read the play and learn the parts as a panacea for their dilemma, she glibly turns him down. But, as things get worse and their isolation continues, the appeal to take part in the play increases amongst them all, with each succumbing to the relief the project offers.

As Henry's idea unfolds and takes shape with the players, there is dissention in the ranks as infighting breaks out. Husband and wife Ray (Bruce Davison) and Liz (Janet McTeer) are in conflict as Liz, disillusioned with Ray, humiliates him by openly trying to seduce the other men in the troupe. Amanda (Lia Williams) soon realizes that her significant other, Paul (Chris Walker), is a bully and a pig and wants nothing to do with him. Catherine thinks that Gina (Jennifer Jason Leigh) is just another clinging, needy American, while older Charles just wants carnal knowledge with Gina to prove his masculinity - to himself. Ashley (Brion James) is an alcoholic who, because of the forced isolation without the benefit of booze, is suffering from a severe case of the delirium tremors. The problems facing the stranded travelers do not recede at all and the readings begin to have the cathartic effect that Henry hoped for.

Lenser Jens Schlosser ably captures the wind and sand blown location of the African desert with the gently rolling, and incredibly cruel, sand dunes bringing a flowing grace to the panoramic photography. There are a couple of scenes, obviously shot from an airplane, that show the stark vista of the desert that reminds of the striking desert photography used in "The English Patient" and Bertolucci's "The Sheltering Sky." And all this with a hand-held digital camera.

The story, by Levring and Peter Aalbaek Jensen, required much dedication of purpose by the cast, but tends to keep the viewer at arm's length. There are so many subplots and intrigues between and among the characters, it becomes difficult to empathize with any of them. Not enough time is given to any one player to allow you to know or care about them. The actors do a solid job in each portrayal, but there is not enough time to really flesh anyone out to three-dimensional proportions.

The whole Dogma 95 movement may be a filmmaking tempest in a teapot, but there is a sincere honesty in the craftwork and artistic thought to the story that make a film like "The King Is Alive" an intellectual treat in the desert of Hollywood's summer fare.