The Kid Stays in the Picture 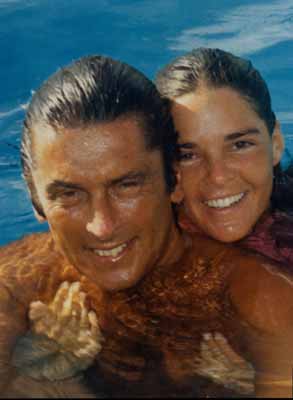 Robert Evans was a young executive in his brother's NYC based Evan Picone fashion empire when he made a trip to Los Angeles that would change his life. Lying by the pool at the Beverly Hills Hotel, he attracted the attention of Hollywood royal Norma Shearer, who asked him if he'd be interested in portraying her late husband, Irving Thalberg, in a Jimmy Cagney film. Evans was good looking, but not the greatest actor. Instead he aspired to become a mogul like the man, Darryl F. Zanuck, who saved his bullfighting role in "The Sun Also Rises" by informing all the naysayers on set "The Kid Stays in the Picture."

This is the title of Evans' 1994 memoir, which he also narrated as an even more entertaining audio book in 1997. When directors Brett Morgen & Nanette Burstein ("On the Ropes") approached Evans to make a documentary they discovered that Vanity Fair editor Graydon Carter owned the rights to "The Kid." Joining forces with Carter, the directors had to shift from photographing Evans today to becoming archivists who would pictorialize a 90 minute version of his 6 hour audio book. Unfortunately, the strain shows.

Evans is a legendary Hollywood player. When Peter Bart (currently Variety's editor in chief) wrote up an article about the East Coast executive who was also a West Coast movie star for the Sunday New York Times, it caught the eye of Gulf+Western chief Charlie Bludhorn, who offered Evans the chance to run Paramount Studios, then the ninth ranked in Tinseltown. Evans brought Bart in as his right hand man, and by focusing on writers and going for the unusual, turned Paramount into the number one studio within four years. Beginning with the smash success of "Love Story," which would couple Evans with his fourth wife, 'Snotnose' McGraw, Paramount was a heavy hitter in the glory days of the 1970s with such films as "The Godfather," "Rosemary's Baby," "Harold and Maude," "Medium Cool" and "True Grit."

Evans bought his dream home, Woodland, and counted Warren Beatty, Jack Nicholson, Dustin Hoffman and Henry Kissinger among his pals. The dream all came to a crashing halt in the 1980s when a cocaine bust coupled with a scandalous murder connected to Evans' production of "The Cotton Club" ushered him off the Paramount lot and into depression. Past friendships (Jack Nicholson helped Evans buy back his house and Stanley Jaffe, who directed "Goodbye Columbus" for Evans, gave him a Paramount office) and his ability to sell himself have brought Evans back as a film producer. "The Kid Stays in the Picture" is no small calling card itself.

As theatrical red curtains open for a tour of Woodland, that oily huckster's voice begins to tell his own story. 'There are three sides to every story: yours...mine...and the truth.' There's no doubt which version we get here, but who cares when the guy telling it is such a master of the anecdote as well as his own mythology? But the filmmakers detract from the story.

Morgen and Burstein use still pictures with figures cut out to give depth of field. They then animate them with the likes of cigarette smoke and projector flickering or by superimposing newspaper articles. While this approach is initially clever, ultimately their constant camera movement and repetition of ideas become tiring. Matching footage of Evans' productions to his recollections of their making is an obvious choice, but using his films to 'illustrate' other moments of his life is dubious and illogical. While the 'documentarians' provide some filmic interest with Evans' screen test with James Cagney, behind the scenes footage of "Rosemary's Baby," and Dustin Hoffman doing an in-joke filled parody of his friend, mostly their choices distract from, rather than enhance, Evans' own storytelling.

Some of Evans' best stories were cut for lack of time. Watching "The Kid Stays in the Picture," you'd never guess the man had been married more than once. His battles with Coppola over "The Godfather" are given short shrift - what about the tussle over casting Pacino (Evans eventually relented only when Coppola accepted Caan as Sonny)? Evans' mercurial relationship with Bludhorn, whom Evans' has a blast imitating, isn't given much depth and Bludhorn's death is never mentioned.

"The Kid Stays in the Picture" is a great story, terrifically told by the man who wrote it but this Cliff Notes edition is a cheat.

Robert Evans, the famed Hollywood producer and Paramount studio head (1966-1974), was responsible for some of the most seminal films of the 60's and 70's, including such classics and blockbusters as "Rosemary's Baby," "Love Story," "Chinatown" and "The Godfather." He has also had love affairs with some of Tinseltown's most beautiful women, such as Ava Gardner, Grace Kelly, Lana Turner, Ali MacGraw and Raquel Welch. His tell-all autobiography became the new producer's primer and the book-on-tape adaptation, read by Evans himself, is considered a classic. The documentary film version of Evans's autobiography is now with us in "The Kid Stays in the Picture."

Evans's Hollywood career began, inauspiciously enough, poolside at the Beverly Hills Hotel. The good looking and charming young man captured the eye of silver screen legend Norma Shearer who asked Evans to play the part of her late husband, movie mogul Irving Thalberg, in the James Cagney starrer "Man of a Thousand Faces." Thus bitten by the film bug, he landed a part in The Ernest Hemingway story, "The Sun Also Rises," where uber-producer Darryl F. Zanuck made the title statement after the film's cast and crew demanded that Evans be fired. His performances in "The Fiend Who Walked the West" and "The Best of Everything" reinforced his desire to make films, but as producer and not actor.

An "Arts & Leisure" profile of Evans in The New York Times brought the young producer to the attention of Gulf + Western honcho Charlie Bludhorn, who hired him as European production head for G+W acquisition, Paramount Pictures. Then, almost immediately, Bludhorn promoted the novice to be the new head of production for all of Paramount. During his eight-year sojourn in charge Evans took the company from #9 in the industry to be #1 at the box office. During this tenure, besides the above-mentioned works, Evans was also responsible such Paramount successes as "The Odd Couple," "Romeo and Juliet," "True Grit" (winning John Wayne his sole Oscar), "The Conformist," "Harold and Maude," "Serpico" and many more.

Docu filmmakers Brett Morgan and Nanette Burstein took on the difficult task of adapting the many hours of literary material that is Evans's autobiography and condensing it into something both coherent and complete. Unfortunately, the job is a big one and, even with the producer's voice over readings about his colorful life, doesn't approach the delight that the author's book-on-tape generates. By necessity, making a 90 odd minute documentary from such a wealth of information requires sacrificing something and the film of "The Kid Stays in the Picture" suffers for it.

Evans's gruff, street-wise voice is a pleasure to listen to and his narration fits the nature of the film. Sage advice, such as, "If you own the property you're a king. Without it, you're a peon," pepper the narration to good affect, but, the docu-makers have to pictorially realize the words, too, and this is where the film suffers most. Much of the visual life and times of Robert Evans has been recorded primarily in still, rather than film or video, photography. This required some clever creativity in "animating" the copious quantity of stills. Morgan, Burstein and their documentary team give it a good shot by taking the stills and giving them a 3-D treatment, sometimes animated, that works in the beginning. As the film progresses, it becomes obvious that the dearth of movement is stilting. Fortunately, the inclusion of clips from Evans's most popular, groundbreaking works helps to move things along for the first hour. These same excerpts don't fare so well in the film's finale as the conflicts within his movies become a metaphor for the later years' conflicts of Robert Evans.

The book, especially in its book-on-tape, read-by-the-author edition, is one of the most pithy, personally insightful looks into the professional world of Hollywood movie making. Evans's reading of his book is one of those high water marks in the recorded books genre. The film had extraordinarily large shoes to fill and had a couple of strikes against it before production even started. The makers give it a yeoman's effort but are hampered by the sheer scope of adapting down the mountain of anecdotes, legends, glitz and glimmer into a coherent documentary. In the book-on-tape market, the film of "The Kid Stays in the Picture" would be an abridged edition - something I usually avoid. My hopes were not met.