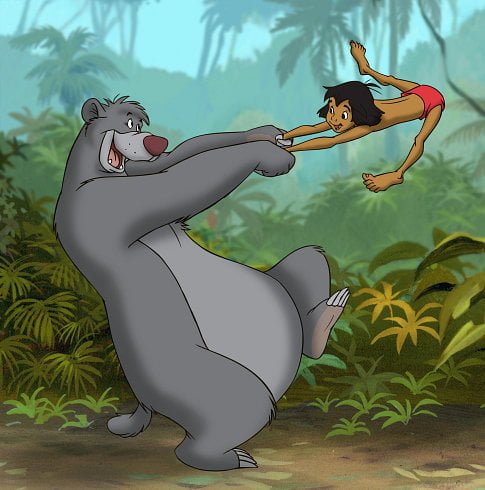 The original "The Jungle Book" was one of Disney Studios biggest hits and the last Mouse House animation directly supervised by the late, great Walt Disney, himself. That was back in 1967 and it has taken all that time to tell us what happens after the man-cub, Mowgli (voice of Haley Joel Osment), gave up his jungle home and the companionship of his best friend, Baloo (voice of John Goodman), to live with the rules of the human village in "The Jungle Book 2."

Disney studios seems to be getting into the habit of taking the second tier sequels of its classics that used to go direct to video, like "The Little Mermaid 2," "Aladdin 2" and " The Lion King 2," and making a run at the big screen before the little screen takes over. With such kids' flicks as "Return to Neverland" and "The Jungle Book 2" it's nice to see that the effort is being made to infuse these lower budget follow-ups with the same intent and quality, if not the scope, of the originals.

"The Jungle Book 2" is an example of a Disney animation that belongs on the pay-per-view and video store shelves but gives a good enough show to satisfy the Saturday matinee kid crowd. While it doesn't have the number of songs or the original source material (after all, "TJB" is a Rudyard Kipling story), the screenplay by Karl Geurs does a better than average job of creating a lively sequel.

Mowgli has been living in the safe, boring village since he was adopted by his little buddy Ranjan's (voice of Connor Funk) family and developed a crush on the girl, Shanti (voice of Mae Whitman), who got him to come out of the jungle in the first place. But, Mowgli can't forget his old best friend, Baloo (John Goodman), his beloved papa bear, and the laid back bruin, too, yearns to see his little man-cub pal. Even though the wise panther Bagheera (voice of Bob Joles) does his best to keep Baloo away from his friend, including the use of the dedicated pachyderms of Colonel Hathi's (voice of Jim Cummings) Elephant Patrol, it is all for naught.

Baloo may be simple but he certainly knows his own mind and he is able to get around Bags's defense, sneaks into the village to find his best friend, Mowgli, for a grand reunion. But, the noise over Baloo's quest reaches the ears of the wicked tiger, Shere Khan (voice of Tony Jay), who Mowgli bested in the original. When Baloo enters the village so does Shere Khan and a big commotion ensues with the villagers battling the dreaded tiger while Shanti and Ranjan set in pursuit of the bear and Mowgli, thinking that their friend is in danger. This begins an adventure that has everyone searching for Mowgli, friend and foe alike, with thrills, spills, songs and dance that will be one of the children's entertainment staples on home video.

My only complaint about "The Jungle Book 2" is that it could have used another song or two. The ones that are here, though, are good fun and well staged to toe tapping pleasure. The hipster "Jungle Rhythm," the reprised "Bare Necessities" and the super-fun, big scale Busby Berkeley-esque swing number, "W-I-L-D" are great fun to watch and listen to, for kids and adults both.

Animation is simple with set backgrounds but the quality of the character animation, the fine vocal performances, lively song-and-dance numbers and nice story make "The Jungle Book 2" a fun thing to see at the theater and worth the wait on home video (but you shouldn't have too long to wait). The kids are going to like it, maybe even love it.