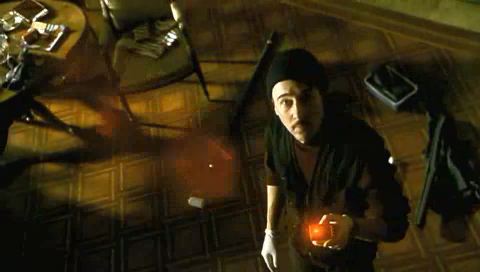 John Bridger (Donald Sutherland), just out of prison (once again), goes for one more heist and plans to make it his last. He assembles his old crew with his main man Charlie Croker (Mark Wahlberg) once again in the planning and tactics role and the team steals, under the very nose of the Mafia, $37 million dollars in gold bullion. But, one of their number, Steve (Edward Norton), betrays them all and absconds with everything, leaving John and the rest for dead. All but John survive and it is up to Charlie and his partners to get the loot back in "The Italian Job."

In 1969, Michael Caine played mastermind Charlie Croker and led such notables as Noel Coward and Benny Hill in a chase through the streets of Turin, Italy, in an army of Austin Mini Coopers as they stole $4 million in gold from the mob. The bulk of that film involved the heist itself and the kitschy getaway utilizing the diminutive Minis. That film was high on action and humor and didn't need to do a lot with character development.

Now, director F. Gary Gray takes Troy Kennedy Martin's '69 screenplay, adapted by Donna Powers and Wayne Powers, and updates it to present day Venice, Italy. This time around, the initial heist is fast paced and almost perfunctory as, in short order, the team of thieves infiltrate a Mafia-held building and steal a safe stuffed with bullion by blowing out the floor and dropping the box to the bottom of a canal. It is all very slick with the bad guys duped into chasing a fake safe while the robbers, clad in diving gear, pop the real safe open in 30 feet of water and empty it of the golden booty.

The team, consisting of John, Charlie, Steve, computer wiz Lyle (Seth Green), ace getaway driver Handsome Rob (Jason Statham) and partially deaf bomb master Left Ear (Mos Def), after their escape, debate what each will do with his share of the loot. Lyle wants a state of the art stereo that will blow the clothes off of his date (if he ever gets one). Left Ear wants a villa in Spain with a room specially built just for his shoes. Handsome Rob desires most an Aston Martin to pick up chicks. As John admonishes his friend Charlie to take his share and get out of the business, Steve decides that he wants it all - not just the dreams but all the gold, too - and guns down John. When the rest try to escape, their car falls into an icy river as Steve blasts away at the sinking vehicle. Through a plausible coincidence they all escape with their lives and not much else.

One year later Charlie has succeeded in tracking Steve, now Steve Frezelli, to LA where the traitor is living in the lap of luxury on the ill-gotten gains. Steve has the remaining bullion stashed in a high-tech safe, the kind that John used to be able to open in his sleep but an imposing obstacle for Charlie. But Croker will not be deterred and seeks out the one person who can handle the job - Bridger's daughter Stella (Charlize Theron). This is where the new "Job" departs from the original. The big heist is over and done with in short order and the story revolves around Charlie and company plotting to get their loot back. To spice up things from just another revenge flick, Steve shows just how bad a bas-ass he is and causes an incident that will involve the Russian Mafia and it will reverberate 'til the end. And it is a pretty satisfying ending even if they use (amusingly) the old cliché of filling in the viewer on what happened to the team after the movie ends.

Helmer Gray does a solid job in marshalling his considerable forces in front of and behind the camera. The large ensemble cast, overall, does a decent job in trying to give dimension to their sparsely defined characters. There is one exception. Ed Norton, who reportedly was somewhat forced into the role of Steve by the studio, is totally out of place as the bad guy. The actor is usually quite capable and sometimes brilliant but here he seems to want to be anywhere else but here. A more dedicated villain would have raised the ante a bit.

Fortunately, everyone else is giving their best and help to work their characters I with the action. Mark Wahlberg is competent as Charlie, though not someone I would pick as a "mastermind" and idea man. Charlize Theron, as John's daughter and an ace safe cracker, legally, in her own right, is a convincing character that would cross the line from legit to criminal out of revenge over her father's murder. The rest of the principles are all fine with Green a natural as the geek computer nerd who claims to be the inventor of Napster. Jason Statham is always a solid presence and is the Brit link, as Handsome Rob, with the '69 film's roots. Mos Deaf, while having some of the best one-liners as Left Ear, is wooden when compared to his colleagues. Alas, Donald Sutherland is out of the picture far too early.

Reasonable is a good word to describe the crafting of the story and situations in "The Italian Job." It is ironically funny that the new Mini has just recently gained popularity in America, just as it's neat little predecessor did not all that long before the original film came out. The Mini Cooper chase scenes, above and below the surface of LA, ranging from the streets to the subway tunnels to the LA River, are exciting and imaginative and made me want to get my hands on one of these tricked up little cars. Other special F/X, especially the biggie where they heist an armored truck in broad daylight (which gave me a belly laugh because of the sheer audacity of the idea and its execution), are a delight.

The new "The Italian Job" stands up for itself as a slick actioner that blends competent actors with a decent, well thought out script and mixes it all with highly crafted F/X and stunts in a visually stunning way (thanks to DP Wally Pfister) and may be one of the better action films out this summer. For a remake, it has a lot of originality.