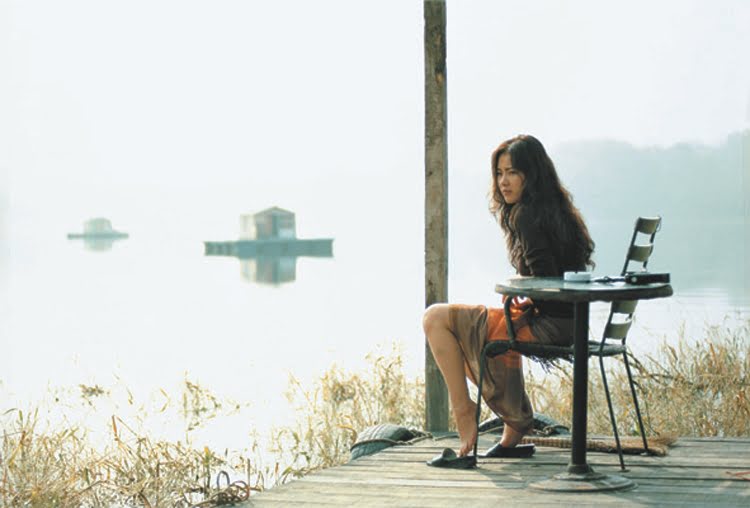 Hee-Jin (Suh Jung, "Peppermint Candy") survives by renting a few color-coded fishing pontoons and supplying their inhabitants with bait, supplies and prostitutes, or, should they choose, her own services. When one of her clients, Hyun-Shik (Yoosuk Kim), attempts suicide one evening, she saves him, and the two desperate souls engage in a dance of sex and death on "The Isle."

Writer/director Ki-duk Kim has created a quiet, pensive reflection on two unhappy people who connect via horrific acts of self-mutilation. While not for all tastes, "The Isle" is a compelling meditation, although unravelling its mysteries may require multiple viewings.

While the mute Hee-Jin would, on first impression, appear subservient to the men who rent her cabins, she holds their lifeline to shore in the guise of her leaky boat. Her elaborately stylized eyebrows suggest a Japanese kabuki mask - is Hee-Jin a natural spirit or witch of some sort?

Her customers are men grounded in bodily needs. They defecate into the water through trap doors in the pontoons or over the side, stop mid-thrust with a prostitute to reel in a fish. Hyun-Shik, though, is a more sensitive individual, an artist who creates mini-sculptures out of wire, clearly haunted by something in his past. Eun-A (Sung-hee Park), a girlish prostitute, likes Hyun-Shik despite his withdrawn nature, but Hee-Jin already has her hooks in him.

Animals of "The Isle" may be a metaphor for the human inhabitants. Hee-Jin rips apart a live frog to feed Hyun-Shik's pet, a caged bird. She strands her dog on a pontoon, but picks him up again.

A customer fillets the sides of a live fish to feed sashimi to his girl before throwing it back into the water (it is later recaught, its sides still stripped bare). When Hyun-Shik once again attempts suicide, this time with fishhooks, Hee-Jin props his mouth open to save him, making him resemble a gasping fish himself. Her own sexuality is later tied to the landscape.

Cinematographer Seo-shik Hwang photographs the lake like a strange little mirage enshrouded in mist. Characters are seen from above and below the water, sometimes separated from the foreground by glass. Ki-duk Kim has created a provocatively violent and sexual film with an oddly idyllic sensibility. It's a mysterious but ultimately rewarding experience.

Mute Hee-Jin (Suh Jung) runs a unique fishing resort on an isolated lake in South Korea. Each fisherman has his own little man-made island with a hut where Hee-Jin brings them bait, supplies and, for evening entertainment, prostitutes. One day, a young man, Hyun-Shik (Yoosuk Kim) arrives for "fishing" but is obviously hiding out. The beautiful, silent, mysterious boat girl takes a liking to him but, in this case, the love of a good woman will not necessarily solve Hyun-Shik's problems in director/writer Ki-duk Kim's "The Isle."

This is a strikingly beautiful film that has loads of atmosphere and gorgeous cinematography (by Seo-shik Hwang) that fits perfectly with the sparse dialog and moodiness of "The Isle." But, viewers be warned: this is not the kind of film that western audiences are used to seeing. I compare Kim's jarring view into the main characters' lives with Takashi Miike's bizarre, compelling (and gut-wrenching) 1999 film "Audition." While "The Isle" doesn't have the sickening violence of Miike's film (I still vividly recall the beautiful female antagonist sawing off the legs of her victim), there is a level of self-mutilation with fishhooks that many will find disturbing.

If you can get yourself by the graphic, self-abusive imagery of "The Isle" and immerse yourself in the near-silent aspect of the film, allowing the atmosphere to enfold you, I think you'll find the effort worthwhile. Hee-Jin's character is the mute beauty who, initially, also sells herself to her clients to make a little extra cash. But, the humiliation and scorn she faces turns her away from this type of service and she, instead, ferries local hookers to and from the fishermen's islands. Hyun-Shik's arrival and attempted suicide (remember the fishhooks I mentioned) changes everything for Hee-Jin.

Again, western viewers may have problems with the Korean cultural aspects of "The Isle." There is mistreatment of animals, particularly fish, that is both unnerving and bizarre - unlike the PC American films, animals were harmed in the making of "The Isle." In one instance, a live fish is filleted then put back in the water to swim away. I don't think we're watching special effects here so, again, viewer beware.

If you can get past the fantastical aspects and harsh realities of "The Isle" you'll get a sock-you-in-the-eye flick that is a visual tour-de-force and a story that is unlike any you will likely see anywhere else. It is not a film for most tastes and there were reports, on the festival circuit, of many walkouts and some people fainting over its unstintingly graphic nature. It will definitely make you see fishhooks in a different light.