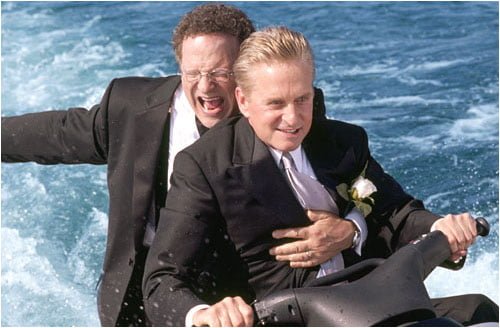 Steve Tobias (Michael Douglas) is an undercover CIA agent working to collar the buyer and seller of a Russian nuclear submarine. Jerry Peyser (Albert Brooks, "My First Mister") is a podiatrist with control issues and a cart load of phobias. Their only children are about to marry making them an extremely mismatched set of "The In-Laws."

Nat Mauldin and Ed Soloman, working with original 1979 screenwriter Andrew Bergman, deliver a remake defanged of the first film's absurdist humor by immediately making the audience privy to Steve's occupation and placing more squishy emphasis on family matters. Still Douglas and Brooks delve into the farthest corners of their opposite natures with
exuberance, providing the requisite number of payoffs for a mildly amusing comedy.

Director Andrew Fleming ("Dick") begins neatly with Steve making a narrow escape in Prague accompanied by a "Live and Let Die" cover on the soundtrack. Meanwhile Jerry is obsessing over a patient's foot fungus and the seating arrangements for his daughter's wedding. When the 'Xerox technician' (Tobias's weak layman's cover) arrives late for his first meeting with the Peysers after Jerry's veal glaze has become a shellac, Steve takes the opportunity to keep a spy meet 'n' swap while treating the family to dinner at a prearranged restaurant. Jerry overhears (and misinterprets) Steve's assignment in a men's room stall with a beautiful Russian, beginning his unwitting apprenticeship in Steve's mission.

Douglas is full of zest and a humorous perky enthusiasm for piloting planes through treacherous landings and parachuting off building tops, but it's difficult not to compare his performance to the utter nuttiness of Peter Falk's in the 1979 original. Of course Falk had the advantage of a murkier introduction and a script full of far funnier situations, but Douglas cannot attain the endearing sense of frustration Falk did so effortlessly. More equal to Alan Alda is Brooks, who works his nebbishy quirks
while gradually turning around and playing into Steve's schemes (he gets the biggest laugh in the film masquerading as the 'Big Cobra' in a hot tub with a French arms dealer). The script's most original idea finds the twosome alone aboard Barbra Streisand's Gulfstream V. David Suchet (HBO's "Live from Baghdad") gamely tries to fill in for the original's villain, Richard Libertini, but the shoes are too big and he's tripped up with dated gay jokes.

The script really stumbles when it returns to family and personal affairs. Steve is teamed with a tasty protégé, Angela (Robin Tunney, "Cherish"), a ripe opportunity for a love interest that's badly fumbled (Tunney's quite good too, until she's dealt a bad hand). Maria Ricossa ("Harvard Man") has bright presence as Katherine Peyser, but Candice Bergin is left adrift with the 'hateful ex-wife' role and fails to exhibit much venom. As the about-to-be-weds, Ryan Reynolds ("Van Wilder") is earnest and Tori-Spelling lookalike Lindsay Sloane ("Bring It On") perky. Director Andrew Fleming's ("Dick") return to the wedding preparations are banal, except for Melissa's bachelorette party, where the FBI are mistaken for strippers. Emmy
Laybourne ("Superstar") is saddled with the film's most unnecessary and unpleasant character, bridesmaid Gloria, who gets drunk at every wedding event and admits to having slept with the groom.

"The In-Laws" has its moments, but looks pretty lame compared with it classier forebear.

Steve Tobias (Michael Douglas) is a devil-may-care CIA operative who spends his days fighting the bad guys, brokering arm deals and, lately, preparing for his son Mark's (Ryan Reynolds) wedding to Melissa (Lindsay Sloane), the daughter of Mild-mannered podiatrist Jerry Peyser (Albert Brooks). Never the best of fathers, Steve has vowed, this time, to put his son first but, as usual, duty calls and he enlists the reluctant help of Jerry in "The In-laws."

For some reason Hollywood has the absolute need to take a classic film - "Father of the Bride" or "Get Carter" for example - and remake it. Like sequels, remakes are almost never the equal the original and are usually a disappointment. This new remake of the venerable 1979 "The In-laws," which starred Peter Falk and Alan Arkin in an historic comedy pairing, would have been better served if it had kept one of its working titles, like "The Family," instead of so forthrightly naming it after its inspiration.

It's not that the new "The In-laws" is bad. It is actually an amiable little comedy that has a carefree, likable performance by Douglas and a suitably manic, helplessly outraged character in Dr. Jerry. Unfortunately, unlike the original, there is little going on at the supporting level. Where the '79 film had terrific secondary characters like flight attendant Bing Wong, played by veteran James Hong, and the absolutely outstanding comic performance by Richard Libertini as the velvet art-collecting dictator who talks to his hand - and it talks back! The remake lacks such sparkling performances although David Suchet fits the bill as the fey villainous arms dealer Jean-Pierre Thibodoux. Robin Tunney is not used well as Steve partner-in-training. The potential of a love interest between Tobias and Tunney's Angela is completely mishandled and wasted. There is also too much time spent on Jerry and Steve's kids. Ryan Reynolds and Lindsay Sloane reprise the cardboard characters of the original but are given too much screen time with little or nothing to do. Candice Bergen, as Tobias's estranged wife, is here, as far as I can tell, for those nostalgic for reruns of "Murphy Brown."

Techs are solid and some of the special F/X, like when Steve parachutes off the top of the John Hancock building in Chicago with Jerry tethered to him, look great. "The In-laws" is a by the numbers remake that will be playing to an entire generation or two that have never even heard of the original film, never mind having seen it and enjoyed the wackiness of Falk yelling to Arkin during an ambush, "Serpentine, Shel, serpentine!" I guess you had to be there. If you were, you'd know exactly what I mean, though Albert Brooks in a thong is nearly worth the price of admission.