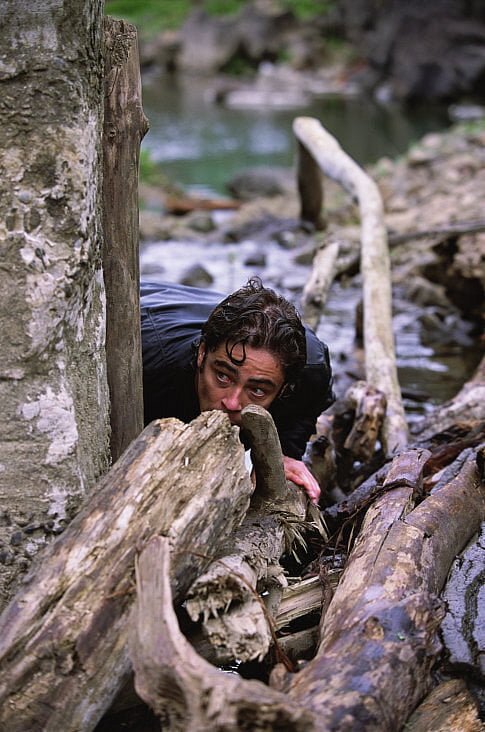 Special Operations Sergeant Aaron Hallam (Benicio del Toro, "Traffic") is awarded the Silver Star for his bravery in Kosovo, but the horror that enveloped him there haunts him and affects his judgement on a subsequent mission. After slaying four sweepers sent to capture the renegade assassin, FBI trainer L.T. Bonham (Tommy Lee Jones, "Men In Black II") is called in, his former pupil now "The Hunted."

Screenwriters David and Peter Griffiths ("Collateral Damage") and Art Monterastelli have created an original screenplay that in truth is a remake of "First Blood," the first of the "Rambo" series, with a little of Tommy Lee Jones's character from "The Fugitive" thrown in and some borrowing of "Apocalypse Now's" Colonel Kurtz for del Toro's motivation. Oscar winning actor Jones has led his audience to expect going through old motions, but for del Toro to take on this tired material immediately after winning his statuette is a major disappointment.

Heavily camouflaged Hallam creeps through the hell that is an Albanian village being obliterated by the Serbs. After witnessing the mass slaughter of innocents, he infiltrates the Mosque being used as command post and efficiently eviscerates the Serbian Sergeant in charge. L.T. is introduced freeing a white wolf from a trap near his remote wilderness home in snowy British Columbia. In verdant, mossy woods hundreds of miles south in Oregon, two 'hunters' with high-precision scope rifles, track Hallam, who leads them into traps of his own. L.T. is, reluctantly of course, called in to find the man he trained. Abbie Durrell (Connie Nielson, "One Hour Photo") is the otherwise competent Portland policewoman who's around to give L.T. more obstacles to overcome.

The two succeed in tracking down Hallam, who trained though he is leaves lots of sloppy signs behind and returns to the home of his last girlfriend (Leslie Stefanson, "The General's Daughter"), the first place anyone would look. In "The Fugitive" fashion, he escapes his FBI prison transport to lead L.T. throughout Portland and back into the woods where he sets a series of highly complex traps and forges a knife in what appears to be a couple of hours.

Compounding the silly lapses in logic is the filmmakers' waffling on Hallam's state of mind. When FBI agent Van Zandt (Ron Canada, "Lone Star") presents the evidence of Hallam's field failure, he rather believably counters with his version of events. In addition to the bookending white wolf mythology, L.T. is burdened with biblical references to Abraham sacrificing his son. A more interesting message about respecting the food chain beneath one sounds good but doesn't really make sense within the film's context.

One gets the sense that director William Friedkin ("Rules of Engagement") may have had a more lucid film that was edited into a stock actioner. The production itself cannot be faulted, with cinematographer Caleb Deschanel contrasting the moist mossiness of the Pacific Northwest, the cool grayness of Portland and the pure whites of Canadian winter. Intimate interiors closely contain characters more at east in the great outdoors. Images are nicely cut together by Augie Hess ("Rules of Engagement") particularly a segue from a waterfall into a snow shower. Fight choreography seems slowed down to allow us to see the moves that were taught in a flashback. An interesting move, where Hallam cuts himself in order to blind L.T. with blood, is the only unique element of the confrontations.

Tommy Lee Jones and Benicio del Toro must be given credit for the physical demands of their roles (del Toro broke his ankle during filming), but neither stretches their acting chops. Nielson is one of those women who can believably portray a cop without dulling down her beauty. Stefanson is cast adrift with no background to her character's short yet seemingly serious relationship to Hallam and oddly costumed (Gloria Gresham, "Bandits") like a buttoned-up schoolmarm. Canada injects too much villainy into his role.

Del Toro's next project is the anticipated "21 Grams" from "Amores Perros" director Alejandro González Iñárritu, which gives hope that "The Hunted" is but a blip on the radar and not the beginning of an Oscar-cursed career downslide.

Special Ops Sergeant Aaron Hallam (Benicio Del Toro) has been to hell and back. His last assignment in Kosovo thrust the horror of "ethnic cleansing" in his face and he disappeared not long after. Now, several years later, a number of hunters in the Pacific Northwest have met with untimely ends, gutted and trussed like game meat. The FBI is on the case searching for prime suspect Hallam, but L.T. Bonham (Tommy Lee Jones), Aaron's trainer in the deadly arts, is called in to help find "The Hunted."

A voiceover announces, "Abraham, slay me a son" as God instructs his prophet to murder his own flesh and blood. The film switches to an eerie nighttime setting in Kosovo as the shadowy team of American Special Ops soldiers invisibly work their way through a burning city as Serbian forces gun down innocent men, women and children without so much as a blink of an eye. The horror is too much for Sgt. Hallam and he soon disappears after being awarded the Silver Star for his clandestine involvement in central Europe.

L.T. Bonham runs through the snowy woods in pursuit of a bleeding and limping white wolf. He catches his prey and gently removes an illegal snare from around the poor creatures bloody leg. Next, we are transported to a rainy forest in the Pacific Northwest as two "hunters" sporting rifles with powerful, unconventional high tech scopes track down their quarry. Although heavily armed, the two men are dispatched by a camouflaged figure with a knife. The FBI are already on the scene when Bonham arrives and he has them stand down while he heads into the forest, alone, to find Aaron Hallam.

The ex-Special Ops soldier is taken into custody for the string of murders of the hunters (who may have been CIA operatives), but Bonham trained his ward too well and Hallam escapes into the city of Portland, Oregon. The forces of the FBI, state and local police are called into the manhunt but it is up to Bonham to bring in his boy.

As "The Hunted" begins to unfold, I was struck with the thought that I've seen this before. What comes to mind is the 1982 Sylvester Stallone thriller "First Blood" - the tale of a troubled Vietnam vet who, in a battle of wills with a bastard of a town sheriff in the Pacific Northwest, starts a one man war with society. Before the body count starts to build, there arrives Col. Samuel Traughtman (Richard Crenna), the man who trained Rambo and who must bring his wayward student in from the cold. That, in a nutshell, is what "The Hunted" is like, with the focus on Bonham instead of renegade Hallam, except this William Friedkin film is not nearly as good as the first Rambo film.

With "The Hunted" we have trouble vet Aaron Hallam hiding out in the woods of the Pacific Northwest in a one-man war against government hunters sent to kill him, then the FBI and, finally, with Bonham. The opening voiceover, though, sets the stage, making the ending more predictable and less meaningful than "First Blood." Helmer Friedkin moves his new actioner along at a brisk pace but the original screenplay, by David & Peter Griffiths and Art Monterastelli, is a shallow rendition of a better story.

The story for "The Hunted" is reportedly based upon the experiences of the film's technical consultant, Thomas Brown, who runs a tracker school like the one depicted in flashback. This may be true but the more than passing resemblance to "First Blood" cannot be overlooked. It feels like the writers played the '82 film in a loop until they were inspired to create "The Hunted" screenplay. There are also elements of the extended cat and mouse chase between Bonham and Hallam that ring extraordinarily untrue. Knives are an important element of the action, but when Aaron forges a blade with some kindling and a couple pieces of iron and L.T. chips a knife out of stone (in what feels like only minutes of film time) it strains credulity. Even worse is a trap that Hallam springs on Bonham, at one point during the chase, which would have taken four guys all day to set up. Aaron, apparently, is able to whip it up in a few moments.

The acting is pretty perfunctory but TLJ does his best to avoid the cliché of this US marshal role in "The Fugitive" film duo and plays L.T. Bohnam as a man that has turned his back on the trade that made troubled Aaron into the killing machine he must ultimately confront. L.T. is a man who lives to be out of doors and is uncomfortable being inside normal buildings. I also have to give 55-year old Jones credit for the sheer physical effort playing Aaron's learned master and final opponent. Benicio Del Toro is not given nearly enough on screen time and when he is on camera he doesn't have a lot to do to build his character. Early on he is shown, in a scene that smacks of the insanity of Col. Kurtz in "Apocalypse Now," in a mixture of shadow and light that is to explain why he wigged out and ran away. After that, the Oscar-winning actor is pretty two-dimensional.

Third billed Connie Nielsen, as chief FBI investigator Abby Durrell, is relegated to the background with the rest of the nondescript supporting cast. She should have had been given more to do, a la Brian Dennehy in "First Blood," but is left completely out of the film's central action. Leslie Stefanson, as a quasi-romantic interest for Hallam, is part of a tacked on sub-plot that adds to the film time but the interlude is nothing more than an unnecessary distraction. The rest of the cast is fodder for Aaron's knife - a considerable character in its own right.

Techs are in the very good range and are far better than the script deserves. Of course, with the great Caleb Deschanel behind the camera we can expect that the lensing will be of outstanding quality - and it certainly is here. The lush landscape of the rain forests is handled with a crispness and clarity that almost hurts the eyes. This is balanced nicely with the fast action of the city scenes as L.T. chases Aaron through Portland and into the river basin for the finale.

There was probably a good movie left on the cutting room floor of "The Hunted" and I wish I could see it.