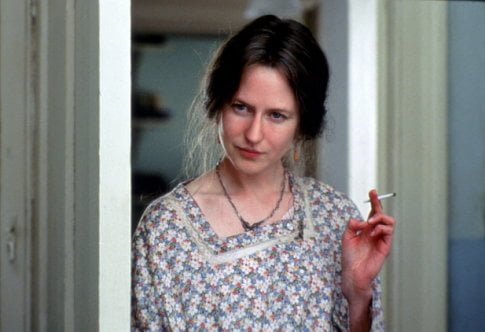 In 1923 away from the bustle of her beloved London, Virginia Woolf (Nicole Kidman) begins to write the book that will become "Mrs. Dalloway." It's heroine, Clarissa, is a fiftyish London socialite consumed with giving a party while contemplating that a passionate kiss she gave a girlfriend in her youth may have been the most significant moment of her life. In 1951 Southern California, Laura Brown (Julianne Moore) hides depression from her doting husband (John C. Reilly, "Gangs of New York") as she awaits the birth of her second child and reads Woolf's novel. In the present, Clarissa (Meryl Streep) frets over a party she will give her ex-lover Richard (Ed Harris) who is dying of AIDS. An entire life lived in one day for three women, how significant "The Hours."

Director Stephen Daldry ("Billy Elliot") begins his film in 1941 as Virginia Woolf drowns herself with stones in her coat pockets in the river Ouse. Seamus McGarvey's ("High Fidelity") camera slides beneath the water among the river reeds, recalling the swimming scene opening of "Iris," another film about the demise of a British author. Unlike that film, "The Hours" explores the writer's creative process while showing her work's impact on a reader decades later and also reinventing her story in the present day. While each element doesn't provide the same emotional impact, this cinematic hat trick is ambitious, creative and thought provoking.

Editor Peter Boyle connects the three stories by cutting among small events that happen in each. Three 'husbands' come home (in Clarissa's case, her female partner Sally (Allison Janney, TV's "The West Wing")), breakfasts are fretted over, a vase of flowers is placed, a line ('Clarissa decided to buy the flowers herself') is written, read and spoken. The ingenious construction (adapted by David Hare from Michael Cunningham's novel) constantly flows forwards and back, weaving themes among three strands which allow us to view events as if through a prism.

Woolf's husband (Stephen Dillane, "Welcome to Sarajevo") and sister (Miranda Richardson, "Sleepy Hollow") fret over her mental health as Clarissa cares for Richard and Laura contemplates suicide. Woolf writes about a same sex kiss which Laura bestows on Kitty (Toni Collette, "About a Boy") while Clarissa openly lives a lesbian lifestyle. Clarissa's party is reflected more quietly in Virginia's tea with her sister and Laura's cake baking for husband Dan's birthday. Suicide touches all three stories, as does motherhood which also connects the 1950s and present day. The film can be criticized for its air of incessant doom, yet it strives to present an affirmation of life lived well.

Laura's middle story is the most self contained. Virginia's is the strongest, yet it is muddled in its conclusion. Just as Virginia wins her argument with husband Leonard to return to London, she's presented as killing herself yet what we are not informed of is that in the sixteen intervening years they did indeed return to the city. Clarissa's story is confused by lack of background - the love of her life is a man who left her for another man (Jeff Daniel) while she now lives with a woman.

Nicole Kidman, unrecognizable beneath a proboscis prosthetic, gives a weighty performance as Woolf that illuminates yet further range for the actress. She has a gravity as she considers her words while furiously chain smoking that projects creation. Moore's Laura is a less optimistic variation on her "Far From Heaven" housewife while Streep's thesping is mostly limited to a breakdown scene. Strong support is offered by Dillane, who fleshes Leonard out complexly, and young Jack Rovello as Laura's perceptive little boy Richie. Toni Collette, all glammed up in 1950's lacquer, is impressive in a small scene as the vivacious Kitty, who may or may not discern the meaning behind Laura's affection. Ed Harris pulls off a shocker of a scene.

Daldry makes an impressive leap from "Billy Elliot" to this intellectual material which is richly realized across time and half the globe. Suicides are connected by water imagery and descents and books are always evident. Production designer Maria Djurkovic and costume designer Ann Roth do exemplary work recreating the differing periods and locales in ways that help define the three different women. Philip Glass' score, however, is grating, an out of place element in a beautiful production.

With "The Hours" Daldry and screenwriter Hare have not only cinematically adapted a work of literature, but turned it upside down and inside out. It's a unique achievement.

Author Virginia Woolf (Nicole Kidman) is an extremely troubled woman as she puts pen to paper in 1923 to create her classic novel, Mrs. Dalloway, the story of a day in the life of a London socialite who lives to throw her parties but is, in her heart, unhappy.

Laura Brown (Julianne Moore) is a housewife in 1951 southern California suburbia. She is an avid reader and is currently plowing through Mrs. Dalloway. She, like the author and her character, Clarissa Dalloway, is also a troubled soul, not happy in her marriage to Dan (John C. Reilly), and her young son Richie (Jack Rovello) senses it.

Clarissa Vaughn (Meryl Streep) is a book editor in 2001 San Francisco whose day will be spent planning a party for her favorite client, Richard Brown (Ed Harris), a heralded poet who is losing his bout with AIDS. There is a past between these two and Clarissa is as troubled as her namesake from Woolf book.

The Hours belongs to the actors with Kidman, almost not recognized made up as Virginia Woolf, getting the lion share of praise of the three female leads. Her manners and gestures evoke the period and she gives a stylized perf, both physically and emotionally. Woolf, though extraordinarily talented, has demons within that make her verge on suicide and other escapes. Her husband Leonard (Stephen Dillane) moved them to a country home to try to ease her mental pressures and she begins to write her novel. The book and its forlorn main character carry forth into the other two ladiesstories.

Julianne Moore gives a subtle, quietly tense perf as the despondent housewife, Laura Brown, who wants out of her marriage and motherhood and contemplates getting out by drastic means. On this one day, Dan birthday, her tensions over her desperation reach a peak. She knows she should think different about her life but her feelings for self-preservation win out over her duty to Dan. Moore proves herself one fine actor and puts a very different spin and character from her other 50suburban housewife perf in Far From Heaven.

Streep has the slightest of the three roles as she brings to new millennium life Mrs. Dalloway. On this day she is planning a dinner party to celebrate a poetry award for friend, client and long ago lover Richard. She is concerned with party prep, flower purchases and who will attend, but her day is about to take a terrible turn. Where Kidman and Moore are mostly the center of attention in their respective stories, Streep must share the stage with several other prominent characters, one of who gives a powerhouse performance.

Ed Harris is, simply, terrific in his physically challenging role as the dying Richard. He looks like a man ravaged by AIDS and is enthralling as a man who has lost his battle. Toni Colette, probably one of the most under appreciated actors in the business, gives a heart-rending performance as Laura friend, the childless Kitty, who confides that she has to go into the hospital for a couple of days. She textures her performance as much with her unsaid words as she does with the spoken. Allison Janney, as Sally Lester, Clarissa live-in lover, is briefly but nicely utilized. Jeff Daniels is used effectively in the small role as Richard lover.

Techs are very good all around, especially considering the daunting task of having to give each period its own unique look while keeping a common thread between them all. Camera, by Seamus McGarvey, gives each period its own feel, as does production and costume design, by Maria Djurkovic and Ann Roth, respectively.

Helmer Stephen Daldry does a deft job at weaving the common thread through the three lives of the principals, working with David Hare well-scripted adaptation of Michael Cunningham complex novel.

With the prospect of films like Kangaroo Jack about to burst across America winter movie screens it a pleasure to have a film like The Hours as an alternative.