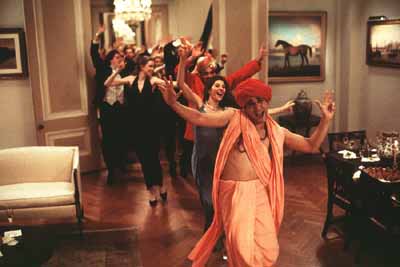 'It's called the American Dream because it only happens when you sleep,' Ramu's illegal immigrant roommate Amit (Raahul Singh) informs him, but dual chance encounters prove that who you know can bring success if you're willing to betray a trust. Based on experiences by producer Shekhar Kapur (director of "Elizabeth"), "The Guru" is a gentle comedy of colliding cultures.

Movie star handsome Ramu is first shown as a child squirming out of his seat at a typical Bollywood production to groove to the movie "Grease" playing in the adjoining theater. Years later his hopes are dashed when Vijay's red Mercedes and New York City penthouse turn out to be a taxicab and bachelor crash walkup. An audition with Ramrod Productions head (Michael McKean, "Best in Show") has Ramu telling his buddies he's about to be a star, but when he's called upon to perform with Sharonna (Heather Graham) the next day in a cheesy sex skit he can't get up the proper enthusiasm in front of the crew.

Sharonna, who hides her profession from firefighter fiance Rusty (Dash Mihok, "The Thin Red Line"), takes pity on Ramu and coaches him in the art of acting in porno for the $800 price tag of her ideal wedding cake. Tidbits such as sexual release freeing us from our fears and nudity being a costume to perform in are remembered by Ramu when socialite Lexi (Marisa Tomei, "What Women Want") begins to promote him as the Deepak Chopra of sex. Ironically, Ramu must hide his new profession from Sharonna, whom he is falling hard for, but his fame cannot be hidden forever and Ramu must choose between dream and reality.

Director Daisy von Scherler Mayer ("Madeline") neatly hops between New York's strata of societies and the musical styles of Hollywood and Bombay. (A typical Bollywood musical production is delightfully segued into a cover of "Grease" number "You're the One That I Want.") Tracey Jackson's screenplay isn't side-splittingly funny, but von Scherler Mayer delivers a film that should have you exiting with a smile on your face.

Ramu Gupta (Jimi Mistry) is a popular Indian dance teacher in Delhi. His friend, Vijay (Emil Marwa), emigrated to America and writes to his friend about his success - he drives a Mercedes, owns a penthouse apartment and has loads of money. With the promise of such good fortune, Ramu leaves the security of his home and family and heads to New York City. He soon finds, however, that the American Dream, in reality, may only happen when you are asleep in "The Guru."

The film starts off with a movie within a movie as young Ramu sits with his mother in a dark theater as a Bollywood extravaganza of song and dance unwinds on the screen. He sneaks into another theater to watch one of his favorite films, "Grease." From the start you can see that the boy has stars in his eyes and the urge to be a Hollywood phenomenon. Now, as a well-liked dance teacher with all the right moves, he sees himself as prime movie idol material and flies to America to make his fame and fortune. When Vijay reveals that his stories about his life in the Big Apple are patently false, Ramu must face reality and try to eke out a living in conventional ways like driving a cab or waiting tables.

When Ramu loses the one job he can land, as a waiter in an Indian restaurant, he despairingly tags along with Vijay on a catering assignment for the birthday party of a rich, ditzy socialite, Lexi (Marisa Tomei), who is searching for enlightenment from the East. Her Swami Bu (Ajay Mehta), though, has sought his own enlightenment - in a bottle - and is incapable of even putting two words together. Desperate, the caterer, Ramu's former boss at the restaurant, asks Ramu to fill in and the Guru of Sex is born.

In typical old Hollywood/new Bollywood fashion, Ramu is thrust into societal success and becomes the guru of choice by the socialite class of New York City. He uses the homilies of life and sex that he learned from Sharrona to become quite the success, especially with Lexi. But, his rise to the fame he so wanted back in India has a price as he falls for Sharrona. Hard.

This is a quite cute little piece of fluff by helmer Daisy Von Scherler Mayer that does a surprisingly good job of recreating that film staple of India, the Bollywood movie. I have only had a little experience with this particular ethnic art form, but what I have seen are stories of strife and love and drama interspersed with large-scale song and dance numbers, hugely choreographed and colorfully costumed. The director, working with scripter Tracey Jackson's original screenplay, Americanizes the Indian staple with humor, fun and creations of the song and dances numbers that have their own charm in their imitation.

Jimi Mistry, British born and raised, infuses a genuine charisma into his role as Ramu, providing the bewildered persona that accepts his unexpected good fortune but always expects a hitch, especially when he falls in love with Sharrona. He is, after all, jaded by his first hand experience with the American Dream even as it starts to happen to him. Heather Graham is, surprisingly, likable, even lovable, as the porno starlet who sees her sexy career as means to an end. She keeps the reality of her "day job" from her fiancé, pretending, instead, to be a substitute schoolteacher. She, too, falls for Ramu as she tries to teach him her philosophy about sex. Graham comes across as a wholesome young lady despite her chosen career.

Academy Award winner Marisa Tomei gets left in the dust by her costars with her one-note, spoiled (but nice) rich girl who learns that enlightenment of the spirit can also come from within. The supporting cast helps to flesh things out with Michael McKean giving an amusing performance as a porno filmmaker with a heart (this is, after all, a Hollywood movie). Christine Baranski, as Lexi's mother Chantral, looks emaciated but it fits her wealthy socialite persona. Emil Marwa plays the sidekick to the sex swami, Vijay, with an amusing note as he takes full advantage of his friend's newfound prosperity.

The production is straightforward with loving attention spent on the several dance numbers that have just the right tone as the stars break into the obviously dubbed songs that are the signature of Bollywood. They aren't huge in scale but have enough players participating to give the well-choreographed dances a scope bigger than you would guess. The production design, by Robin Standefer and Stephen Alesch, and costume, by Michael Clancy, complement the numbers briskly lensed by John De Borman.

"The Guru" is a light and frothy concoction that is a tasty little treat with its heart in the right place.