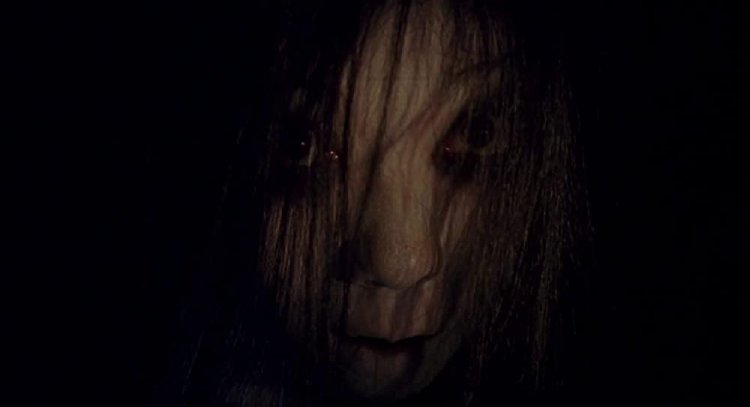 Karen (Sarah Michelle Gellar, TV's "Buffy, the Vampire Slayer") is an American exchange student in Tokyo who is about to learn that ghosts born out of death suffered in the grip of a powerful rage or sorrow leave death for those who come upon the place of their murder. when Yoko fails to show up for her job at the Care Center, Karen substitutes for the social worker and finds horror in a private home. Writer/director Takashi Shimizu reinterprets his "Ju-On" for an American audience by laying out his puzzle pieces in more linear fashion to tell the tale of "The Grudge."

Sarah Michelle Gellar brings little to the party, but Shimizu's remake of his own film has all the creepy scares of his original minus the confusion of his overlapping timelines. "The Grudge" remake is more successful a reinterpretation than "The Ring."

Before the opening title credits are over, we've witnessed two deaths. Bill Pullman, reusing his catatonic confusion from "Igby Goes Down," makes a sudden exit in front of his horrified wife. Yoko (Yoko Maki, "Battle Royale 2") tends to an American suffering from encroaching senility (Grace Zabriskie, "Twin Peaks"), but a strange noise upstairs draws her to crawl into a cabinet to investigate. She never comes out. Karen is sent to the same house and finds a very distraught Emma in a trash-strewn home. Emma does not speak, even when Karen is also drawn upstairs by a strange noise. She finds a cabinet all taped up, but the sound of a animal in anguish gives her the courage to open it - inside is a cat, held by Toshio (Yuya Ozeki of the original "Ju-On"), an odd little boy who will not come out. Karen calls Alex (Ted Raimi, producer Sam's brother, "Spider-Man 2") for assistance, finds a crumpled family photo with the little boy, his mother's face cut out, then checks on Emma who is very agitated. 'I just want her to leave me alone,' Emma finally speaks and Karen comes face to face with Kayako (Takako Fuji, "Ju-On"), the ghost with a grudge.

Shimizu blurs the lines from his original's chaptered approach and drops a couple of characters, keeping the action centered on Emma's family (two flashbacks explain why Emma is now alone in the house), Karen and her boyfriend Doug (Jason Behr, "The Shipping News") and Japanese Detective Nakagawa (Ryo Ishibashi, "The Crossing Guard"). Adapting screenwriter Stephen Susco and Shimizu come up with a nice twist to connect Pullman's professor to Kayako, but their treatment of Emma's son and his wife (William Mapother, "In the Bedroom" and Clea Duvall, "21 Grams") is less effective than the original film's. Emma's daughter (KaDee Strickland, "The Stepford Wives") gets creepier treatment.

Shimizu hasn't entirely worked out the kinks in his work - some scenes are mere setups for a shocking visual and aren't smoothly integrated into the whole. Mostly, though, the film has been refined, with better special effects and multiple layers of haunting. Maintaining the Japanese location works in the film's favor, the disorientation of a stranger in a strange land intensified by, well, additional strangeness.

"The Grudge" marks Shimizu's fifth reworking of his original idea. He's obviously got a knack for original horror. With American discovery of his talents, hopefully he'll explore some new ways to scare us.