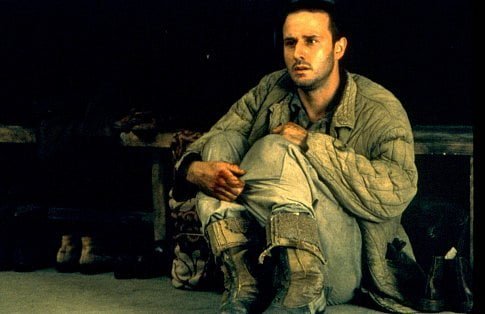 During the Nazi extermination of Europe's Jews during World War Two the task of leading the victims to their death and disposal of their remains was thrust upon the Jews themselves in the form of special squads called Sonderkommandos - men forced to do the Nazi dirty work in exchange for extra food a few more short months to live. In the notorious death camp of Auschwitz, 13 such Sonderkommando groups struggled to stay alive. Group 12, though, planned to fight back and bring the horror to a halt, even if just for a little while, in "The Grey Zone."

The Nazis devised a horrific way of getting their dirty work done - in exchange for privileges which included a four month stay of execution, Jewish prisoners could volunteer for Sonderkommando units, responsible for herding Jews to their deaths and dealing with the aftermath. Covered with the ashes of the dead as they worked, these men fell into a moral quagmire, "The Grey Zone."

Writer/director Tim Blake Nelson ("Eye of God," "O") attempts to shed light on the excruciating dilemma faced by the Sonderkommando, targeting the only Auschwitz unit, the twelfth of thirteen, which organized an armed revolt. While Nelson recreates the horrifying world of the Auschwitz showers and crematoria, he fails to attain the emotional involvement crucial to this type of drama.

Tim Blake Nelson adapted his film screenplay from his own play - no surprise as his film suffers from staginess. Worse, he's directed his actors to deliver their lines in hushed monotone. One could suppose that his intent was to make the actors appear deadened to their circumstance, but the gambit doesn't work, instead alienating the audience. He only really gets the horror of the situation through in three scenes. David Arquette's Hoffman listens slumped in a corner to the screams of the people he's just locked into the shower room. An old man discovers the origins of madness as he shovels the naked bodies of his wife, daughter and two grandchildren into roaring flames. A woman (Mira Sorvino) witnessing the shooting of fellow inmates because she won't divulge information to the Nazis throws herself onto an electrified fence. While Nelson doesn't stint from showing dead Jewish bodies in piles, he's arranged them too artfully, protecting the actors' dignity but losing visceral impact.

"Auschwitz: a Doctor's Eyewitness Account," the memoirs of Miklos Nyiszli, a Hungarian Jewish doctor who assisted Mengele with his nightmarish medical experiments, was a guide for Nelson, and he's most successful showing the relationship between Nyiszli (Alan Corduner, "Me Without You") and Oberschaarfher Muhsfeldt (Harvey Keitel). While Nyiszli and the Sonderkommando cling to the idea that they aren't personally killing anyone, Muhsfeldt parallels his own situation with theirs, certainly an interesting concept.

Less inspired is the story of a young Hungarian girl who survives the gas is clung to by the Sonderkommando as a cause for salvation. It's evident that they have no chance of hiding the girl and her symbolism strains the storyline.

With "The Grey Zone," Tim Blake Nelson takes a charged, unimaginable situation and stylistically flattens it.

Tim Blake Nelson, credited as producer / screenwriter / play author / editor / director for "The Grey Zone" has taken a huge bite of a grim story of insurrection and destruction, leavened with spiritual salvation, and makes it, overall, boring and tedious. Based on his own play, Nelson spends reels of film having his concentration camp characters constantly (and quietly) discuss their plans to rise up against their Nazi oppressors and destroy the ovens they have been forced to feed with the victims of the notorious gas chambers.

There are some elements to "The Grey Zone" that briefly captivate the viewer - nighttime shots of the death oven chimneys belching flames and smoke from the burning bodies; the gut-clenching scene of the unsuspecting Jews being led to the "showers" with the assurance of the Sonderkommandos that all will be well; the gruesome symmetry as the insurrectionists are forced to lie face down as their captors execute them one by one. But, these and other brief scenes and statements against brutality are overwhelmed by the talk, talk, talk that makes up the bulk of the film.

As the members of Group 12 prepare to gather their weapons and explosives to rise up against their oppressors a fluke occurs that will jeopardize their plans. One of the inmates, Hoffman (David Arquette), discovers that one of the victims of the latest gassing, a 14-year old girl, is inexplicably alive. Prisoner doctor Nyiszli (Alan Corduner) is called in to help and he revives the silent teen. Suddenly, this symbol of life becomes more important than any plans of revenge and destruction of the hated ovens but will cost all of the members of Sonderkommando 12 everything.

Nelson based his play on the real-life book by Miklos Nyiszli, Auschwitz: A Doctor's Eyewitness Account, then adapted the stage version to the screen. The film suffers from the conversion. Theater audiences are used to long, wordy dialogs to push the story forward. Film, on the other hand, is a visceral medium that requires more than words. This is why for moviegoers and theater fans, never the twain shall meet. Don't get me wrong, there are many plays that have been effectively adapted to the screen like "12 Angry Men" and "Glengarry Glen Ross." But these adaptations absolutely dripped with captivating conversation, something that "The Grey Zone" lacks.

The actors do their best with the material at hand but are strapped by too quiet, too talkie dialog that you have to strain to hear. Nelson has not impressed me with his director skills and elicits nothing more than two-dimensional performances from his talented cast, which includes Arquette, Daniel Benzali, Steve Buscemi, Alan Corduner, Harvey Keitel, Natasha Lyonne and Mira Sorvino. Lyonne and Sorvino get the meatiest parts, though theirs is a sidebar story, as women singled out by the Nazis to inform on the Sonderkommando plot. The male leads mutter through their roles (a directing, not an acting, problem).

Techs are solid if not involving. Lensing by Russell Lee Fine tries to breath some cinematic life into the proceeds but is stuck with the plethora of quiet two shots between the various players.

I expect a Holocaust film to wrench my gut, not bore me. This is the problem I had with "The Grey Zone."