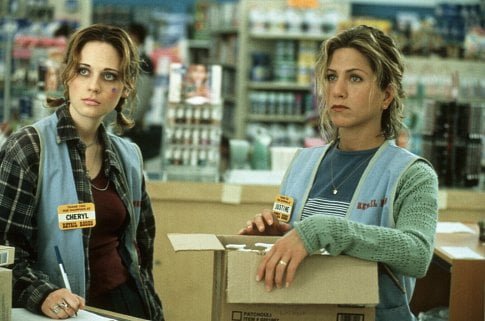 Justine (Jennifer Aniston) is bored with her 7 year marriage to pothead housepainter Phil (John C. Reilly, "The Perfect Storm") and her numbing job behind the cosmetics counter at the Retail Rodeo in a small Texas town. When she spies the soulful eyes of new cashier Holden Worther (Jake Gyllenhaal, "Lovely & Amazing"), she'll begin to wander down a path that will make her feel like anything but "The Good Girl."

Writer/costar Mike White reteams with his "Chuck & Buck" director Miguel Arteta ("Star Maps") for another of his uniquely comic/sinister explorations of the human psyche. While "The Good Girl" travels an expected route, it takes a few jarringly unexpected side trips along the way.

Justine convinces herself she's striking up a friendship with the interesting, 8 year younger, troubled Holden based on their shared hatred of the world, but clearly there's an attraction - one that blinds her to the obvious trouble this man-child will bring. Holden's passion offers her the excitement that's missing from her life and Justine spirals into a vortex of lies, dishonor, blackmail and tragedy before she finds a kind of salvation.

White's clever screenplay is surprisingly funny and packed with innuendo. His heroine's name recalls de Sade's 'Justine, or The Misfortunes of Virtue' while her husband's, Phil Last, begs to have her final 'ine' added. He places us in Justine's point of view (Aniston's philosophical narration is well utilized), yet breaks through it with supporting characters' observations. Justine thinks no one knows about her affair, yet when she offers Holden, presumably having sprained his ankle, a ride home, coworker Gwen (Deborah Rush, "You've Got Mail") advises 'You should put some cold water on it so it doesn't swell up and inflame.'

Holden's immaturity is underlined by his choice of meeting place (the Chuck E. Cheese). The Retail Rodeo's Cheryl (Zooey Deschanel, "Almost Famous") deadpans hilarious product 'endorsements' over the store loudspeaker, while store manager Jack Field (John Carroll Lynch, "Fargo") uses it to memorialize employees with tastelessly appropriate song selections. Phil and his best friend Bubba (Tim Blake Nelson, "O Brother, Where Art Thou?") imagine wacky paint inventions from within a haze of marijuana smoke that will transport their lifestyle. Everyone is looking to escape and only White's Corny, the Retail Rodeo's security guard, offers an outlet through his bible study class.

Arteta directs one of the best ensemble casts of the year, with Anniston's natural delivery grounding the film. Gyllenhaal walks a fine line, keeping his pathetic, desperate loser from becoming unsympathetic. Reliable Reilly is perfectly cast as the decent guy who loves his wife and questions little. Blake Nelson draws a complex portrait of Bubba, a goofy lowlife whose gradually revealed motivations render him a creepy obsessive. Deschanel, Rush, Lynch and White all work to define the absurdity of the Retail Rodeo workplace. John Doe ("Brokedown Palace") and Roxanne Hart's ("Once Around") almost dialogue-free representations of Holden/Tom's parents provide background for his character.

"The Good Girl's" finale finds Justine, now living with the results of her transgressions, more content with the status quo. The filmmakers have taken us on a perverse odyssey to conclude that misery loves company.

"The world is a giant candy store when you're young" laments 30-year old Justine Last (Jennifer Aniston), married for seven years to her pot-smoking, ambitionless house painter husband Phil (John C. Reilly). She works at the cosmetics counter at the Retail Rodeo in the middle of Nowhere, Texas and she envisions her life being a long, drab existence. Until she meets 22-year old Holden (Jake Gyllenhaal), a brooding, overly serious Catcher in the Rye wannabe who sparks a ray of hope for Justine in "The Good Girl"

Director Miguel Arteta and screenwriter Mike White hit a second one out of the park, following their quirky and compelling "Chuck & Buck," in this tale of frustration and desperation of a woman in need of more than life has dealt her. Glamour girl Aniston takes it to the wall as Justine, who sees no end to her mundane life which consists of boring days at the Rodeo and evenings parked in front of the TV with Phil and his ever present partner and crony, Bubba (Tim Blake Nelson), as they drink and smoke themselves into oblivion. Then, one day, she notices a new face at the checkout counter and introduces herself to Holden. The younger man has a troubled, mysterious quality that attracts her, intellectually and sexually - especially sexually. A passionate affair ensues but, instead of finding bliss, Justine finds herself caught in a web of adultery, deceit, larceny and blackmail.

Mike White creates a wonderful set of characters to populate his little morality play and these characters are given life by the capable ensemble cast. Aniston, as the title character, is ostensibly the star of the film but she is really a first among equals with the rest of the cast. The actress does a solid job in making Justine a 3-D character and injects emotion and energy into the despondent haus frau. Jake Gyllenhaal once again shows himself to be an engaging and talented young actor who continues to exhibit his range. With a body of work that includes "October Sky," "Donnie Darko," "Lovely & Amazing" and "Bubble Boy," he once again creates a unique character as Holden (or Tom, as his parents call him but "that's my slave name" he tells Justine). Even is she doesn't figure it out 'til too late, we know early on there is something seriously wrong with the boy.

John C. Reilly does a splendid job as the clueless Phil who doesn't see the handwriting on the wall. He has his own share of frustrations, which he masks with pot and zoning out in front of the boob tube. He tries his best but it is never enough to change the course of their lives. Tim Blake Nelson is nothing but outstanding as best friend Bubba, a man who we come to learn, is anything but a "bubba." Writer White appears as security guard Corny, a bible-thumping, self-righteous Christian zealot whose damnation of Justine comes back to bite him. John Carroll Lynch as Jack Field, Your Store Manager, has a small role as the Retail Rodeo boss but conveys honestly, kindness and caring in a convincing, realistic way. Zooey Deschanel as Justine's cosmetic counter coworker Cheryl is the subversive of the store, always doing her best to shock the shoppers, whether over the loud speaker with her editorialized what's-on-sale announcements or with her clients at the counter. Deborah Rush rounds out the cast as the long-timer at the rodeo that meets an untimely end, an end that will gravely impact Justine on her road to perdition.

The look of the film belies what must be a small budget, by Hollywood standards, as the filmmakers strive to create the look and feel of a town in the middle of nowhere, a wasteland that is both metaphor and, for the denizens of the town, reality. Cinematographer Enrique Chediak gives the film a washed out, grainy look that befits the locale - kudos, too, for making southern California look like rural Texas. Production design, by Daniel Bradford, complements the camera with the air-conditioned prison of the Retail Rodeo and the blue-collar house that Justine and Phil occupy. Costume designer Nancy Steiner gives just the right touch to her dressing, making the player look like they, too, shop at the Rodeo.

Mike White's deft combination of serious subject matter and dark, funny humor make ""The Good Girl" a film worth watching. The steady hand of helmer Arteta, his behind the camera crew and the talented cast make this a little gem.