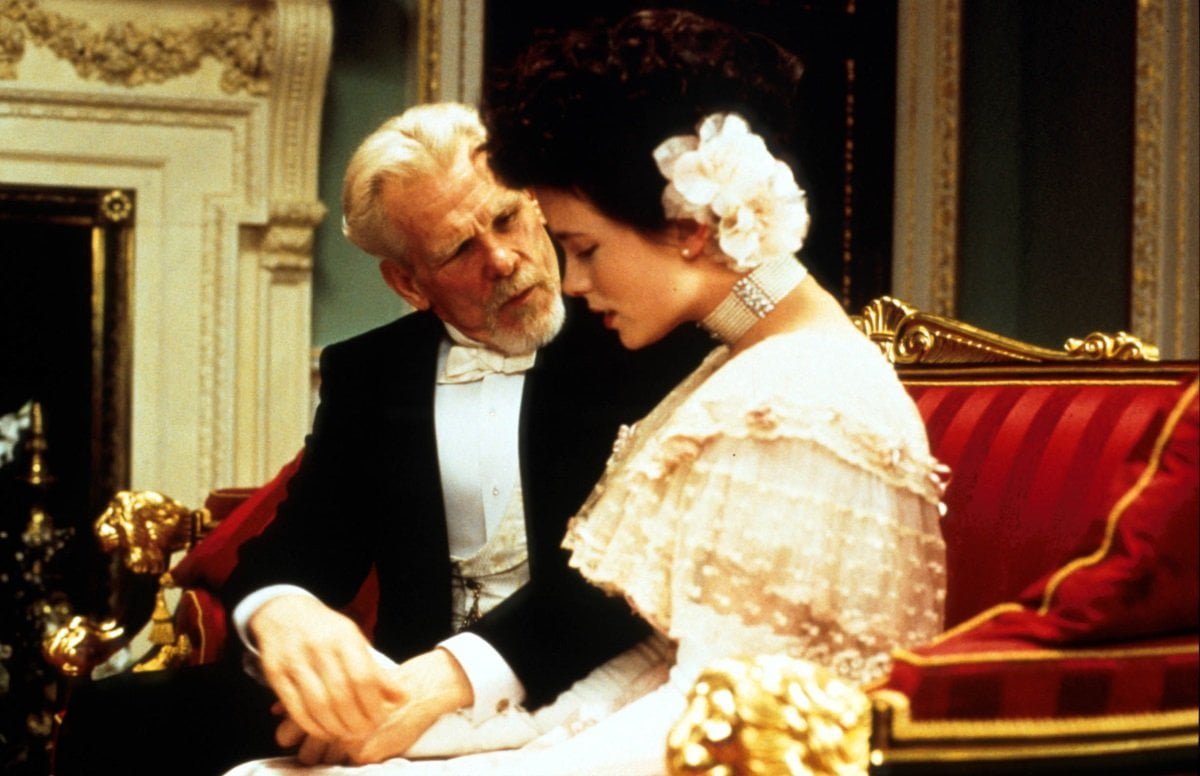 American Charlotte Stant (Uma Thurman) is in love with Italian Prince Amerigo (Jeremy Northam, "An Ideal Husband"), but she doesn't have the money he needs to restore his beloved family Palazzo. With the help of Fanny Assingham (Anjelica Huston) he becomes betrothed to Maggie (Kate Beckinsale, "The Last Days of Disco"), a school chum of Charlotte's and daughter of America's first billionaire Adam Verver (Nick Nolte). Fanny advises Charlotte that her relationship with Amerigo will be kept a secret, but in order to remain close to Amerigo, Charlotte marries Maggie's widowed father and begins a complex game of lies and deceit in the latest Merchant Ivory adaptation of a Henry James novel, "The Golden Bowl."

The titular golden bowl is a gold encrusted piece of crystal presented to Charlotte as a possible wedding gift by an antiques merchant. Amerigo, who has accompanied her, advises outside the shop that the crystal is cracked. While Amerigo appears to be content with his lovely, innocent young wife, Charlotte will not let him go and Maggie's devotion to her father allow the foursome to pair up according to Charlotte's desires. Charlotte's passion for Amerigo makes her deaf to gossip, but her husband is not as blind as she might think. His veiled warnings to her go unheeded, but Amerigo is quick to pick up on his father-in-law's doublespeak.

This lusty, modern adaptation by Ruth Prawer Jhabvala gives the art house crowd a period soap opera to relish. James' story casts Charlotte the villain of the piece on a surface level, but some consideration makes one begin to doubt - hasn't Amerigo betrayed everyone, and for money no less, while Charlotte is motivated by love?

Uma Thurman forgoes her usual pallid, somnambular style and sinks her teeth into her meatiest role since "Pulp Fiction." If she seems overtly modern and out of control, those are qualities that make Charlotte such a hair trigger, allowing the film to build up to a squirmy level of tension. Nick Nolte, who had the misfortune being cast in the lead of Merchant Ivory's least successful film "Jefferson in Paris," rises to the occasion here. Adam seems the stereotypical, open, easy-going, buried-in-work American, but Nolte allows the shrewdness to wink out at us even as his costars accept his oblivious good nature. Beckinsale is terrifically appealing as the naive Maggie. The sweetness she brings to the role emphasizes the underhandedness she's dealt. The English Northam is believable as an Italian aristocrat, but he's a bit too opaque, not enough an object of such desire. Anjelica Huston can't quite decide on her accent (she seems distinctly Southern American in her initial scene), but does the hand-wringing thing well as her cover-up breaks down. James Fox ("The Remains of the Day") is a comic asset as her husband, Colonel Bob Assingham.

Director Ivory borrows from Jane Campion's "Portrait of a Lady" flourishes, using period title cards, old stills and period-look news footage to move his tale along. A secret meeting between Charlotte and Amerigo at a wax museum is heightened when the eyes from a tableau seem to follow the duplicitous couple, yet a horrific tale from Amerigo's ancestry used to bookend the film is heavy handed. Costume, art direction and locations are lush beyond measure and a treat for the eye.

Adultery is the key word in the latest effort by the directing, producing and writing team of James Ivory, Ishmael Merchant and Ruth Prawer Jhabvala as they bring yet another Henry James novel to screen life in "The Golden Bowl."

Adam Verver (Nick Nolte) is a fabulously wealthy American industrialist, possibly the world's first billionaire, living in the lap of luxury in Europe with daughter, Maggie (Kate Beckinsale). They meet, in their travels, a self-styled matchmaker, Fanny Assingham (Anjelica Huston), who does her damnedest to get Maggie together with handsome, penniless Prince Amerigo (Jeremy Northam) from Italy. Fanny also pushes Adam into the arms of Charlotte Stant (Uma Thurman), Maggie's closest friend. Unknown to the Ververs, their soon-to-be spouses have just recently ended their own torrid love affair because the poor prince could not possibly marry an equally poor commoner. But, is the affair really over?

This is the third film that Merchant/Ivory/Jhabvala have adapted from the collected works of turn of the 19th century American novelist James. ("The Europeans" and "The Bostonians" were their previous efforts.) I have never been a fan of James's late 1800's era stories, finding his work too stern and without humor, unlike, for instance, Jane Austen, whose earlier period work - of Englishmen, rather than Americans - are bright and full of wit. James is more concerned with the darker side of the human psyche and "The Golden Bowl" is burdened with an almost relentless dourness with it's tale of deceit and infidelity.

The story keeps its focus on the four principals and the dynamics of the weird quadrangle of relationships. There's the close, almost spousal, bond between Adam and Maggie, as the father and daughter have had to depend on only each other for many years. A formal link exists between Maggie and Amerigo as the princely pauper uses his wife's vast wealth to rebuild his family estate. Amerigo is devoted to Maggie, but it's a devotion based on selfish motives, not love. Charlotte still actively lusts after Amerigo, but plays the game of loyal and loving wife to Adam. She and Maggie retain their best friendship even as she cuckolds her friend, but rends soon form in the delicate fabric of the relationships of the four. It's a lusty story that must have titillated the libidos of the reading public at the time the book was published.

Nick Nolte is proving to be one of the best senior actors in the business. He plays, basically, the other side of the coin of the character he created in Oliver Stone's "U-Turn." But, where that film's Jake McKenna (Nolte) was rich, powerful and ruthlessly evil, Adam Verver is rich and powerful, too, but also kind, generous and zealously devoted to his daughter. Nolte puts completely different spins on his characters, always making them unique. Beckinsale's Maggie is such a good, loving person, that she is almost too good to be a real person. The actress gives dimension to her performance and a believable, loving grace to Maggie that garners sympathy. Northam seemed miscast, at first, as the Italian-accented Prince Amerigo, but soon displays the selfish weakness of the man convincingly. Uma Thurman, never one of my favorite actresses, is terrific as the hedonistic, conniving Charlotte and reps one of her best perfs to date. Award considerations are not out of line.

Supporting cast is limited, but there are a couple of interesting characters floating around in the background. Huston, as Fanny, plays that catalyst that gets things in motion among the principals. Her accent strays between American/Southern and American/Neutral, but the role she plays is important to the fabric of the film. James Fox does a fine job in the small role of Fanny's husband and confidant, building his Bob Assingham into a real, and amusing, person.

The symbolism of the titular object is wrought throughout the film as the apparent perfection of the golden bowl, like the perfection of the marriages, is suspect and the flaws become obvious to the players and the viewer alike. The juxtaposition of the cracks in the bowl and obvious marital flaws of the characters is obvious, and a little heavy-handed, symbolically.

The production, as expected from this team, is sumptuous. The film looks terrific with authentic-feeling period sets and costumes, showing off the talents of a veteran group of behind-the-camera craftspeople. The lush, crisp photography by Tony Pierce-Roberts captures, vividly, the actions of these aristocrats and their times. Director Merchant musters his forces well, but, in the end, the story doesn't compel me, making the film feel too long.

"The Golden Bowl" is a strong effort that is burdened by the source material or its adaptation - not having read the novel, it's hard to tell.