The Gleaners and I 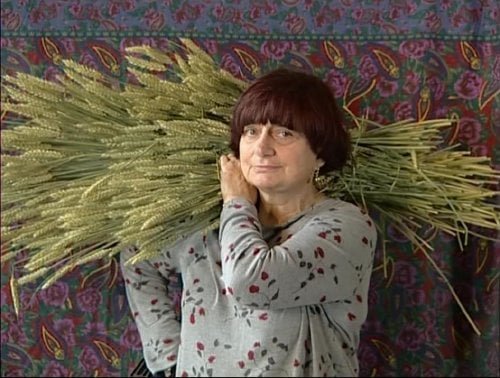 Septuagenarian filmmaker Agnes Varda ("Vagabond"), frequently called the grandmother of the French New Wave, caught a bit on television about the amount of money lost by a wheat farmer if his combine wasn't adjusted properly. This made Varda, an art lover, recall the famous Millet painting 'Les Glaneuses' and the idea of taking to the road to investigate this rural activity and its modern counterparts gave birth to her award winning documentary, "The Gleaners and I."

Varda's film is an unusual combination of a diary reflecting on her own aging, a road trip, and the documentation of the economic, societal, cultural and artistic reasons that people have for gathering the refuse of others. While sometimes Varda's digressions indulgently stray too far from her main theme, for the most part she's found a rhythm that can tie rural, post-harvest gleaning to a court case involving homeless youngsters who vandalized a market. When she veers from a family who've discovered an abandoned vineyard to spend a minute on her own camcorder's dangling lens cap, frustration felt by the viewer is quickly assuaged by her good natured spirit.

Of course, Varda makes a point that filmmakers themselves are gleaners, and that dancing lens cap footage may just be proof that one man's wasted videotape is another's art. Varda uses famous paintings of gleaners to segue to stories of artists who recycle trash to create new works. Then, in another aside, Varda ventures into a second hand store because she's charmed by the sign (''curios' is common, but 'finds' is more inviting,' she says) and fatefully discovers an oil painting of gleaners in the field!

Varda has conversations with the many types of gleaners she comes across. There's a chef who charges $100 a plate for meals he prepares from his gleanings and a financially secure man who only eats from the trash in protest of the waste he sees all around him. A funny sequence gets as many interpretations of the law that governs the gleaning around oyster beds as people providing them. Varda admires a 'Trash is Beautiful' educational program that teaches kids about recycling, then notes that they're only exposed to pretty pieces of plastic and have probably never shook the hand of a garbage man.

At 82 minutes, "The Gleaners and I" covers a lot of territory. Not only does it provoke thoughts about waste in general, it engages us with an impish senior still breaking new ground in the art of filmmaking. As Varda cuts from a shot of her own wrinkled hand to a Rembrandt, she reflects 'It's always the same, a self portrait.'

The gleaners of yesteryear were peasant women who rummaged for the bits of wheat left over from the harvest. Documentary filmmaker Agnes Varda studies the modern day foragers of France who now glean (or, gather) everything from grapes to garbage to clocks without hands in "The Gleaners & I."

This is an uneven little documentary that benefits, greatly, from its untapped subject matter. As far as I know, there has not been another film to cover the lifestyle of the gleaners of the world, and the grandma of French New Wave cinema, Varda, gives us a unique view into an unusual world.

The original gleaners had been such a presence in the old agrarian culture of France that it eventually became the institutionalized right of the practitioners of the gathering art. Today, legal statutes guarantee that the traditional rights of the gleaner continue, unfettered, following the harvests throughout the country. We learn about the differences between the gleaners, who turn the earth to find their treasures, and the pickers, who invade the vineyards and orchards after the harvest. There is even a subculture that reserves the right to glean oysters following that harvest.

Varda goes on to compare the nature of gleaning and the similar methods that the urban homeless use to garner enough to eat and live, without money, in the cities. The marketplaces that carry the fresh produce for the urban areas, at the end of the day, become the place for the scavengers to go to search for anything that is left behind. Fresh fruit and veggies, cheese, meat and fish are gathered to feed those who take the time to live off of the land.

Varda's roving video camera follows other modern gleaners who choose to collect the cast-asides of society, like TV's, refrigerators and stoves, to repair and sell to survive. Still other foragers use the public's detritus for more esoteric uses, like artistic expression. Today, gleaning is not just for wheat gatherers anymore.

Agnes Varda captures some fascinating moments during the course of "The Gleaners & I," but as I said earlier, the effort is uneven. Some of the more interesting stories and styles are given short shrift, while other, less interesting, subjects are given far too much air time. Varda also intrudes herself in the film (the "& I" of the title) in an effort to show that she, with her video camera, is simply another gleaner let loose on the world. When the documentarian chooses to be a subject and not just an observer, attention is taken from the real subject. She indulges, in one far too long a scene, in taping a dangling lens cap from a camera left running. The dance of the cap reps Varda's own gleaning of the images she captures, accidentally or not. Mostly, her intruding is an annoyance in what is otherwise an interesting documentary.

I give a qualified recommendation for "The Gleaners & I" since it offers a view into a world unknown to us. In fact, with the American obsession with rights of privacy and property, the gleaner could not even exist here, but continues to thrive in France.