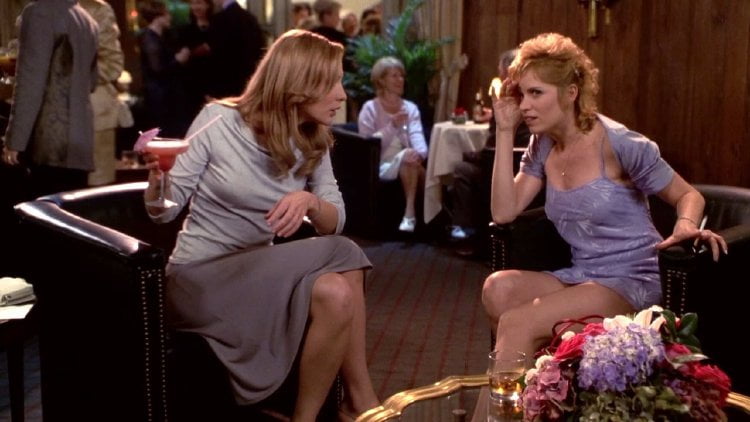 Annie Wilson lives in the small Southern town of Blixton, Georgia, with her three sons. The young widow has a knack for psychic vision and is called upon by certain of the town folk to give readings, explain the past and predict the future. Her talent is sorely tested when a rich socialite disappears and Annie is called in by the police to help find the missing heiress in Sam Raimi's "The Gift."

With the talent involved in this project, from director Sam Raimi ("A Simple Plan") and cowriters Billy Bob Thornton and Tom Epperson (both of "One False Move") to the unusual ensemble cast (featuring one Oscar winner - Swank, and three nominees - Blanchett, Kinnear and Rosemary Harris), one would expect "The Gift" to be one humdinger of a film. Alas, although Blanchett once again gives a flawless performance, "The Gift" is a mediocre thriller. Think "What Lies Beneath" crossed with "To Kill a Mockingbird."

Through Annie, we're introduced to the cast of characters. Buddy (Giovanni Ribisi, "Boiler Room") is the slow witted auto mechanic who's devoted to Annie, but clearly is disturbed by something repressed from his childhood. Valerie's Annie's battered client who's abusive, redneck husband Donnie (Keanu Reeves) threatens not only Annie, but her children, because of her 'interference' in his marriage. He's also known as a bit of a ladies' man, which makes Valerie jealous. Wayne Collins (Greg Kinnear) is the mild mannered school principal engaged to wild child rich girl Jessica (not only does Annie have a nightmarish vision upon meeting Jessica, she finds her in a compromising position in the country club ladies room on only her second encounter with the woman). Already we have more red herrings than we can shake a stick at.

The screenplay makes obvious choices and overplays its Southern Gothic hand (Ribisi's character may as well have been called Boo Radley). Character development is lacking, particularly with Annie's three sons. We're given hints that Annie isn't coping well with her husband's death and that her behavior is impacting that of her eldest son, but the screenplay allows these hints to suffice rather than delving more deeply. Wayne and Jessica as a couple are a head-scratcher. The film's climax is more than a bit shopworn.

The cast is mostly fine with Blanchett elevating the film above its pulp trash roots. Reeves is quite effective as the brutish husband, creating a real fear of violence whenever he appears. Swank follows her tour de force Oscar winning performance by playing it safe in a small supporting role. Gary Cole ("A Simple Plan") makes a mark as an unethical prosecution attorney.

Technically, the film is rather conventional showing none of the distinctive stylishness of Raimi's earlier work. Kudos, though to visual effects supervisors Syd Dutton and Bill Taylor, who create some eerie visions from Annie's point of view. Original music by Christopher Young ("The Wonder Boys") features fiddles to create a sense of place while also underlining the suspense.

As a filmgoing experience, "The Gift" is like getting a Crackerjacks prize in a Tiffany box.

Director Raimi has had a most rewarding and eclectic career since his breakthrough "Evil Dead" films. He has created stylish films like "The Quick and the Dead," "A Simple Plan" and the sometimes beautiful "For Love of the Game," always putting a different spin on each work. He continues this track record with "The Gift," a supernatural thriller that is a showcase for its star, Blanchett.

The story, by Billy Bob Thornton and Tom Epperson, is a middling entry for Raimi that is, disappointingly, a conventional whodunit coupled with supernatural power. Annie has psychic powers that allow her to help the various members of Brixton society who have come to depend on the gifted woman.

Her steady stream of troubled clients includes Valerie (Hilary Swank), a badly abused woman who comes to Annie for help but refuses to follow the psychic's advice to leave her violent husband, Donnie (Keanu Reeves). Donnie, a real redneck's redneck, declares Annie a witch working for the devil and threatens her and her boys with violence if she continues interfering in his life. Another patron, the simple but very troubled Buddy (Giovanni Ribisi), seems to be collapsing within himself over childhood abuse by his father, but may hold the key to later events.

The crux of this southern Gothic yarn is the disappearance of society girl Jennifer King (Katie Holmes). Jennifer is high school principle Wayne Collins' fiance, but Annie soon learns the young woman has a promiscuous and selfish streak, catching her in flagrante delicto at one point. When Jennifer disappears one night, her frantic father begs Annie to use her power to find his daughter. The visions she has lead to the arrest, conveniently, of Donnie, sending the wife beater to prison for murder and out of Annie's life.

This is where the convention of the story replaces imagination. From here on in, doubt is raised as to Donnie's guilt and one suspect after another start to come out of the woodwork. Almost everyone who has a line in the movie falls under the suspicious gaze of the camera as Annie's psychic vision point to one, then another, possible murderer. It gets very confusing and forces the story to unravel into a morass of faux accusations. So many suspects crop up over the course of the movie that I thought I was watching the psychic edition of "Clue." The whirlwind of this whodunit replaces suspense with a series of false leads as the real killer is eventually brought to justice.

As I said, "The Gift" is a showcase for the very talented Cate Blanchett. Since her breakthrough performance as the young queen in "Elizabeth," the actress has shown versatility and is capable of a myriad of accents and characters. With her natural-sounding southern drawl, Blanchett pulls you into her character and the danger and confusion that her gift can cause. Even as she tries to help here clientele with her visions, she denies the impact they have, repeatedly, when they involve her or her own. It's not the best performance of the year, but it does further establish the actress as one of the most talented in the business today.

The supporting cast surrounding Annie provide an assemblage of two-dimensional characters, here to give cause to the mystery and not too much more. Keanu Reeves shows himself to be an actor willing to go against type and be something other than just a pretty face. As such, he brings attention to his character, Donnie Barksdale, and you believe, though he is a wife-beating jerk, he is no murderer. Hilary Swank does her best as the one-note Valerie, but the Academy Award winning actress is not given much to do as the abused wife - except to look extremely abused. Giovanni Ribisi needs to get his agent to get him roles other than the simple characters he has played of late. Greg Kinnear and Katie Holmes are miscast as a couple. Holmes, in particular, is too young for the femme fatale she is supposed to be.

The moody production fits the temperament sought for "The Gift" with the dark, atmospheric night scenery and swirling fog. It looks good and couples nicely with the story up to the first half. After that, as the tale gets confused, the decent techs become background only.

The draw to "The Gift" is Cate Blanchett. She is worth the price of admission, though the movie, overall, is less than her considerable efforts.