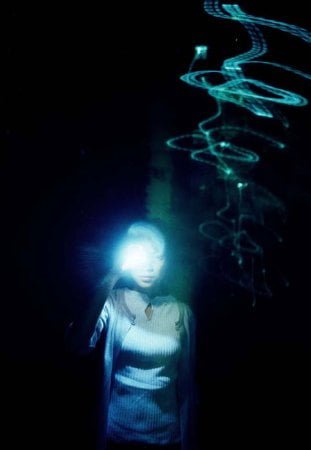 When Mun (Angelica Lee), who has been blind since the age of two, receives a cornea transplant, her surgeon Dr. Lo (Edmund Chen), refers her to his nephew Wah (Lawrence Chou), a physiotherapist who helps people relearn brain/eye coordination. But Mun's problems aren't run-of-the-mill - she's having someone else's nightmares and seeing the dead, so smitten Wah agrees to help Mun trace the donor of "The Eye."

The directing/editing team of brothers Danny and Oxide Pang ("Bangkok Dangerous") make their Chinese entry into the Asian horror boom with "The Eye." Writers Oxide Pang and Jo Jo Yuet-chun Hui borrow liberally from such films as "The Sixth Sense," "The Eyes of Laura Mars" and even "At First Sight," ensuring that any genre buff will know exactly where "The Eye" is headed, but the Pangs, cinematographer Decha Srimantra ("Bangkok Dangerous") and their special effects team deliver enough stylish jolts to make this a worthy addition to the horror catalog.

The film begins cheekily by making the audience think the film's caught in the projector gate, then neatly issues its title credits in braille against a white film being 'read' by hands on the other side (a device that loses its effectiveness quickly). We're catapulted into the hospital with Mun and her 10-year old roommate Yingying (Yut Lai So), a cancer patient it's easy to guess will be conversing with Mun after death. As Mun's sister Yee (Candy Lo, "Time and Tide") and grandmother (Yin Ping Ko) watch anxiously, Dr. Lo removes Mun's bandages, but the bright light and good sense make Mun retreat behind her eye coverings. Shed of them the following day, Mun spends quite a bit of time looking into a mirror (whose reflection is kept from the audience), then witnesses an old woman led away by a shadowy figure, then discovers the woman in the hallway moaning about cold. At home grandmother becomes alarmed when Mun mentions a boy looking for his report card and begins exorcism rituals. Mun dreams of an unfamiliar place, and awakens terrified to find herself in a room that takes its time morphing back into her familiar one. Upon witnessing Mun's distress, Wah strong arms his uncle into obtaining the cornea donor's file and he and Mun travel to Thailand to investigate.

Angelica Lee gives a textured performance, thoroughly believable first as a blind woman, then someone readjusting to sight. She shades her reactions gradually from curiosity to confusion to fear. The other performances are generic, with the exception of young Yut Lai So as Yingying, a character we mourn along with Mun. Chutcha Rujinanon has presence as Ling, but she's relegated to creepy posturing and flashbacks, much like Daveigh Chase in "The Ring."

Srimantra uses plenty of slick focus effects to give us Mun's POV during her various stages of sight. Effects are beautifully done, with the dead chillingly rendered and introduced in heart-stopping fashion via the Pangs's editing. The 'angels of death,' however, come across like Kabuki mime hipsters, but the morphing bedroom has the feel of a dark cloud passing overhead. The film's climax is a textbook build of suspense. Original music by Orange Music ("Bangkok Dangerous") is a mix of standard genre pulse quickening pounding mixed with cheesy synth.