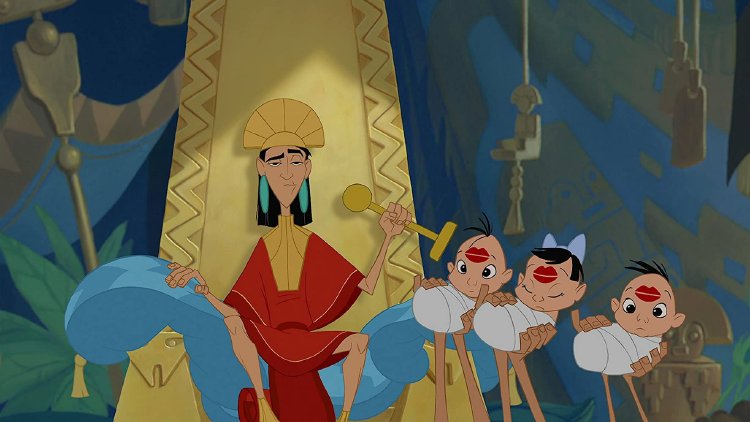 18-year old Emperor Kuzco (David Spade) is an arrogant, egocentric and selfish young ruler whose philosophy on the lives of his subjects is "don't know, don't care." Kuzco is so interested in himself and his own pleasures he doesn't have a clue that his new summer home, Kuzcotopia, will displace a caring and kindly peasant, Pacha (John Goodman), and his family. Meanwhile, wicked advisor Yzma (Eartha Kitt) has her own designs on the throne and turns the unsuspecting monarch into a llama. It's up to Kuzco and Pacha to restore him to his human form, return him to the throne and thwart Yzma's plans in Disney's latest animated feature, "The Emperor's New Groove."

The one word that jumped into my head after seeing the latest in Disney's long, long line of animated films is "serviceable." The history behind the creation of "The Emperor's New Groove" goes back to 1994 when the project was called "Kingdom of the Sun," a dramatic story inspired by pre-Colombian legend. As the development process moved along, the tone of the project changed from the serious to the silly. With the original dramatic intent taken away, the film became a light comedy with state-of-the-art animations and an insubstantial story, though a cute one.

Emperor K is a spoiled brat whose own wants and needs are first and foremost in his mind. He summons peasant Pacha to the palace to inquire about the beautiful hilltop where Pacha and his family live. Pacha assures his master that his hill is so special, it makes music. This sounds so good, Kuzco decides that his newest palace, with pool, will be built there and tells Pacha to move. The despondent, but loyal, peasant heads home to break the bad news to his pregnant wife, Chicha (Wendie Malick), and five daughters.

As Kuzco blithely makes his plans, his ancient and conniving advisor, Yzma, has delusions of grandeur of her own. The wicked counselor has, for years, used her exalted status to insinuate herself into a position of power. When the self-centered Kuzco, putting his own selfish desires aside for a moment, realizes that Yzma is usurping his throne, he fires her on the spot. But, since only Kuzco, Yzma and her loyal henchman, Kronk (Patrick Warburton), know about the dismissal, she decides the best course of action is to poison the egotistical sovereign and take over his kingdom. The plans go awry from the start when Kronk gives Kuzco extract of llama instead of a poison cocktail.

Kuzco, now a talking llama, has no choice but to enlist the help of Pacha in getting back to the palace and changing back to human form. Meanwhile, Yzma, realizing that Kronk could not kill the llama king (Kronk is your basic nice guy), heads out with her muscle-bound assistant to finish the job herself. It becomes a race against time and nature as Kuzco and Pacha must brave fierce crocodiles, deadly scorpions and startled bats in their journey to the castle. It is also an odyssey of change for Kuzco as the selfish boy-king learns the value of friendship and generosity and becomes a good man and better emperor in the end.

As Disney animations go you can see the force of skilled animators at work beneath the surface of the movie. Visually the characters are finely honed caricatures as they represent simple human virtues and flaws. The emperor, as voiced by Spade, is really a spoiled brat, used to getting what he wants whenever he wants. Good or bad, this self-centered attitude lasts through most of the film, changing only when the final climax looms. The selfishness and smart-ass attitude given the character by Spade gets tired after a while. Fortunately, his one-liners, peppered through the film, help get you by the rotten little kid aspect of Kuzco.

John Goodman is one of the serviceable aspects of the film, as is Eartha Kitt. Goodman's Pacha is a big-hearted, good-natured peasant who loves to give to those around him. It's rather inevitable, with such a companion by his side, that Kuzco is going to learn some valuable, life-affirming lessons. Kitt gets a low-rent version of Cruella DeVil to play with and does a decent job breathing life into the old crone that wants the throne.

Stealing the show, though, is Patrick Warburton as the lovable Kronk. The amiable big guy (he's a size 66 long with a 31-inch waist) is more interested in the quality of his cooking than in his henchman's duties. He's particularly proud of his spinach puffs, truth be known. Warburton and his animation team and writers create a funny, likeable character that is supposed to be bad but can't be. After all, he was a Junior Chipmunk as a kid and learned how to talk to squirrels, so how bad can he be. Beyond the four leads, though, there is little background activity for minor characters, giving the film a flat feel.

The animation processes used here are the epitome of the quality that we expect to come out of Disney Studios. There isn't any breakthrough development as was the case with the "deep canvas" process developed from "Tarzan," but the creators of "The Emperor's New Groove" utilize every tool at their disposal to create a fine visual work. The combination of the animation and, again I say, the serviceable vocal and writing talents involved help create a light bit of comedy entertainment that will please all ages, but won't make a lasting impression.

Animation director Mark Dindal co-wrote the story with screenwriter David Reynolds. They succeed in making a Disney-lite effort that is fast-talking and very, very hip - mainly due to Spade's chatter and Kronk's likableness. It fills the bill for the holidays and will keep the kids quiet and adults entertained. In the end, "The Emperor's New Groove" is a popcorn movie