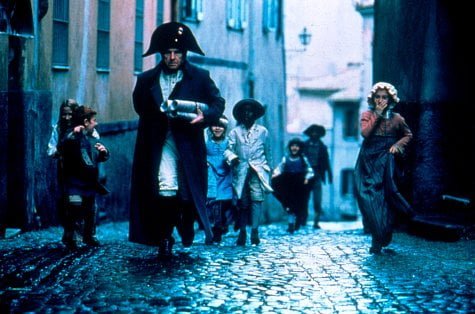 History tells us that Napoleon Bonaparte, after his army's epic defeat at Waterloo, was exiled to the remote island of St. Helena where he spent his final years 'til his death in 1821. But, what if the man who died was an impostor and the real monarch escaped to France to reclaim the throne? This is the intriguing idea that helmer Alan Taylor examines in "The Emperor's New Clothes."

As reimaginings have become popular in literature, so now too the movie screen offers us a historical reimagining - what if Napoleon had escaped his exile on St. Helena with the assistance of a double and made his way back to Paris in an effort to regain his throne? Ian Holm ("The Sweet Hereafter") stars as Bonaparte and the lookalike deckhand Eugene who grows too fond of Napoleon's lavish lifestyle in "The Emperor's New Clothes."

As adapted by Kevin Molony from Simon Leys' novel "The Death of Napoleon" and directed by Alan Taylor ("Palookaville"), Napoleon's journey is interesting but his Parisian rebirth is stillborn. It's a pleasure to watch Ian Holm in a double role and Iben Hjeile ("High Fidelity") is natural and well cast as his love interest, but the story is too slight, it's pacing too given to fits and starts, to make this a wholly satisfying experience.

Holm colors Bonaparte's imperiousness with shades of humorous empathy. When describing his boredom with the confines of St. Helena, he tells a faithful servant 'You're quite ugly you know. I didn't have the heart to tell you.' Upon meeting his coarser self at the shoreline, he seriously despairs as to how the charade will work with a man who looks nothing like him!

Horrified when his ship bypasses his arranged landing at Brest, where he was to meet a trusted emissary, Napoleon must take a coach from Brussels which travels to Paris via Waterloo. Sickened by the site of his battlefield turned tourist site, he oversleeps at the inn and misses his coach. After a small but touching scene with maidservant Adele Raffin (the notable Haley Carmichael), he's arrested, but Sgt. Bommel (Clive Russell, "Oscar and Lucinda") is an insider who provides a bear hug and a horse.

In Paris, Napoleon mostly waits for the unveiling of the imposter in order to make his move. The film rouses itself when Napoleon turns around Pumpkin's (Hjeile) fruit business with military strategy, but little else really happens. When the imposter dies, Napoleon can't convince anyone of his identity, which never rings true (as does his adjutants failure to expose his double before his death). The one man who had guessed it, Dr. Lambert (Tim McInnerny, "Notting Hill"), suppresses the information in a jealous pique. Pairing Napoleon with a strong businesswoman was a good idea, but there's no passion in the relationship. A young boy who lives with Pumpkin, Gerard (Tom Watson), serves no narrative purpose.

Director of Photography Alessio Gelsini Torresi ("La Scorta") props up the weak storyline with some gorgeous shots. Napoleon is awakened by another deckhand to enjoy the cloud-streaked, powder blue and peach sky of dawn. Napoleon strides towards a palace as two columns of guards march towards us. Silhouettes and a magic lantern are artfully employed.

"The Emperor's New Clothes" lacks the grandeur of its subject. It's a slight film held aloft by beautiful imagery and its engaging leads.

The "what if?" story of "The Emperor's New Clothes" begins with a simple plan: find a suitable imposter to take the place of the exiled emperor, allowing Napoleon to escape his prison on St. Helena. The monarch, incognito, makes his way to Paris and freedom. Once he is in place, the imposter declares himself a fake and the people of France will rise up to support Napoleon's return to power and his empire will be reborn. Well, at least that's the plan.

As Bonaparte makes his way to the French capital, in a roundabout manner he didn't expect, the imposter, a waddling, drunken galley hand named Eugene, finds that the life of an exiled emperor isn't all that bad. Eugene, now Napoleon, immediately takes to impersonating the great leader and, when told that the time has come to unveil his true identity, the faux former emperor flatly refuses. The real Napoleon waits impatiently for the announcement by the fake, ready to take back the throne of France. Then, the imposter dies and the best-laid plans of the former emperor are all for naught.

While Napoleon, now Eugene, waits for word from St. Helena, he meets a pretty, but impoverished, young widow named Pumpkin (Iben Hjejle) and, through her good graces, finds a place to rest his head until he can return to power. To wile away the time, he helps out with Pumpkin's failing fruit and vegetable business, turning it around and making it a success, utilizing his warrior skills in the commercial marketplace. He falls in love, but still hangs on to the plans to regain his throne. When the "emperor's" death is announced, the real Bonaparte has no recourse but to stay where he is. He struggles between his desire to get back his power and being a commoner who has fallen in love.

Technically, "The Emperor's New Clothes" is a striking film to watch. The outstanding photography, by Alessio Gelsini Torresi, captures the varied scenery, from Napoleon's place of exile to the streets of 1800's Paris with particular artistry to the striking shots of rolling hills and colorful skies as Bonaparte makes his way to a freedom that is just a new form of exile. Production design, by Andrea Chrisanti, captures the early 1800's setting, as does costuming by Sergio Ballo.

The screenplay, adapted from Simon Leys' novel The Death of Napoleon, is an intriguing premise. Couple this concept with the dual roles played by the marvelous Sir Ian Holm and you're bound to get an interesting flick, at the very least. But, the premise loses steam when the imposter ups and dies and Napoleon is left without a plan. As the throne recedes from his grasp, Napoleon/Eugene must face a life as a commoner. The story becomes an inner struggle, for the ex-monarch, between his desire to rule France and the love of a good woman. Much of the humor in this romantic comedy stems from the character of the imposter, the real Eugene. Unfortunately, there isn't enough of the buffoonery of the fake, a miscalculation in maintaining the balance of the story.

Ian Holm is a capable, sometimes brilliant actor who effectively plays the two very different men. As Napoleon, he has the regal, militaristic bearing of a conqueror, but realizes that he is helpless to regain his former power without the confession of his now dead impersonator. In one potent scene he is shown, by a doctor (Tim McInnerny) who also loves Pumpkin, just what faces him if he persists in demanding that he is Bonaparte. (The doctor delivers him to an insane asylum where all of the inmates have a Napoleon fixation. The former monarch and conqueror gets the point.)

Iben Hjejle puts a modern spin on Pumpkin, a resourceful woman who, because of Napoleon's many years of conquering, has had to cope without her soldier husband's presence. The Scandinavian actress plays a strong-minded, kind-hearted and loving woman who admires and respects Eugene. Even though she refutes his claims to be emperor of France, she does tell Eugene "you're my Napoleon." Hjejle is effective opposite Holm. The rest of the supporting cast is left mainly in the background and are there for Napoleon and Eugene to play off of.

What if Napoleon's did escape and not regain his throne? If "The Emperor's New Clothes" is correct he may just have lived out the remainder of his life as a very happy man.