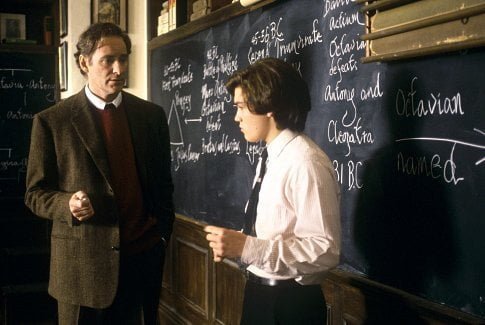 St. Benedict assistant headmaster William Hundert (Kevin Kline) strives to not only inspire his students with classical Greek and Roman history, but mold their character. In 1972, rich senator's son Sedgewick Bell (Emile Hirsch, "The Dangerous Lives of Altar Boys") challenges Hundert's authority with results that will reverberate for a quarter century in "The Emperor's Club."

Neil Tolkin's adaptation of Ethan Canin's short story "The Palace Thief" is a morass of conflicting moral messages bookended by an utterly ridiculous finale that seemingly exists because of the writers' urge to repeat history. Kevin Kline, a fabulous actor, is sliding into the career slump Robin Williams recently extricated himself from, his last worthy role having been 1999's Nick Botton in "A Midsummer Night's Dream," another subpar film from director Michael Hoffman.

Hundert is the opposite of "The Browning Version's" Andrew Crocker-Harris. He's loved by his students for his ability to bring ancient history alive and by a fellow teacher (Embeth Davidtz, "Bridget Jones's Diary") married to another man. He begins each year with the tale of Shutruk Nanhunte, a forgotten king of Elam, to illustrate that conquest without contribution is meaningless. 1972 begins promisingly, until Sedgewick Bell makes a late appearance. The cocky, good looking boy shakes up fellow students with shocking rule breaking stunts like boating across the lake to the neighboring girls' school and slipping a middle finger salute to Hundert during class.

At wits end, Hundert visits the boy's father (Harris Yulin, "Training Day") where he receives a verbal face slapping. Recognizing the cold distance of his own father, Hundert reaches out to Bell and finally succeeds in getting the boy to expend some effort. When St. Benedict's legendary Mr. Julius Caesar contest, which tests knowledge in Hundert's subject, begins to ramp up, Bell is actually in the running against such top students as Fred Masoudi (Jesse Eisenberg, "Roger Dodger"), Deepak Mehta (Rishi Mehta) and Martin Blythe (Paul Dano, "L.I.E."), a pupil under the added pressure of being the son of a former winner. When Bell ends up being 1 point shy of being one of the three final combatants, Hundert fixes the results costing Blythe his rightful place. This dubious action is repaid in spades by Bell's behavior during the final competition.

The story of a teacher who talks about no conquest without contribution and molding character is not well served by a script that sees him compromise himself out of vanity and misplaced sympathy, leave the scene of a crime in front of all his students and fold, not once but twice, under the weight of wealth and privilege. Yes, the contest rigging compromise is the crux of the story's conflict, but Bell's behavior seems more motivated by the pen than by character background. Bell's further acts twenty-five years later make no sense as he really has nothing to gain from them. Further, an entire class brought scholastically low by one boy's antics return as captains of industry, throwing out the 'conquest without contribution' baby out with the bath water. Hundert is also underhandedly outplayed for headmastership by a friend (Rob Morrow) he had initially recommended to the school, proving that none of his idyllic principles matter in the real world. Hundert, is, however, unconditionally forgiven by the man he wronged just in time for an ending right out of "Goodbye, Mr. Chips."

Kline could have played this role standing on his head, which may have been an improvement. Hirsch, Eisenberg and Dano all show growth in their sophomore roles and Yulin nails his one scene. Production values are all solid, with the exception of James Newton Howard's cliched scoring.

"The Emperor's Club" does succeed with its classroom interplay, but director Hoffman, his writer and Kline's agent should serve detention.

William Hundert (Kevin Kline) has long been the capable assistant headmaster at St. Benedict's Academy for Boys. He is also a dedicated teacher of the classics and works hard to open the minds of his wards to such works as Aristotle, Socrates and Julius Caesar until, one day, he is challenged by a new student, Sedgewick Bell (Emile Hirsch). A battle of wills and mind ensues as Hundert strives to teach the resistant boy in "The Emperor's Club."

I hold a warm spot in my heart for Kevin Kline. Even when he is miscast, as in "January Man," he puts a human spin on his characters. When he is hampered by an over the top script as in "Life as a House," he still imbues his natural humor, even in dramatic scenes. But, the insipid, shallow tale of "The Emperor's Club", based on the short story by Ethan Canin (The Palace Thief), has pretensions of being a combination of "Goodbye Mister Chips" (the so-so 1969 one, not he the 1938 Robert Donat version) and "Dead Poets Society," but the makers can't even come up with a less derivative title.

Hundert is challenged immediately by newcomer Bell, a rebellious student and the son of a prominent United States Senator (Harris Yulin). William takes on the dare and must go toe to toe with the new kid on the block as they each struggle for control of the other class members' hearts and minds. What should have been a story of challenge and education turns into a muddle of moral values and their compromise.

Focal to the film is the annual "Mr. Julius Caesar" intellectual shootout where Hundert's class members compete against each other until three earn the right to the final competition for the coveted laurel. This contest, which is used one last time a quarter century later, is really dumb and little more than a device to show what compromising your moral integrity will do.

The screenplay by Neil Tolkin feels like just what it is - a short story source that is stretched to feature length and, like an elastic band, is drawn too thin with the stretching. There is the "feud" that initially crops up between Hundert and Bell, which is resolved in a few brief scenes of bonding. Then the film gets muddled as this problem resolution is questioned when William catches his student cheating. But, Hundert is persuaded to overlook the dishonesty and he compromises his own high standards. Things don't get any better as William and Sedgewick go their separate ways, the younger man graduates, then we jump forward 25 years.

Hundert, upset that he is not given the headmaster's position after its former holder (Edward Herrmann) passes away, quits his job only to be pulled back by none other than Sedgewick Bell (Joel Gretsch). Bell wants to exonerate himself for past crimes by having his former professor preside over a reprisal of the notorious Mr. Julius Caesar contest that took place a quarter century before. History repeats itself and I sat there wondering just what the heck is going on.

While the production is well done, the story is so convoluted and unrealistic that the efforts of its star, Kline, to lend some dignity to a dumb story are for naught. I should never walk out of a film thinking that I wasted two hours of my life. That's just what happened with "The Emperor's Club."