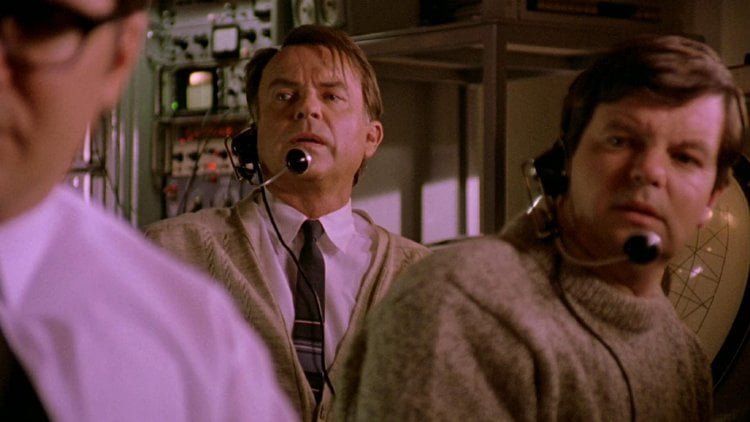 The manned landing on the moon on July 20, 1969, was the first, truly worldwide media event ever. 600 million people watched in awe when they saw and heard Neil Armstrong say, "That's one small step for man and one giant leap for mankind." What few of those viewers knew is that a remote Australian radio telescope team was responsible for those historic images and their story is told in "The Dish."

While the U.S. moon landing was a worldwide event, most people are probably unaware of Australia's role. In a sheep field in Parkes sits the largest radio telescope station in the Southern Hemisphere, a prime location to track communications with Apollo 11 and relay television pictures back to Earth. Three Australians and one American NASA technician will beat amazing odds to fulfill their task in "The Dish."

Although names have been changed by screenwriters Rob Sitch (director, "The Castle") and Tom Gleisner (also producer), "The Dish" is based on actual events of 1969. Recent widower Cliff Buxton (Sam Neill), a professorial, cardigan wearing, pipe-smoking type, leads the crew at Parkes' radio telescope. Glenn (Tom Long) is a literal, nerdy mathematician attempting to work up the courage to ask local lass Janine out. Mitch (Kevin Harrington) is Glenn's tormentor and the most perturbed by the presence of American Al Burnett (Patrick Warburton, TV's "Seinfeld"). Burnett's been sent in to coordinate the effort and checks and rechecks everyone's work to ensure a smooth operation. There's also a new member of the team, Rudi (Tayler Kane), Janine's rather simple brother who's been hired as a security guard.

Meanwhile Parkes' mayor, Bob McIntyre (Roy Billing) and his wife May (Genevieve Moy) are busy preparing for the arrival of such exotic visitors as the American Ambassador (John McMartin) and the Prime Minister (Billie Brown) while the exuberant teenage Army volunteer next door attempts to court their disdainful daughter Marie.

Things don't go smoothly. The local High School band plays the theme to "Hawaii Five-O" in place of the U.S. national anthem at the Mayor's reception. Then Parkes loses power and prideful Mitch must face up to the fact that his neglect to clear fuel pump lines has cost the telescope its backup generator. Cliff lies to NASA to buy time while the team frantically recalculates the equations needed to relocate Apollo 11 - even Al breaks character and lies to NASA. After this challenge is overcome, the team find that due to a problem in California, their station will be the primary television broadcast dish for the moon landing itself, while winds gust to levels more than twice what the dish has been engineered to sustain.

The ensemble cast breath humor and life into this story. Neill's Buxton makes us empathize with the bittersweet nature of his success in the shadow of his wife's death. His serenity has a calming effect on the other, more tightly strung crew members. Warburton shows range with his serious workaholic who allows the Australians to bring out a sense of fun ('I think we ate a whole sheep,' he tells Glenn and Mitch after returning from Sunday dinner at the mayor's). Tayler Kane provides most of the laughs as the self-important but imbecilic Rudi announces his presence in various 'sectors' of the station and believes he's talking to Neil Armstrong over his walkie talkie. Roy Billing is a delight as the mayor who retains his hominess while bidding for political recognition. McMartin plays the Ambassador as a stereotypical good-natured American.

Stitch keeps every element of his film perfectly calibrated. Cinematographer Wood is able to capture a shot to relay the laughs, romance or majesty required by the action. Editor Jill Bilcock artfully arranges those images, particularly in a fabulous montage which shows the mechanical workings of the dish played out against the late 60's instrumental "Classical Gas."

"The Dish" finds a place where gentle charm and humor live side by side with the awe and grandeur of man's accomplishment.

Director Rob Stitch, whose earlier comedy, the wonderful and goofy "The Castle," takes a different trail with this true-life story of the Australia's contribution in making possible for millions to actually see one of man's greatest accomplishments. The action takes place in the small town of Parkes, New South Wales, Australia where sheep are the main industry and the skyline is filled with the giant radio telescope called, simply, the Dish. The advent of America's mission to land a man on the moon brought the power of the Dish to the attention of NASA and an official request for help was made to the Aussies.

Cliff Buxton (Sam Neill) is the director of the Dish project, but the worldwide visibility of the moon mission prompts NASA to send their own man to take over the show. Al Burnett (Patrick Warburton) is a high-powered NASA tech sent on site to assume command of the Australian operation and is resented by the local technicians as a know-it-all interloper. As the Apollo 11 launch date approaches, tension run high at the dish site. Personal conflicts seem destined to overwhelm the important space mission. Then, real disaster strikes!

An unexpected power outage in the town also hits the Dish station. One problem mounts on the next when the backup generator fails to kick in. It is discovered that Burton's main opponent, Mitch, forgot to prime the fuel pump, causing all the computers to lose their programs and, most importantly, the coordinates of the Apollo 11 spacecraft. The crisis unites the team, Aussie and Yank alike, and they work hard together to make things right - after blatantly lying to NASA about their problem. When the time does comes for the first link with the astronauts, the plucky team of astronomers overcome monumental challenges to fulfill their own mission to the world.

As the landing approaches, NASA decides that the Parkes dish will be in the best position to receive the first televised images from the moon. But, things get even more complicated when high winds suddenly whip the area and threaten to stop the Dish and its crew from accomplishing their own special task for posterity. It's science's chance to be daring and the telescope team is ready to risk it all to give the people of the earth their first glimpse of the first moon landing.

Helmer Stitch works with many of the same folk that made "The Castle" such a charmer. Where the earlier film used comedy to tell a quasi-serious serious story of a man saving his home from ruthless developers, "The Dish" takes a real, historical event and tells the story in a straightforward fashion. What keeps the film from being just a docu-drama is the keen wit and humor that underlies the serious subject. Besides the Dish folk and the government mucky-mucks that descend upon the station are the oddball characters that live in the town of Parkes.

The large ensemble cast breaths life into the characters of the town and dish station, making Parkes the kind of place you'd like to visit some time. The crew members of the Dish, led by Neill, are real people with real hopes and dreams. They are proud of their abilities and talents and come across as a true team. Roy Billing, as Parkes' mayor Bob McIntyre, is politically ambitious and sees the big event as his chance at the big times. He, his wife May (Genevieve Moy) and military academy-attending son Billy (Carl Snell) lead the sometimes quirky townsfolk in their celebration of the town's involvement in the great event. Tayler Kane, as the Dish's goofy security guard Rudi Kellerman, get the most outright guffaws with his not-quite-with-it perf.

The on-site locations and solid cinematography by Graeme Wood give the film a majestic look of man's technical capabilities. Amazing detail is given to the production design, by Carrie Kennedy, capturing the 60's period feel and look - especially of the now-archaic computer equipment that was state-of-the-art at the time. We're so used to super fast computers and the internet, it's nice to get a realistic glimpse of where all our modern technology came from.

The goofy comedy that is liberally sprinkled throughout the film is represented in a single scene where the local band is requested to play the American national anthem for the visiting US ambassador (John McMartin). I won't spoil the gag, but the tune they play definitely ain't The Star-Spangled Banner.

The Aussie humor may not hit home ever time for American viewers of "The Dish," but the sincerity and warmth given to the telling of such a momentous event will appeal to everyone everywhere. I can't wait to see what Rob Stitch and company will come up with next.