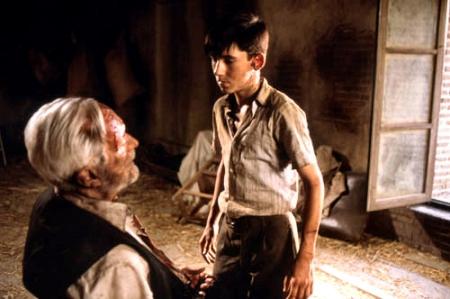 "What is a ghost?  An emotion, a terrible moment condemned to repeat itself over and over?  An instant of pain perhaps?  Something dead which appears at times alive.  A sentiment suspended in time...like a blurry photograph...like an insect trapped in amber."

Set in a remote orphanage in Spain during the civil war in the 30's, ten-year-old Carlos (Fernando Tielve) is left at the door of the Santa Lucia School during the waning days of the war. An unexploded aerial bomb dominates the school's courtyard and, when it hit, one of the orphans, Santi (Junio Valverde), mysteriously disappeared. Stories abound over what happened to the missing child but Carlos will uncover the shocking truth in "The Devil's Backbone."

In a remote Spanish orphanage, a young boy runs across a moonlit courtyard and watches in astonishment as a Fascist plane drops a bomb. The missile lands nose first a scant few feet in front of him, but doesn't detonate, a metaphor for the more horrific event Jaime (Inigo Garces) has just witnessed and keeps secret in writer/director Guillermo del Toro's "The Devil's Backbone."

This Spanish Civil War era ghost story is also a coming of age tale, a love triangle past and present and an account of greed and betrayal. Del Toro's unusual narrative is centered around Carlos (Fernando Tielve), a ten year-old new arrival at the Santa Lucia School who finds a friend in old professor Casares (Federico Luppi, "Cronos") and a tormentor in the older Jaime.

No sooner is Carlos within the school gates than he sees the spirit of a young boy standing in the kitchen doorway.  Carlos learns that 'The one who sighs,' as the other boys call him, may be Jaime's missing friend Santi, who used to occupy the bed he now sleeps in.

As the children gradually gain trust over comic books and camaraderie, the adults' community is breaking down.  Professor Casares loves the principal Carmen (Marisa Paredes, "All About My Mother"), widow of his old friend and a Red supporter hiding gold bars for the cause.  Yet it's clear his age prevents him from expressing his love physically.  Carmen routinely satisfies her lust with caretaker Jacinto (Eduardo Noriega, "Open Your Eyes"), a former pupil, even though it fills her with shame.  Jacinto, who is outwardly courting Jaime's crush, cook Conchita (Irene Visedo), hates the school and lusts after its gold.

When Dr. Casares witnesses several of their friends executed by Nationalists, he races back to the school to evacuate everyone, inadvertently lighting Jacinto's fuse.  The resulting explosion exposes the adults' earthly issues with the children's haunting secret.

Del Toro's period political tale of an orphanage is like a South of the Border version of "The Cider House Rules" (which had ghosts of its own), with references to such disparate films as "The Treasure of the Sierra Madre" and "The Lord of the Flies."  This darker story is stunningly photographed by Guillermo Navarro ("Cronos") in a palette of blue, brown and gold.  The amber referred to by Casares is reflected in the aged rum, rumored to cure impotency, which preserves the jarred fetuses in his office, one of which has spina bifida, or 'the devil's backbone.'  Del Toro's images are inventive, from his imagining of the ghost as a sunken eyed ghoul, blood floating upwards in a spiral from a head wound, to the brackish pool in the kitchen's basement which houses it .  A huge, heavy wooden Christ on a crucifix is dragged into the courtyard by small boys while the jointed wooden leg Carmen straps on each morning plays a most surprising role in the latter part of the film.

This haunting, melancholy tale is anchored by Luppi's sad, quiet performance. Just as "The Devil's Backbone" lays one ghost to rest, it raises another.

Helmer Guillermo Del Toro, who came to international prominence with his stylish 1992 horror film "Cronos," once again traverses the realm of the supernatural with his latest ghost story told through the eyes of young Carlos. Soon after he arrives at the leftist-leaning orphanage run by the aristocratic, one-legged Carmen (Marisa Paredes) he sees what looks like a young boy lurking in the shadows. He is also menaced by the oldest kid at the school, Jaime (Inigo Garces), the leader of the ragamuffins, and the school's caretaker, Jacinto (Eduardo Noriega), a brooding, conniving guy who harbors a hate for the school and the teachers that raised him.

Carlos learns that the boy he saw is the ghost of the missing Santi. He is scared to death at first but learns that the spirit is seeking his help in bringing justice to the one who brutally murdered him. This mystery is punctuated by Jacinto's greedy search for the hiding place of the gold bullion Carmen is holding for the Republicans in their fight against the fascists. The ruthless Jacinto will stop at nothing to achieve his unscrupulous ends and the result is death and destruction.

"The Devil's Backbone" is an intelligent, inventive ghost story/murder mystery that intrigues the mind with its deft combination of supernatural melodrama and tale of revenge. The haunting of the school by little Santi is subtext for the day to day life of the boys in the Santa Lucia School. We learn the hierarchy of the students and their relations with each other; Carmen and the school's doctor and local medicine man, Casares (Federico Luppi), have a twilight relationship; Jacinto has sex with Carmen in order to get the gold while he also carries on with the school's cook, Conchita (Irene Visedo; and, the fascist forces are fast approaching the doors of the refuge.

All of the various story threads are well explored by a cast that is a mixture of seasoned veterans and newcomer kids that reps a terrific ensemble. Helmer Del Toro works his actors with a firm hand that elicits convincing performances. Young Tielve is charming and likable as the film's protagonist, Carlos, and is complimented by Garces as the domineering Jaime. Luppi, who achieved international acclaim in "Cronos," anchors the film as the kindly, sage physician and is well cast opposite the stately Parades. Noriega gives a dead-on perf as the thoroughly unlikable, but hunky, Jacinto. You know from the start he is a bad guy and Noriega takes that badness to some pretty incredible levels.

The look of the film is also a big plus, especially the eerie ghost F/X of Santi. I don't want to even try to describe them, but the filmmakers utilize a watery grave imagery that haunts me still. Photography, by Guillermo Navarro, is straightforward and does a fine job in giving clarity to the frequent nighttime sequences. Production design by Esther Garcia fits the period bill, with the huge bomb at center stage an imaginative touch.

"The Devil's Backbone" is a unique, haunting tale that tweaks the mind and, at times, sends chills up the spine with its original ghost story, fine acting, deft writing (by Del Toro, Antonio Trashorras and David Munoz) and direction. It is a must for the fans of the horror genre.