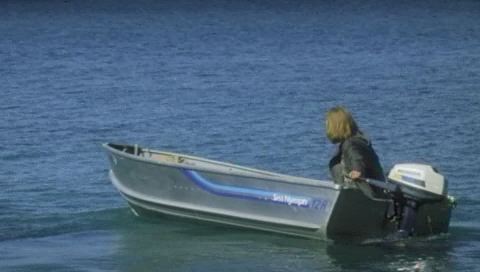 When 17 year old Beau Hall (Jonathan Tucker, "The Virgin Suicides") gets in a car accident after drinking with his 30 year old companion, club owner Darby Reese (Josh Lucas, "Session 9"), his mom, Margaret (Tilda Swinton, "The War Zone") pays Reese a visit to convince him to leave her son alone. Instead, Reese travels out to their Lake Tahoe home and lures Beau out to the boat house where Beau learns that his mother was right about Reese. The next morning Margaret discovers Darby's dead body on their beach and, suspecting the worst, weights it down in a distant part of the lake. But her troubles are just beginning, as she soon learns with the arrival of blackmailer Alek Spera (Goran Visnjic, "Practical Magic") in "The Deep End."

The incredibly pale, red-headed Scottish actress Swinton immerses herself into the role of the reserved American super-mom whose life revolves around serving the needs of her three children and live-in father-in-law Jack (Peter Donat, "The Game"). She shows great strength while allowing other emotions to glimmer through - discomfort at challenging Reese in his gay disco (named The Deep End), near panic at having to dive down to his body to retrieve car keys, or even wry humor when an attempt to get help from Jack becomes hopelessly miscommunicated. Gradually her loneliness becomes apparent (her husband's a naval officer, usually away at sea) when her attempts to email him her concerns about Beau are deleted and later, when a most unusual, yet chaste, romance turns tragic. It's a terrific performance.

The Stendahl Syndrome-like script, adapted from Elisabeth Sanxay Holding's 40's noir novel 'The Blank Wall' by directors Scott McGehee and David Siegel, would be unbelievable if not for Swinton and her costar Visnjic. Alek Spera is a wrong side of the tracks loser who arrives after Reese's body has been discovered. He shows Margaret a videotape of Beau having sex with Reese and demands $50,000 or he'll turn the tape over to the Reno police. Subsequent visits will turn his mind set upside down and backwards, though, as he comes to admire and even love the woman he set out to blackmail. There's yet another problem, though - his partner Nagle (Raymond Barry, "Dead Man Walking") is a harder cored criminal who won't let up until his share of the money is delivered.

Visnjic's dark, brooding turn has an interior shading to it that makes us believe he's a victim of circumstance and environment. His turnaround is palpable as he witnesses Margaret's inherent decency and her workaday surroundings. Also outstanding is Tucker as Beau, who has a terrific character arc and pas de deux with his mother. Initially Beau's the typical sullen teen. 'You're blowing this out of proportion,' he says of her concerns about Reese, not comprehending that his mom has enough insight to have divined the true nature of the relationship. As his mom gets in deeper and deeper trying to cover up a crime he didn't commit, Beau becomes suspicious of her actions and apparent new companion, turning tables. His early black eye becomes her later split lip. While the two can never be completely honest with each other, their love for each other comes through strongly.

The directors ("Suture") have a firm grip on their material and cast. The story builds perfectly with bold strokes amidst a myriad of subtler underpinnings. Water imagery is constant (an early shot of weirdly rushing green is revealed to be a young boy cleaning out an aquarium). Giles Nuttgens ("Fire") cinematography, which won the 2001 Sundance Festival award, is crisp and startlingly clear. The Tahoe locations and production design by Kelly McGehee and Christopher Tandon provide a dual personality for the film, contrasting the calm, well off existence of the lake against the gambling city of Reno.

"The Deep End" is a complex story of domino deeds and shifting relationships. Take the plunge.