The Day I Became a Woman 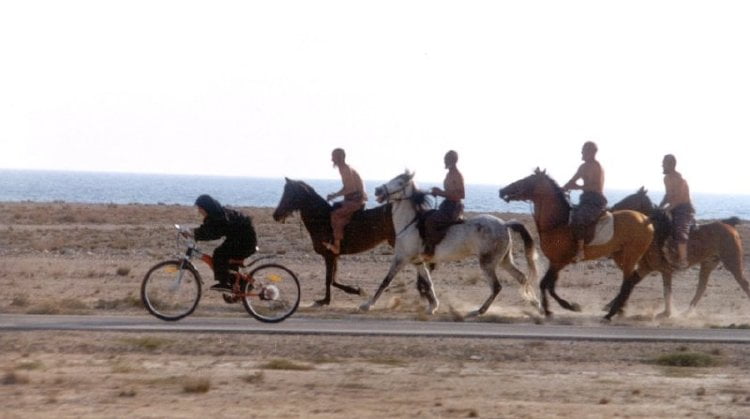 Marzieh Meshkini, the wife and protege of legendary Iranian filmmaker Mohsen Makmalbaf, makes her entry into the world film market with three short stories about being a woman in Iran in "The Day I Became a Woman."

As a thesis project for her husband's Makhmalbaf Film House, Marzieh Meshkini has chosen a triptych written by her husband Mohsen Makhmalbaf ("Gabbeh") which presents the repression of women in Iranian society in "The Day I Became a Woman."

Ahoo (Gazelle, Shabnam Toloui) is in a bicycle race, yet is constantly beseeched by the males of her town to come to her senses and return. Her husband and his lawyer chase after her on horseback and threaten on the spot divorce. Her extended male family next attempts to convince her that her husband still loves her and will take her back. Finally the town elders try evoking the punishment of God himself, yet Ahoo cycles on.

The final story features Houra (Black-eyed Beauty, Azizeh Seddighi), an old woman in a wheelchair who arrives at the airport and hires a young boy (Badr Irouni Nejad) to assist her in buying all the things she's always needed (furniture, appliances) which she surrounds herself with on the beach.

It's clear that this is meant to be a representation of one woman's life, with a raft powered by a sail made from Havva's chador featured in the first and final episodes. Each story features more modern amenities than the previous. The young girl succumbs to tradition after a last blast of freedom. The young wife tries to flee but is finally caught up by men. The old woman attempts to find happiness by ironically embodying the Iranian male concept of a woman as consumer rather than producer.

Meshkini's film, which features different technical credits for each of its segments, uses three different styles quite cohesively. The initial, most simple segment, recalls all Iranian films which deal with children ("The White Balloon," etc.) The second begins to become more stylized, with the black clad female bicyclers strikingly portrayed against the blue sea and blinding sunlight of the Island of Kish. The third is downright surreal, with small boys vacuuming sand and bedrooms set up on the beach. The film is visually stunning although the sound mix is uneven.

"The Day I Became a Woman" is a trio of fables which simply yet evocatively lay out the problems of being a woman in Iran. The filmmaking Makhmalbaf clan have seemingly overcome these problems and produced a new voice in director Meshkini.

Makmalbaf had formed a film school of sorts in his native Iran, attracting family and friends interested in learning the art and craft of filmmaking. His daughter, Samira, made a striking international with "Blackboards." His young wife, Meshkini, provides us with her graduate effort that effects some near brilliant moments coupled with film student intensity.

Part one, "Hava," reps the simplest, most amateur feeling, of the three short tales. This is the story of a little girl who enters, at ripe old age of nine, womanhood. Little Hava is not prepared for this event, which will stop her from playing with her best friend, Hassan, ever more. When she learns that she has one hour before officially becoming a woman, she runs off to steal back the last vestiges of childhood with her boy friend. Before she leaves to find Hassan, Hava's grandma shows her how to use a stick as a sundial to tell her when her time as a child is up. It's a sweet little tale, but the non-actors are called upon to deliver lengthy, meaningful lines and it works only as an academic exercise.

Better is the second tale, "Ha," about a young woman who takes part in a bicycle race - forbidden everywhere in Iran except for the island of Kish. We learn quickly that Ha is racing against her husband's wishes as he pursues her on horseback. The focus is constantly on Ha and the other women, swathed head to toe in black, as her husband and a succession of family, mullahs and village elders ride their horses beside Ha and the racers and shout at her to stop this madness. The visuals are striking and this tale about escape.

The last tale, "Hoora," is about an old women who comes into the big city, hires a boy and entourage of carriers and goes on a shopping spree, buying everything from a refrigerator and washer/dryer to a bedroom set and, even, a tea kettle. She then has the whole kit and caboodle delivered to the beach to be hauled onto a ship. This odd little yarn starts of with light, comic whimsy, but turns to Fellini-esque surrealism, as her booty is set out on the beach, in room-like arrangement, to await transport to a ship. Hoora finally has everything she ever needed as her story draws to a close.

I am a strong proponent for Iranian films these past couple of years and I am always interested to see the crafted film work emerging from that struggling nation. To date, I have not been disappointed. True, every film can't be of the caliber and intensity of such works as "The Color of Paradise" or "A Time for Drunken Horses," but the obvious talents involved in the creation of "The Day I became a Woman" cannot be dispelled. The intense imagery and sometimes-silent story telling are very different from American films and are an interesting challenge for a film buff.