The Dangerous Lives of Altar Boys 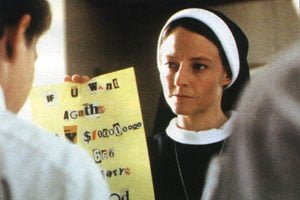 Life for three teenagers spending their formative years in a small town Catholic high school requires faith in God and a sense that "risk leads to greatness" in the 70's based coming-of-age tragicomedy, "The Dangerous Lives of Altar Boys."

'Did He who made the lamb make thee?' William Blake, "The Tiger"

Four Catholic School friends, Francis (Emile Hirsch), Tim (Kieran Culkin, "The Mighty"), Wade (Jake Richardson, "Jay and Silent Bob Strike Back") and Joey (Tyler Long, "The Patriot") escape the perceived tyranny of Sister Assumpta (Jodie Foster) and the varying troubles of their teen lives via their transformation into 'The Atomic Trinity,' a pulp superhero comic drawn by three and edited by the fourth.  A best friendship is tested when Emile begins to spend time with Margie (Jena Malone, "Donnie Darko"), an unusual girl with a shameful secret, and Tim, the son of warring, alcoholic parents, continues to escalate "The Dangerous Lives of Altar Boys."

Based on Chris Fuhrman's cult novel, "The Dangerous Lives of Altar Boys" succeeds on many levels, but is undermined by a climax that cheats.  The film does offer further proof that Kieran Culkin and Jena Malone are fine young actors while serving as a calling card for newcomer Hirsch.

Although no regional accents are employed, the film is set in the small town South of the 1970s where afternoons are idled away riding bikes and clandestinely drinking liquor stolen from dad's cabinet.  Tim is established as the groups's bad influence in the film's initial scene, where Tim and Francis do their triangulation homework by cutting down a telephone pole. Tim's proudest moment is the successful theft of the St. Agatha statue that rests high above the school's entry, but when he begins to lose Francis to Margie his bids for attention get louder.  A field trip to a zoo gives Tim an obsession - capturing its cougar to frighten his teacher.

Video director Peter Care artfully interweaves the animated (by "Spawn's" Todd McFarlane) adventures of The Atomic Trinity vs. Nunzilla, which symbolically mirror reality, with the painful coming of age story, but neither he nor screenwriter Jeff Stockwell can fix a climax which is both cliched and preposterous.  The film isn't shallow, but nor is it deep enough for the weight of its incest, abuse and alcoholism subjects as reflected through the poetry of William Blake.  Individual scenes work better than the impression of the whole.  There's a sense of watching the story unfold with peripheral vision.

Emile Hirsch is the 'cute boy' initially too shy to approach the woman of his dreams.  He's the follower to Tim's lead, the artist to his friend's conductor.  His confused feelings over Margie's revelation are acted with compassionate skill.  Jena Malone creeps under your skin as the young girl who's fresh exterior houses churning self hatred.  Her talent shows a maturity far beyond her years as she balances her neediness with her need for an independent appearance.

Kieran Culkin is immensely touching as the forgotten child crying out for attention.  His reaction to finding a dying dog by the side of the road, which he clearly empathizes with, has strong emotional impact.  He puts just the right spin on the devilish facade which hides a tormented soul.

While Jodie Foster is miscast and adopts an Irish brogue only to abandon it, she gets to the emotional truth of a nun who's viewed as a monster, but cares deeply for her charges.  The air between her and Culkin is positively charged when she passionately reminds him that God sees all and she fears for his soul.  Her seriousness is offset by Vincent D'Onofrio's ("The Cell") delightful turn as Father Casey, the bearded, chain-smoking, largely clueless priest who just barely manages to hid his amusement at the boys' hi jinx and his discomfort in answering their questions.  He's the type of priest one recalls with affection.

"The Dangerous Lives of Altar Boys" has flaws, but it also has humor and heart and very talented young actors.

Kieran Culkin, Jena Malone and Emile Hirsch star as Tim, Margie and Francis, three teens coping with the inevitable changes that they must face as each transition from childhood to adulthood over the course of the school year at St. Agnes High School. The boys, with their buddies Wade (Jake Richardson) and Joey (Tyler Long), are avid action hero comic book fans and have even developed their own, individual action figures to represent each of their persona which the talented Francis puts to paper in his journal.

Tim is the firebrand of the troupe and is the instigator of the many pranks the tiny gaggle of rebels perpetrates on the school, in general, and upon their evil nemesis, Sister Assumptia (Jodie Foster), in particular. Francis is the artist that can transform his friends' imaginary heroes into something palpable and detailed. This artistic vision leads to the beautifully rendered action animation by Todd McFarlane ("Spawn") that parallels, on a fantastic level, the trials and tribulations of the teens trying to cope with the changes that life poses them.

Francis, the more level headed one, is also the more weak willed and will follow his best friend, Tim, regardless of how ill-conceived or stupid the prank. He is only mildly miffed when he learns that Tim has been secret sending poems, under Francis' name, to the pretty object of affection, Margie. As the young couple's budding romance develops, Francis learns Margie's dark secrets and Tim continues to scheme about getting at Sister Assumptia, dubbed Nunzilla by the boys. His plans include stealing the school namesake's statue and an even more hair-brained scheme involving a cougar at the local zoo.

"The Dangerous Lives of Altar Boys" is commercial/music video director Peter Care's debut effort, adapting the novel of life in a small town Catholic school. The helmer does a solid job of showing what it's like growing up under the yoke of the Catholic faith. The repressive, sin-fighting atmosphere of the school, personified by the one-legged, ultra-religious Sister Assumptia (who, though the boys don't know it, really does care for them and their faithless souls), is countered by the rebelliousness of the boys, brought to life in the McFarlane animation sequences.

The over-wrought vengeance against Sister Assumptia is the crux of the film and its weakness. The implausibility of the film's climax undermines the coming-of-age story that is fraught with tragedy and angst. The young stars do a decent job developing their individual character, but the earnestness of the script keeps the three characters at arm's length, never allowing me to embrace their troubles. Jodie is ultra serious as the nun that rep's evil to the boys and plays prominent in their imaginative super hero stories. Vincent D'Onofrio gives the films most natural and believable performances as the clueless Father Casey who, when questioned on the subject of sex, gives a hamana-hamana reply then advises his young wards to "turn to the Lord's prayer for guidance."

Todd McFarlane, creator of the "Spawn" dynasty, is tasked with imagining the super hero stories that fill Francis' journal and does such a good job I wanted to keep the anime action going. The live action and its various stories are paralleled by the fantasy figures as the boys, as their super characters, take on the evil, motorcycle driving nuns.

There is a compelling coming-of-age yarn buried under the histrionics of Chris Furman's story and its adaptation by scribe Jeff Stockwell, but I never got the chance to get my arms around the characters and their plights. There are too many story threads, including one involving a ghost, to be effectively handled. Techs are good (kudos to McFarlane and his animation team) and the young stars convincing.