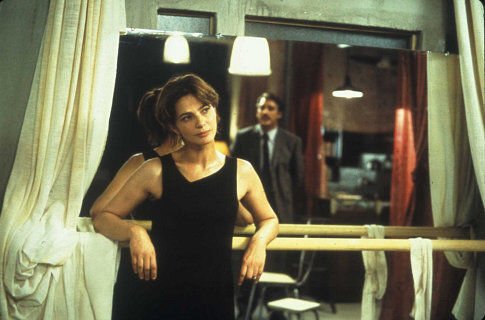 Dogs hanging from lampposts and schoolgirls with firearms are two of the visible signs of the revolutionary guerilla leader who calls himself Ezequiel that South American police detective Rejas (Javier Bardem, "Before Night Falls") is trying to track down. As his investigation leads him into his own past, his present is also becoming consumed by his daughter's ballet instructor, "The Dancer Upstairs."

John Malkovich exhibits a European sensibility in his directorial debut set in an anonymous South American country. The John Le Carre-influenced Nicholas Shakespeare adapted his novel for the screen and while it works as a character study, the love story seems to spring out of nowhere and he saddles Rejas with an entirely implausible wife to support it, without providing their back story.

Introduced in a flashback as a border guard in a remote mountainous area, former lawyer Rejas is struggling to prove himself as a detective in the capital city within the confines of a corrupt government. He has loyalty from his junior partner Sucre (Juan Diego Botto, providing the film's few bits of comic relief) and female colleague Llosa (Elvira Minguez), but is receiving serious pressure from higher ups. He spends his days witnessing horrific poverty and revolutionary terror and his evenings in his modest home watching TV and listening to his wife prattle on about selling cosmetics. When his wife asks him to pick up his daughter at her dance class, Rejas meets Yolanda (Laura Morante, "The Son's Room"), her instructor, and soon he is meeting her again outside the studio. When the strands of Rejas's life become entangled, he'll lose some of his soul to the dancer he desires.

Malkovich cast both Bardem and Morante in their first English language roles because he likes the sound of English being spoken with an accent. His gambit paid off, particularly with Bardem who delivers a fine, restrained performance as an honest man working for the morally corrupt. Morante is quiet and thoughtful, clearly a more intellectual equal for Rejas, but the pairing is more melancholy than romantic. The feeling of loss is necessary, but Bardem and Morante generate no real heat.

Malkovich employs cool tones to his film about oppression in an unnamed place, with editor Mario Battistel effectively intercutting action and composer Alberto Iglesias adding South American flavor. "The Dancer Upstairs" gets at the heart of a man existing amidst turmoil, but while it convinces us that that heart has broken for a country, it doesn't convince at the more personal, romantic level.

The haunting refrain of Nina Simone singing "Who Knows Where the Time Goes" ebb and flow as three people drive to a border checkpoint of an unnamed Latin American country. The sergeant in charge of the barrier follows standard security procedures and photographs the passengers. He sends the strangers on their way, not knowing that he allowed the anarchist leader called Ezequiel (Abel Folk) to enter his country and begin a reign of terror. Now, the sergeant, Agustin Rejas (Javier Bardem), is a high ranking police officer dedicated to apprehending the man who slipped through his fingers years ago in John Malkovich's directorial debut, "The Dancer Upstairs."

Based on the screenplay by Nicholas Shakespeare, from his original novel, helmer Malkovich has crafted an intriguing work that is an interesting story of political machinations in a country so wrought with revolutionary attacks, often on innocent people, that it is on the verge of Marshall Law. Agustin Rejas has spent 12 years of his life hunting down the mysterious Ezechiel, using plain old gumshoe work and tenacity to track his prey. An honest cop, dedicated to his job and his country, Rejas must work within an inherently corrupt system but even he is susceptible to corruption.

During the course of his investigation, Rejas, through his beloved daughter Laura (Marie-Anne Berganza), meets her ballet teacher, Yolanda (Laura Morante), and she is everything his dedicated bourgeois wife, Sylvina (Alexandra Lencastre), is not. Laura is passionate about her country and its people but Rejas will painfully learn that love and politics can intertwine and, for Agustin, shatter his idyllic illusions about his fellow man. This is where the other part of "The Dancer Upstairs" doesn't fare so well as Bardem and Morante never develop the necessary chemistry to give this side of "The Dancer Upstairs" full dimension.

John Malkovich may be a newcomer to the helm but his vast experience as an actor allows him to garner good performances, especially by Javier Bardem, who, when you've ever seem him in person, say, at a press conference, you realize just how fine an actor he really is. Bardem conveys the satisfaction, frustration and the pain of being a policeman, especially in a country racked by inner violence and turmoil.

Malkovich directs with a staid and steady hand and he garners good performances, even from the actors in smaller rolls. The screenplay works more than it doesn't but there isn't the chemistry between the stars I would like to see.