The Curse of the Jade Scorpion 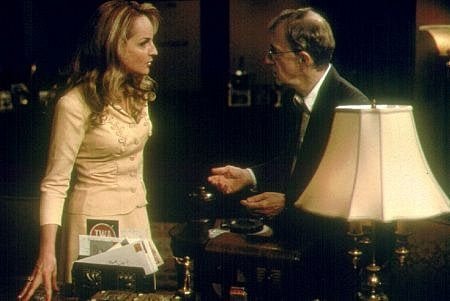 CW Briggs (Woody Allen) believes he's the top insurance investigator in New York City, but the new efficiency expert brought into the firm, Betty Ann Fitzgerald (Helen Hunt) thinks he's a dinosaur. When the two are chosen to be part of a nightclub's hypnotism act, code words will turn them into the criminals they should be investigating in Allen's latest, "The Curse of the Jade Scorpion."

Finally, the Woodman's back in form with his best flick since 1996's "Everyone Says I Love You." Allen, who has a real knack for nostalgic period pieces, has created a sweet mystery.

CW Briggs is a hard boiled, chauvinistic insurance investigator and one of Allen's funniest characters. He goes toe to toe with tough cookie Betty Ann Fitzgerald, who delivers some of the sassiest insults ever to be volleyed in a battle of the sexes. Betty Ann has a secret that makes her appear suspicious to Briggs, but when revealed, uncovers her vulnerability.

When Briggs gets a late night call from Voltan (David Ogden Stiers, "Everyone Says I Love You") whispering "Constantinople," he robs the wealthy Kensingtons, stashes the jewels in his bedroom and has no memory of it. Investigating the next day, he meets spoiled Kensington daughter Laura, (Charlize Theron) the type of gal who swims in fountains and drives fast cars. She's turned on because he's different ('I find it strangely exciting standing here in this grungy hovel with a myopic insurance investigator,' she purrs when visiting his apartment). When Briggs leaves her in his bed to heed another of Voltan's calls, Laura finds his behavior suspicious. Briggs discovers that his boss Magruder (Dan Aykroyd) has taken on Coopersmith detectives who've interviewed Laura and that he's now a suspect! As much as Betty Ann presumably hates Briggs, she doesn't believe he's a crook, but when he's put away, Voltan uses her code word 'Madagascar.'

Beautifully shot in a golden glow by cinematographer Zhao Fei ("Raise the Red Lantern," "Sweet and Lowdown"), "The Curse of the Jade Scorpion" has both the look and feel of a 40's film. Allen's plot is like a loving restoration of a caper from a more innocent time. His interweaving suspicions and code words ('Paris' is used by the married Magruder to convey sweet nothings to his mistress Betty Ann in mixed company) snake throughout his screenplay masterfully. Allen's impeccable choice of music includes recordings of Duke Ellington's "Sophisticated Lady" and Glenn Miller's "Sunrise Serenade."

"The Curse of the Jade Scorpion" is a solid mid-range effort from the prolific writer/director that's a delight from start to finish.

C.W. Briggs (Woody Allen) is the top investigator at the North Coast Fidelity and Casualty Insurance Company. His old school manner conflicts with the modern business ideas of newly hired efficiency expert Betty Ann Fitzgerald (Helen Hunt) and the two butt heads constantly. When, during a coworker's birthday party, a mystic named Voltan (David Ogden Stiers) chooses the two as his subjects, the hypnotic suggestion he gives them turns out to be more than just a parlor trick in Woody Allen's latest flick, "The Curse of the Jade Scorpion."

The Woodman has, for a number of his later films, reached a nadir in his filmmaking career, especially when compared to those of his heyday like "Annie Hall" and "Manhattan." His more recent films, like "Shadow and Fog" and "Celebrity" were almost painful to watch - if you could stand to watch them at all. He made up some lost ground with "Sweet and Lowdown," mainly through the efforts of the film's star, Sean Penn. The problem, I have found, is the diminished quality of the writing by Allen, himself. Even in his "funny" films there is a lack of pith when compared to his earlier works.

"The Curse of the Jade Scorpion" reps a partial return to Woody's old style, but, in the end, it's the lack of depth and less than sparkling humor that keeps his latest work on the middle ground of his long career. Sure, there are the one-liners that are a throwback to his old ways - C.W. "How'd you like it if I hit you?" Tough rich chick Laura Kensington (Charlize Theron) "How would you like it if I hit you back?" C.W. "Now that's beginning to sound like fun." - but they certainly are not on a par with his best work.

That's not to say that "The Curse of the Jade Scorpion" isn't fun. Woody Allen is one of America's great filmmakers; he just doesn't produce the great works he used to. Still, for late summer entertainment, it is a pleasure to watch Allen play the quasi-hardboiled insurance investigator, Briggs, as he uses old-fashioned instinct, gumshoe work, snitches and informants to break one tough case after another. The modernity of 1940, though, spells change for C.W.'s company when his boss, Chris Magruder (Dan Aykroyd), hires Betty Ann Fitzgerald to shake things up and make the place more efficient. Betty Ann thinks C.W. is a dinosaur in the business and he thinks she is something that rhymes with "witch." The pair are always at odds over how to run the business and are constantly bickering.

When Voltan, at their comrade George's birthday party at a local nightclub, puts C.W. and Betty Ann under his spell and gives each a hypnotic suggestion - the trigger words are Constantinople for him and Madagascar for her - he tells them that they are madly in love with each other. It's great fun for all, except for Magruder, who is having a clandestine affair with his efficiency expert. Later, when Briggs is alone, he gets a mysterious phone call that leads off with the word "Constantinople." It's Voltan on the other end of the line and the mystic instructs C.W., now under his spell, to break in to a wealthy clients home and steal every jewel he can find. Of course, the next day the unwitting Briggs is ordered to investigate the burglary and declares it an inside job.

When another rich client is burgled, Betty Ann decides to outsource the investigation and brings in a pair of bumbling private eyes, Joe and Herb Coopersmith (Peter Linari and Michael Mulheren), to solve the case, but not before Voltan strikes again. Now, it's up to C.W. and Betty Ann, with the help of their coworkers, to crack the crimes and clear Briggs's name.

Woody Allen, of late, doesn't delve far beyond his main characters in story structure. His concentration is on the focal folks and he doesn't spend much time developing or fleshing out any ancillary individuals around the main characters. This is true with "The Curse of the Jade Scorpion," but it is, still, an amusing little flick. My real problem lay between the two lead characters. I never got the feeling that there would ever be an attraction between C.W. and Betty Ann, so this required a real leap of faith for me. Putting that aside, the adversarial conflict between the two has the most punch in the film as Allen and Hunt play a couple of people who love to hate each other.

Supporting cast is well rounded though no one is given a great deal to do. David Ogden Stiers, as Voltan, gets to put a malevolent spin on his con artist character. Charlize Theron, as the wealthy and caustic Laura, is introduced as a Veronica Lake look-alike and puts a tough spin on her character. If anything, Theron is underutilized in a role that she seems to relish. Dan Aykroyd has proven himself to be an effective character actor in the past and continues this track record as sleazy boss man Magruder. Wallace Shawn and Brian Markinson, as C.W.'s coworkers, aren't given much to do.

Techs are as expected in a Woody Allen film. Zhao Fei has lensed the last several Allen films and works to keep the look consistent with the maker's earlier efforts, but, boy, do I miss Gordon Willis behind the camera. Costume designer Suzanne McCabe helps capture the look of the 40's and longtime Allen collaborator Santo Loquasto does a solid job on the period production design. Music, as one expects in a Woody Allen film, is perfect with its mix of big band swing and combo jazz from the era.

One always hopes that Woody is going to produce another masterpiece like "Manhattan." We don't get it with "The Curse of the Jade Scorpion," but we do get a solid middlin' film from the guy.