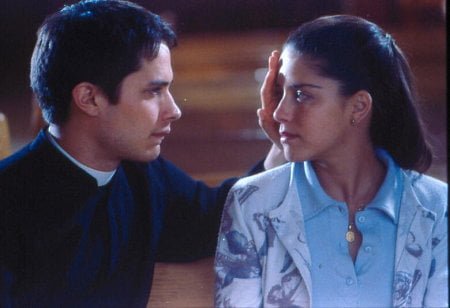 Fresh out of the seminary, Father Amaro (Gael Garcia Bernal, "Y Tu Mama Tambien") is sent to the small town of Los Reyes to assist the aging Father Benito (Sancho Gracia) - or is he? The young priest's eyes are immediately flung open when he witnesses Sanjuanera (Angelica Aragon, "A Walk in the Clouds"), their cook, leaving Benito's bedroom in the middle of the night. When Benito accuses Father Natalio (Damian Alcazar, "Highway Patrolman") of aiding guerillas, Natalio retorts with accusations of money laundering for the local drug lord. Then bishop (Ernesto Gomez Cruz) utilizes the pliant young priest for his political maneuvering, but will he overlook "The Crime of Father Amaro?"

Or should that title be the crimes of Father Amaro? Carlos Carrera's pot boiler, adapted from an 1875 novel by screenwriter Vicente Lenero, is long on licentiousness and short on subtlety. While the grey shadings of Benito's character are interesting, Amaro is given no arc - he simply leaps off one.

We're introduced to Amaro on a bus that's robbed, perhaps by Natalio's guerillas, on the way to Los Reyes. In a kind-hearted gesture, he gives the money he has to his older seatmate, who has just lost everything. As he walks into his new parish, he asks the gorgeous young and virginal Catechism teacher, Amelia (Ana Claudia Talacon), for Benito's whereabouts and she practically melts with lust at the sight of him. In no time flat, her fiance becomes a pariah for trying to expose church corruption in the newspaper and Amaro's having his way with her, under cover of a severely disabled young woman named Getsemani(!) and a laughable story about preparing her for nunhood. Benito, feeling guilty, shuns Sanjuanera, Amelia's mother, but continues to consort with the drug lord for the profits it brings his clinic. Even Natalio, who is righteous, sides with people who resort to murder in furthering their cause.

While Amaro goes from saint to sinner in short order (his one good quality, besides his drop-dead good looks, is his feeble attempt to stick up for Natalio), he's not the only character who's actions are questionable. Amelia is presented as the most virtuous of young girls, yet she practically licks the confessional screen Amaro is seated behind. Dionisia (Luisa Huertas, "The Mask of Zorro"), the town wacko, takes great delight in exposing heretics, yet procures an abortionist for a priest? That old man from the film's first scene reappears later on to remind Amaro how kind he was in circumstances that show him as less than upstanding.

Bernal, who in the three films that have been released in the states is always screwing the wrong person, can't provide the shadings of character the script doesn't give him. The film's strongest performance comes from Alcazar, who shows strong character in the face of injustice. Also good are Aragon, acting as a common law wife despite Benito's last minute objections and Huertas as the crone who is Amaro's harbinger of doom.

"The Crime of Father Amaro" is thoughtful when it focuses on the corruption of power, but the heavy handling of its titular character turns him into a Catholic "Mandingo" crossed with "Rosemary's Baby's" Guy Woodhouse.

Newly ordained Father Amaro (Gael Garcia Bernal) is the favorite of his Bishop but must, like all priests, pay his cleric's dues. He is assigned to a small, remote rural parish under the tutelage of Father Benito (Sancho Gracia) but the seemingly quiet locale is seething with controversies of illicit love, drug trafficking, corruption, money laundering and more in "The Crime of Father Amaro."

The "and more" in the above opening is the problem with this pot-boiling soap opera of a story that simply tries to do too much and doesn't give enough depth to any of its threads in this very involved effort by Mexican director Carlos Carrera. The poignant tale of personal and professional moral corruption within the Catholic Church in modern day Mexico is actually based on the 1875 novel by Portuguese writer Jose Maria Eca de Queiroz and transplants the book's action to the New World.

Young father Amaro arrives at his new station in the small town of Los Reyes to assist Father Benito in the day to day affairs of the parish while the older priest supervises the building of his dream - a hospital and orphanage for the poor. Amaro is also under instruction to keep in contact with his Bishop (Ernesto Gomez Cruz), particularly about a self-minded, strong-willed priest named Father Natalio (Damien Alcazar) who supposedly has connections with armed, rebellious anarchists. The young cleric also meets and catches the eye of pretty teenager, Amelia (Ana Claudia Talancon), who decides that Amaro is the one for her and dumps her journalist boyfriend, Ruben (Andres Montiel).

As the story unfolds we learn that Father Benito is realizing his dream on money he willing launders for local drug lord, Don Chato Aguilar (Juan Ignacio Aranda), with the assistance of the town mayor and his wife. The good father believes that the end justifies the means and that he is making bad money into good money. We also learn that Benito is having a lusty affair with the owner of a local restaurant. Sanjuanera (Angelica Aragon), who has been the priest's concubine for years, is also the mother of Amelia, who in turn has pressed forward to jump Father Amaro's bones. In the meantime, the Bishop is using Amaro as the conduit to Father Natalio to castigate the worker-priest for his rebel leanings, threatening excommunication as punishment. There are other currents flowing through this complicated tale, too, including Ruben and his journalistic revenge against the Church and Amaro, in particular, for taking Amelia from him.

This complex tale of lust and corruption suffers from not enough time given to each of the pieces, even with a two hour run time. The main story is, of course, about the title character and focuses on his (quite readily) tossing aside of his vows to indulge in sins of the flesh with Amelia. Unfortunately, the good-looking pair is given a predictable and routine story thread that exhibits their lust but lacks any surprise. Bernal is handsome, polite and attentive as Amaro, who is really just a coward to his convictions, and it's not a stretch that lustful Amelia would fall for him. After all, shacking up with the local padre seems to be a family tradition. The young actors acquit themselves well enough but Bernal gave a more compelling performance in "Amoras Peros."

The rest of the cast is first rate and they do a decent job in fleshing out the sketchily drawn characters. My favorite is Damien Alcazar's Father Natalio, probably the only honest player in the lot who sees working shoulder to shoulder with the people as the way to do God's work. This honesty makes him a convenient scapegoat for the Bishop who needs to divert attention from the scandal the newspapers drag up about Father Benito and his shady dealings. Sancho Gracia does his best with the character of Father Benito but the script, by Vincent Lenero, leaves him dangling in the wind. The most over-the-top performance is provided by Luisa Huertas as crazy lady Dionisia who, due to the script, loses focus by the end of the film but she does a fun job of chewing the scenery along the way.

Production values are high quality as befits the biggest grossing Mexican film of all times in of all places, Mexico. It is even that country's entry for Best Foreign Language Film entry for the Oscars. Guillermo Granillo's lensing is crisp and bathes the young couple's romance in soft warm lighting. The rest of the production is equally well handled.

If you're of a mind to see a Mexican soap opera that is also a timely indictment against corruption within the Catholic Church then "The Crime of Father Amaro" is the film for you. To me, it tries to do far too much in the allotted time.