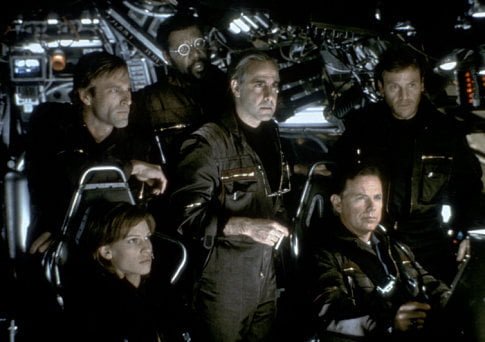 Suddenly, for reasons unknown, the Earth's molten core has stopped rotating. Almost instantly, strange phenomenon begin happening around the world. In Boston, 32 people wearing cardiac pacemakers drop dead at the same moment. In London, tens of thousands of pigeons can no longer navigate causing panic and hundreds of accidents as they slam into people, cars and shop windows. Other similarly bizarre incidents are occurring all around the world. Geophysicist Josh Keyes (Aaron Eckhart) and a talented team answer the government's call to burrow to the center of the Earth and use nuclear bombs to jumpstart "The Core."

When 32 pacemaker wearers drop dead in Boston and misguided pigeons wreck havoc in London's Tralfalgar Square Geophysicist Dr. Josh Keyes (Aaron Eckhart, "Possession") forms a theory that a problem with the earth's electromagnetic field, formed by the rotation of the earth's core, is causing the peculiar events. His theory is stolen and confirmed by a world famous colleague, Dr. Conrad Zimsky (Stanley Tucci, "Maid in Manhattan"), and the U.S. Government forms a team of specialists that will travel to the center of the earth to jump start "The Core."

This unintentionally hilarious effort that would have done disaster producer Irwin Allen proud in the 1970's is "Armageddon" meets "Independence Day" by way of "Journey to the Center of the Earth." A fine and good-natured cast paired with cheesy special effects make "The Core" one of those bad movies that attain a level of accidental entertainment.

With Keyes positioned as unlikely hero and Zimsky cast in the Dr. Jonathan Smith over-emoting bad guy role, the rest of the crew fall in efficiently, summoned by General Thomas 'how could this have happened?' Purcell (Richard Jenkins, "Changing Lanes"). Tcheky Karyo ("La Femme Nikita") is Dr. Sergei Leveque, a French atomic Weapons expert who happens to be Keyes's best friend. Major Rebecca "Beck" Childs (Hilary Swank, "Insomnia") is a rookie astronaut responsible for navigating the shuttle into an emergency landing in the Los Angeles River after going disastrously off course during reentry. She's accompanied by her Commander Robert Iverson (Bruce Greenwood, "Thirteen Days") who marks his days as numbered when he advises her 'You're not a leader until you've lost.' Dr. Ed "Braz" Brazzelton (Delroy Lindo, "Heist") is a former colleague of Zimsky's who allowed him to steal glory while he continued to develop new metal alloy that could withstand the earth's pressure. He's tasked with building their subterranean boring craft, Virgil, as the rest train and electrical superstorms pulverize the Roman Coliseum into a shower of computer graphics and the sun's rays melt cars on the Golden Gate bridge but only burn the humans inside if they put their arms out the window.

Director Jon Amiel ("Entrapment") slows the pace considerably, to the film's major detriment, as Virgil begins boring its way to the core from beneath the sea. One by one, the terranauts are killed by various disasters until their mission to nuke the core is abandoned for a second plan by mission control. Except for above ground team member, computer hacker extraordinaire Rat (D.J. Qualls, "Road Trip") (working for "Xena" tapes and unlimited Hot Pockets), the terranauts are on their own.

Writers co-producer Cooper Layne, who got this idea watching lava flow from a Hawaiian volcano and former standup John Rogers invest their story with such cliched comic highlights as having the shuttle slide down the dry LA river right up to scaffolding where an unsuspecting worker plugs away. Chain-smoking, scarf wearing Zimsky is an inspired creation, and one only awaits Tucci to wail 'Oh, the pain' at his climatic moment. Visual Effects Supervisor Gregory L. McMurry ("Queen of the Damned") employs thirty foot crystals within a geode that casts the terranauts in unnatural light and a free-falling Virgil as realistic as anything in 1966's "Fantastic Voyage." Composer Christopher Young's ("Bandits") score alternates from moody to "Mystery Science Theater Two Thousand."

If in space, nothing will hear you scream, "The Core" reverberates with howls of laughter.

Famed blockbuster filmmaker Irwin Allen would be pleased as punch to see that his tradition of big, loud action flicks that pits man against nature-induced disaster, such as "The Poseidon Adventure" and "The Towering Inferno," is still alive. "The Core" brings back the tone and mood of those pictures with its incredible concepts and ideas that are so lovingly rendered by their makers you willingly suspend your disbelief as the action unfolds.

First and foremost, "The Core" benefits from the talents of its veteran ensemble cast. None of the actors would be considered A-list, including Oscar-winner Hilary Swank, but they are all top caliber talent. Aaron Eckhart makes his young scientist Josh Keyes convincingly appear as the kind of guy that literally understands what makes the world go 'round and has the chops to be the first among equals with the rest of the team. And, this team is a tight, capable one, too.

The "terranauts," as they are dubbed (I, personally, prefer the moniker "dirtronauts" coined on an old episode of "The Dick Van Dyke Show"), must head a crash program to get to the core of the Earth and unleash an enormous nuclear blast to force the spin back into things. But first, they must find a way to drill down thousands of miles to plant the blast. Enter Dr. Ed "Braz" Brazzleton (Delroy Lindo), a renegade scientist who has invented an indestructible alloy he calls "unobtainium" and it is the very metal that can do the job. The inner-space ship "Virgil" is spawned in short order.

The production is a mix of "Independence Day," "Armageddon" and the aforementioned Irwin Allen films as the earth-ship Virgil is constructed at breakneck speed before the Earth stops spinning, the electromagnetic field collapses and the unprotected world is incinerated from the bombardment of space-born microwaves. Since there is surprisingly little real information about what lay below the Earth's mantle, scripters Cooper Layne and John Rogers take many liberties with science and keep things moving briskly with both drama and humor.

As things get underway and the journey to the center of the Earth begins, we are, first, brought along on the amusement park ride as the valiant crew burrows through the crust and into the future of the world. But, as in any good saving-the-world-from-disaster movie, things have got to go wrong and, one by one, the crewmembers fall victim to the rigors and dangers of the mission. It is a Rube Goldberg machine of a plot, something I like to call "kitchen sink sci-fi" where you only have to wait a minute for the next wrench to be thrown into the works.

Production design, by Philip Harrison, has all the high-tech bells and whistles to entertain. Cinematographer John Lindley keeps it tight and focused on the action and works well with the visual effects (supervised by Gregory L. McMurray). The F/X explore one set of perceptions as to what it would be like to drill into the Earth's core. The only other inner-space movie I can think of, the 1959 Jules Verne story "Journey to the Center of the Earth", was a fantasy trek involving dangers, dinosaurs and the lost city of Atlantis. "The Core," at least, hangs its hat on scientific facts and theories, even if the filmmakers take liberties in favor of the story.

"The Core" isn't going to enter the pantheon of great science fiction film, but it certainly should make Irwin Allen proud. The superb ensemble cast helps make it a decent bit of late winter escapism.