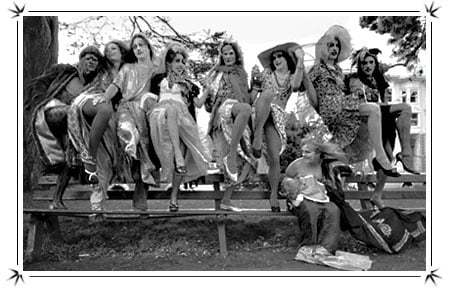 1969, Haight Ashbury. As free love and flower powered reigned in the streets of San Francisco, gay culture began to take hold of the city. The dreams of a man called Hibiscus, the harbinger of the glitter movement, to present free artistic performances gave birth to a short-lived but highly influential theater troupe known as "The Cockettes."

Directors David Weissman and Bill Weber discovered common bonds, including a fascination for this legendary underground group. Having never made a documentary before, the duo set out to contact the remaining members of the group (many had died of drug overdoses and A.I.D.s). Cockette Martin Worman, who died in 1993, had begun a PhD dissertation on the group and his partner turned over a treasure trove of archival footage and stills to the filmmakers.

The structure of the documentary follows the standard rise and fall of a 'star' who began with the best of intentions but became corrupted by outside influences. But this star was about so much more than show business. "The Cockettes" documents the hippy principles and sexual revolution of the day, the newfound identity of a city and the deep wedge that divides the West Coast outlook and lifestyle from its Eastern counterpart.

Memory lapses divide recollections as to whether The Cockettes performed their first show at the Palace Theater on Halloween or New Year's Eve. This group of gay men, straight women and the children they produced were joyfully uninhibited amateurs with a theatrical flair that laid the groundwork for glitter rock and "The Rocky Horror Show." Filmmaker John Waters, a San Francisco resident at the time, was a fan who pitched in sewing sequins.

The group evolved from unstructured revues to suggestive productions like "The Pearls of Shanghai" and films like "Elevator Girls in Bondage." Their most notorious production was the parody film "Tricia's Wedding," which was denounced by the Nixon White House. After ecstatic reviews from the likes of Truman Capote and Rex Reed, "The Cockettes" traveled to the Big Apple, but their innocent exuberance puzzled the city sophisticates and they flopped. As individual members began to emerge as personalities in their own right (Sylvester became a disco star, Hibiscus became a soap star under his real name of George Harris) and Marxist ideals lost their luster in the face of economic realities, the group disbanded in 1972.

Weissman and Weber take a great subject and do it justice, having been blessed by decades old footage that looks so crisp it is difficult to believe one is watching the real thing and not a reenactment. Ironically, the Haight Ashbury answer to Andy Warhol's Factory was done in by what made it different. The group deserves to be every bit as well know, though, and "The Cockettes" is the microcosm of a culture entertainingly tied up in a ninety minute package.

"The Cockettes" is a detailed, affectionate look into a short-lived phenomenon (though popular on its home turf in San Francisco) that uniquely combined gay cabaret with the free love mentality of the hippie subculture of the late 60's and early 70's.

This story of the evolution of a troupe of amateur street performers that attain cult status on a national level is a richly documented tome that benefits from the copious film footage from the Cockettes' earliest days. Documentary filmmakers Bill Weber and David Weissman utilize the wealth of archival footage and talking head interviews with former members of the troupe to give us a sense of the unabashed idealism the amateur troupe lived by in their heyday.

The flamboyant founder and leader of the transvestite theatre troupe, Hibiscus (nee George Harris), was a visionary who saw a place in San Francisco culture for the gang of gender-bending street performers. They were amateur, for sure, but their unbridled zeal to perform, despite the sometimes obvious lack of talent, made them a fixture in the hilly city's counter-culture society.

The remembrances of the still-living members of the Cockettes, combined with the volumes of film footage from their performances, gives a rich insight into the workings of the group, their political temperament and their outrageous sexually oriented cabaret performances. They wore their amateur status on their collected sleeves and would pretty much do anything for fun and the shock factor.

The troupe had a strong enough following in San Francisco to get them national attention. They moved to Off Broadway and were greeted with enthusiasm by the NYC intelligentsia - until they performed their amateur theater. The sophisticates of Manhattan rejected the Cockettes as unrefined and amateur but, during their three-week sojourn to the Big Apple, they developed an underground cult following akin to their SF fans.

The bawdy subject matter and interviews with the sometimes-bizarre former members of the troupe may not hold a great deal of appeal to the mainstream filmgoer. But, for those of you looking for a bit of offbeat nostalgia and a well-rounded glimpse into counterculture Americana, "The Cockettes " may be your cup of herbal tea