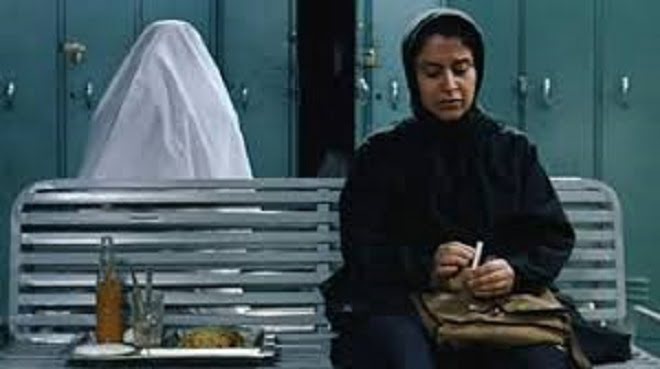 As credits roll over a black screen, we hear the sounds of childbirth. A white room appears where a white window is slid open on a white door by a white garbed nurse. A black clad grandmother inquires about her daughter's baby. 'It's a girl,' she's told. Hoping for better news, the grandmother tells another member of the hospital staff she hasn't been told the sex of her grandchild. When she receives the news a second time, she despairs that the in-laws will be furious. Director Jafar Panahi ("The White Balloon") continues to make his point about the lives of Iranian women by crossing over multiple storylines in "The Circle."

As another female family member rushes down the hospital's spiral staircase to the street, she crosses paths with Nargess (Nargess Mamizadeh), Arezou (Maryiam Palvin Almani) and a third woman attempting to make a public phone call. When a man asks 'You two alone?' as he passes, the third friend demands an apology, creating a street incident which results in her arrest. Arezou and Nargess watch from a hiding place as they are already on the run. We learn that they've been released from prison, although never their crime. Arezou is afraid that her son couldn't handle seeing her after two years, while Nargess, only eighteen, just dreams of reaching Sarab, an edenic part of Iran where she'll reunite with her brother. They're also trying to reach a friend, Pari, for help.

Arezou insists Nargess take their money for the journey and vanishes. After dealing with all sorts of problems obtaining a ticket as a woman alone, Nargess takes five minutes to buy her brother a gift, but must flee when she sees police checking passengers getting on the bus. She finally finds Pari's house, but is told off by a male family member. As Nargess runs down the alley and out of the film, Pari (Fereshteh Sadr Orfani) sneaks out of her front door while her brother and father argue over her fate.

Pari visits a female friend (Monir Arab) selling tickets at a movie theater and we soon discover that these two also have been imprisoned. Pari's friend's husband obtained a second wife while she was jailed, yet she's comfortable with the idea and the second wife arrives and drives Pari to meet with another friend, an emergency room nurse (Elham Saboktakin). Pari is in dire straits as she's pregnant, but her friend, married to a doctor at the hospital, is too fearful of his reaction to help.

Pari walks the streets and sees a mother with a well dressed little girl as she enters a hotel lobby. When she exits, the little girl is crying, abandoned. Pari finds the mother (Fatemeh Naghavi) distraught, watching the scene from behind a car (reminding us of Arezou and Nargess earlier). She's trying to make a better life for her daughter, but always fails to really leave. This time she succeeds and cinematographer Bahram Badakshani's camera follows her as she says farewell to Pari and accepts a ride from a male stranger, a move that causes her to be pulled over at a roadblock where another woman (Mojgan Faramarzi), clearly a prostitute, is already being held. As this last woman is processed into prison, Panahi ironically suggests she may be the only free woman in his story.

Director/editor Jafar Panahi's Venice 2000 Golden Lion winner is a powerful statement about the oppression of women in Iran (banned within its own country), yet also celebrates their sisterhood. Panahi and writer Kambuzia Partovi suggest strong themes with such simple devices as unlit cigarettes. Their failure to tell us what these women have been jailed for strengthens the story because as we witness the difficulty being a woman in Iran brings to such simple tasks as buying a bus ticket, we realize that whatever their transgressions are, they would be viewed as trivial in Western society.

Cinematographer Bahram Badakshani employs a very fluid camera style as he tails his subjects through city streets. He and director Panahi visually reinforce the circular nature of the film with spiral staircases and round balconies. Badakshani captures many striking images, such as Nargess running through a terminal, billowing black and clutching a shirt box or an old balloon seller holding the hand of a tearful little girl as a wedding party streams by.

The women of "The Circle" will break your heart while opening your eyes to their plight.

In a nation where a woman cannot even buy a bus ticket without her husband's permission or smoke a cigarette in public, much less obtain an abortion, director Jafar Panahi delves into the lives of women on the wrong side of the law in Iran in "The Circle."

From the very start of "The Circle" we are thrust into the alien, male-dominated society of Iran that treats its women as possessions, not people. An old woman stands outside the small door to a hospital maternity ward. The door slides opens and a nurse tells her that her daughter has had a beautiful baby girl. The door slides shut. Obviously agitated, the woman knocks at the door and asks another nurse about the baby's sex. Again, "it's an adorable girl," she is told. "They'll want a divorce!" she moans about her in-laws as she dejectedly leaves the hospital.

This extended scene of despair summarizes the film's theme of the harsh life for women, especially an ex-convict, in Iran. The old woman's misery is just the lead into one of the most powerful, thought-provoking and eye-opening films to come to the screen this year. Iran's Islamic society stridently keeps women in a second-class, subservient role where the men running the country define a woman's "rights". Conditions, from a western viewpoint, are severe, at best, for the average Iranian woman. Panahi's "circle" of women is an even more harshly treated subgroup - the sisterhood of women who served time in Iranian prison.

As the old woman leaves the hospital, she crosses paths with three younger women, dressed head to toe in the black robes and the ever-ready chador required by Islamic law. There is something wrong as they try to make a phone call to a friend who can help get tickets for the three to flee the city, hopefully to a place where the air is not so oppressive. But, no one answers the phone. Desperate for money, one of them takes their one valuable possession, a slender gold necklace, and tries to sell it on the street. A scuffle ensues and she (though not the men she tries to sell the trinket to) is arrested, as her friends look on helpless to intervene.

Arezou (Maryiam Parvin Almani) and Nargess (Nargess Mamizadeh) now must fend for themselves. The older Arezou takes the little money they have and gets Nargess onto a bus that she hopes will bring her young friend back to the wonderful world of her childhood. It doesn't and Nargess must seek out another convict, Pari (Fereshteh Sadr Orafai), for help. The story shifts to Pari, who has her own set of problems. She's a prison escapee, single and pregnant, not a safe combination for a woman and Pari goes to another prison sister for assistance. The story then weaves in a heart rendering tale about a pretty little girl, dressed in her best clothes, abandoned by her unwed mother (Fatemah Naghavi) in hopes that she'll be taken by good and kind people.

The end of the film bookends the beginning with another small door sliding shut. The finality of this action closes out a story that leaves you pondering just how it would feel to live under such repression, always fearful and always vulnerable. It's a story about a man's world shown from the woman's view and it's not an appealing picture of life in Iran. But, it is a beautifully made film by the maker of the wonderful childhood story, "The White Balloon," showing Panahi's deft versatility as a world-class filmmaker.

The cinema verite-style camerawork helps carry forward the tension these women live with, day to day, as they strive to survive and stay out of prison - and it doesn't take much to get sent to prison. The look of the film, coupled with the natural efforts by the actresses, makes it feel real, almost documentary-like, and brings us to see a very different social order. "The Circle" is a powerhouse of a film.