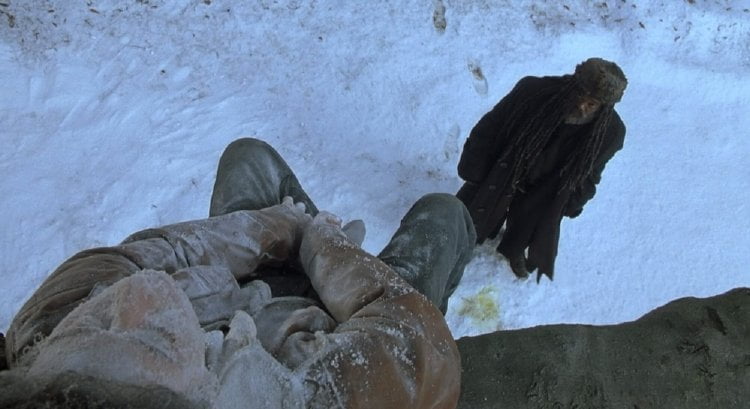 Romulus Ledbetter was a Julliard-trained classical musician and a devoted family man who lost his mind. He now lives in a cave on the edge of Manhattan and is haunted by a delusional enemy, Cornelius Gould Stuyvesant, who manipulates Rom's life from atop the Chrysler building. But, when Ledbetter finds a frozen corpse outside his home, he must put aside his dementia and solve the murder in "The Caveman's Valentine."

Romulus Ledbetter (Samuel L. Jackson) is a homeless man who lives in a cave in Central Park. The former Julliard-trained pianist/composer's descent into madness cost him his home, wife and (now adult) child. Now he spends his days trying to thwart his nemesis, Cornelius Gould Stuyvesant, whom he believes tracks him from atop the Chrysler Building. When Romulus finds a frozen body in the tree outside his cave, he summons his police officer daughter and tries to convince her superior that the victim was murdered by Stuyvesant in "The Caveman's Valentine."

Adapted from his own Edgar winning novel by George Dawes Green, "The Caveman's Valentine" is a most unusual murder mystery. Because the audience receives its point of view from Romulus, the perspective is always off kilter. We see Romulus' delusions, such as his estranged wife (Tamara Tunie) acting as a sounding board, which other characters in the film do not see.

Romulus has seen a message for help on a large ad for the work of David Leppenraub (Colm Feore, "Titus"), a Mapplethorpe-like photographer who has some nasty rumors circulating involving torture, drugs and death. As the victim was Leppenraub's last model, Romulus switches his suspicions from Stuyvesant to Leppenraub, arranging to reenter society to get close to the man.

Director Kasi Lemmons ("Eve's Bayou") was smart to choose to work once again with Jackson, as his acting is the most compelling aspect of the film. He lumbers about like a Rastafarian bear in Central Park. Ledbetter is fearless except when he perceives Stuyvesant's rays emanating from the Chrysler, confident in his convictions except when he attempts to pass himself off as the man he used to be.

Anthony Michael Hall ("Sixteen Candles") is the New York financier who supplies Romulus with the trappings of his former life in exchange for party tricks. Ann Magnuson ("Love and Sex") is Moira, Leppenraub's spirited but dependent sister who takes Romulus as a lover while he's investigating her brother. Feore gives his character an appropriately enigmatic threatening quality.

While the actors, music, locations and art direction all feel right, the story is too muddled to make the film a total success. We're never given enough backstory on Romulus' family to understand his wife and daughter's extremely negative reactions. The film's conclusion wraps everything up too hurriedly, with the protagonist suddenly dispensing numerous facts which the audience hasn't been privy to. The whole Stuyvesant concept never really goes anywhere.

While Lemmons's film is uneven, it's still a unique piece of work by an inventive filmmaker willing to take risks. That coupled with Jackson's masterful lead performance make "The Caveman's Valentine" more worthwhile than most of the Hollywood mainstream product in theaters now.

Kasi Lemmons, an accomplished actress and screenwriter, made quite a splash with her debut-directing job, "Eve's Bayou," which was the highest grossing independent film of 1997. With "The Caveman's Valentine," she uses George Dawes Green's adaptation of his own novel to unfold a murder mystery with Romulus as a very unlikely homicide detective.

The murder story enveloping Romulus involves a handsome young drifter, Scotty Gates (Sean MacMahon), found dead atop a tree outside of the old schizophrenic's cave. When the police, including Rom's cop daughter Lulu (Aunjanue Ellis), dismiss the transient's death, the former music master must piece the clues together alone. He becomes convinced that a prominent Manhattan art photographer, David Leppenraub (Colm Feore), is the murderer. But, who is going to believe the ranting of a crazy man living in a cave?

The brightest point of "The Caveman's Valentine" is the terrific character depiction of Romulus Ledbetter by Samuel L. Jackson. In his last three outings he has played a bad ass private dick in "Shaft," a physically handicapped mass murderer in search of a hero in "Unbreakable," and, in "The Caveman's Valentine" a mentally broken artiste who must put aside his dementia to solve a murder. The actor puts a completely different spin on each of his characters and Romulus Ledbetter is no exception. Topped with a head full of dreadlocks and attired in layers of dirty clothing, Ledbetter is a raving, hallucinating nutcase who is brought back to the sane world, at least for a little while, to solve the murder placed on his doorstep. Jackson, as usual, creates a real, three-dimensional person in Romulus.

After Jackson, though, things get a bit sparse as the rest of the cast has to play off the master actor. This is a fault of the story, not the actors, as the characters are universally overshadowed by the star. False leads and fake outs make up the bulk of the tale as Romulus must strip away the lies and misleading information to finally solve the crime. I don't want to give the story away, but too much slight of hand is used to lead the viewer down false paths in the investigation. Colm Feore does put a slick arrogance into his perf as David Leppenraub and Ann Magnuson, as David's sister and Rom's love interest, comes across as a really nice lady. Anthony Michael Hall has a bit of fun as a yuppie lawyer who, through circumstance, becomes Rom's patron. The rest are there to support Jackson.

Romulus's mental state and delusions are reminiscent of Terry Gilliam's "The Fisher King," especially his ranting against the invisible Stuyvesant. One ongoing hallucination is particularly effective as Ledbetter's ex-wife Sheila (Tamara Tunie), in her younger form, keeps appearing before him as his muse, dispensing advice and criticism as necessary. The focus upon Romulus and his mental illness affords Jackson the opportunity to delve into the character, giving us a terrific study by the actor.

Kasi Lemmons has a tough job topping her debut feature and, without the incredible talent of Samuel L. Jackson, would not have come close. With Jackson in the saddle as Romulus Ledbetter, she has the chance, at least, to successfully get past the sophomore slump.