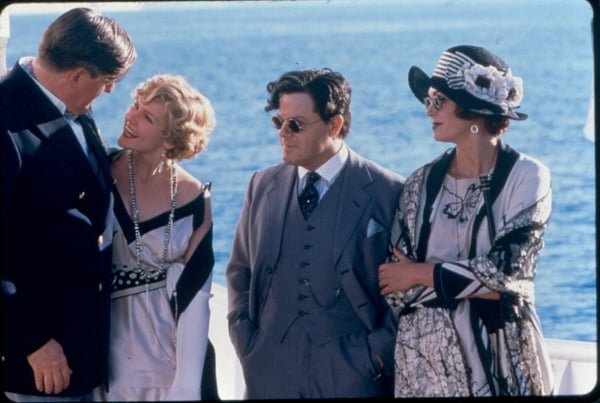 On one November weekend in 1924, 14 guests were invited to take a cruise on the luxurious yacht of pioneer media magnate William Randolph Hearst (Edward Herrman). Debauchery, illicit drug and alcohol and a love triangle are all overshadowed when one of the pampered guests is shot in a crime of passion in Peter Bogdanovich's "The Cat's Meow."

The death of pioneering Hollywood producer Thomas Ince (Cary Elwes, "Shadow of the Vampire") has become the stuff of tabloid legend with its odor of cover up and factual disconnects within a celebrity circle. Director Peter Bogdanovich ("The Last Picture Show"), who first heard the story from good friend Orson Welles as a "Citizen Kane" anecdote, gathers a glittering cast to perform Steven Peros' play adaptation, where the action occurs on the yacht of William Randolph Hearst, in "The Cat's Meow."

"The Cat's Meow" resembles "The Last of Sheila" crossed with the period of "Murder on the Orient Express." While this lively whodunit doesn't herald a major comeback for Bogdanovich, it does showcase nineteen year old Kirsten Dunst ("Spider-Man") in one of the best female performances of the year.

Ex pat English novelist Elinor Glyn (Joanna Lumley, TV's "AbFab") acts as our tour guide and witheringly witty commentator. She's the first to arrive for the weekend cruise, but advises her driver that she is not here, not wanting to be unfashionably early. She'll depart with the same declaration for very different reasons.

Starlet Marion Davies (Dunst) watches the arrivals from her lush stateroom - she's like a bird in a gilded cage. She has some intense eye contact with Charlie Chaplin (Eddie Izzard, "Shadow of the Vampire"), before telling off 'Pops' for spying on his guests, which W. R. Hearst (Edward Herrmman, "Reds") does with elaborate shipboard eavesdropping and spyhole devices. W.R. acquiesces to his mistress, graces her with a new diamond brooch, and begins to host the weekend cruise in honor of Ince's birthday.

Everyone on board has an agenda. First and foremost, Hearst is keeping an eye on Marion and Chaplin, especially after his assistant Joseph (Ronan Vibert, "Shadow of the Vampire") delivers a rival paper's gossip column which pairs the duo at a nightclub. Ince is desperate to make a filmmaking deal with Hearst as a comeback gambit and is quick to spot and use Hearst's weakness. Ince's business manager George (Victor Slezak, "Lost Souls") is acting as a beard for Ince's mistress Margaret Livingston (Claudia Harrison), an aspiring actress hoping for a career push. Louella Parsons (Jennifer Tilly, "Bullets Over Broadway"), a NY Hearst film reviewer, is looking for syndication. Chaplin wants Davies, who's fighting the temptation in favor of keeping Pops' peace. When Ince provides Hearst with a discarded love letter from Chaplin to Marion, his gesture backfires spectacularly.

Peros' script is most successful in seeding future facts known about the 1924 shipboard revelers in later years. Hearst's puritanical insistence on limiting guests to one alcoholic drink (they make up for prohibition later below decks) is sure to provoke thoughts of Davies' later alcoholism. Chaplin keeps asking if his starvation ideas are funny, until Marion acknowledges the idea of eating a boot, but only if it's boiled first. Chaplin insists that Hearst is keeping Davies down in historical dramas when her talent lies in comedy (he's proven right when Hearst bores guests with Marion's latest dailies and the audience only comes alive at her between takes tomfoolery). An underlying theme about the curse of success, exemplified by many of the characters here, is summed up by Glyn equating Hollywood with a beastly wizard.

With the exception of Dunst, the cast has been assembled from tried and true period performers, yet she outshines them all. With maturity and depth, Dunst makes us ache for the young woman who denies her own passions to stay loyal to her benefactor. She displays confidence in shepherding the activities of a boatload of luminaries while steering Hearst clear of boring business prattle and both vulnerability and strength when faced with romantic desire. Herrmman is directed too far towards the doddering fool (he wears a jester's cap while being cuckolded at a costume party) to be completely convincing as the media magnate, but surprisingly he looks just right paired with Dunst. Izzard is good as the amoral ladies' man, but paints a blurry impressionistic picture compared to the razor sharp performance Downey Jr. gave in "Chaplin." Elwes gives us a self-centered, manipulative Ince in an unsympathetic, uninvolving turn. Tilly is shrilly gauche as Louella, but shows the shark once she's dealt the trump card. Lumley is yummy tossing off caustic lines like the group's own Dorothy Parker.

Bogdanovich makes his film small, rather than grand, with close, dark interiors which feel dank, while the overall tone is too broad. The film is given a historical documentary air with black and white bookending scenes of journalistic frenzy at the celebrity funeral that segue to Chaplin gazing at the opposing points of his lovers' triangle through
portholes at film's beginning and end.

Bogdanovich's surest stroke with "The Cat's Meow" is in giving Dunst her best role yet.

While I have a problem with the plodding, by-the-numbers direction by Bogdanovich and the caricatures, rather than characters, created by the script spawned by a play, which, in turn, was adapted from the original script by Steven Peros, I have high praise for one cast member, in particular, in "The Cat's Meow." Kirsten Dunst is absolutely captivating as Hearst's loyal mistress, actress Marion Davies. The 19-year old actress is called upon to play a character nearly a decade older and she not only pulls it off, she shows an acting maturity and presence that overshadows the rest of the cast. Dunst is developing into one fine actor and is eminently likable as Davies.

The rest of the cast, led by Herrman and Cary Elwes as film pioneer Thomas Ince, all give solid, if two-dimensional, performances. Herrman is full of bluster and insecurity as mogul Hearst. He obviously adores his lover, Davies, but is in a state of turmoil over her past (and present) association with film icon Charlie Chaplin (Eddie Izzard). The veteran thespian combines self-confidence and uncertainty, along with jealousy and a violent streak, that make the character an unlikable cuss. Elwes plays Ince as an ingratiating toady who sucks up to Hearst without shame in an effort to get the mogul to back the filmmaker's movies.

Joanna Lumley, as transplanted English novelist Elinor Glyn and the film's narrator, is witty and urbane as she disdains Hollywood society while embracing it wholeheartedly. Comedian Eddie Izzard comes across well (although his character reminded me more of Orson Wells than the Little Tramp) as the womanizing Chaplin who can't keep his hands off of his host's mistress. Jennifer Tilly plays columnist Louella Parsons at the very dawn of her long career as Hollywood's number one gossip. The character comes across, initially, as a dim bulb that sucks up to her boss, Hearst, but gets to put a conniving spin on Louella's character by the film's end.

I have no squawk about the technical side of things in "The Cat's Meow." Photography, by Bruno Delbonnel ("Betty Blue"), is lush with golden tones that match the opulence of the setting - Hearst's 220-foot yacht. Production designer Jean-Vincent Puzos creates a world, almost totally aboard ship, that captures the decadent lifestyle that only money can buy. Costume designer Caroline de Vivaise must have had a ball creating the wardrobes of the rich and famous during the roaring 20's, especially with the gorgeous rags worn by Dunst.

I wouldn't call "The Cat's Meow" the comeback film for Peter Bogdanovich, but it is quality filmmaking that carves out a spin on the events that led to the death of one of Hollywood's pioneers. The real draw, though, is the performance by Dunst that is, alone, worth the price of admission