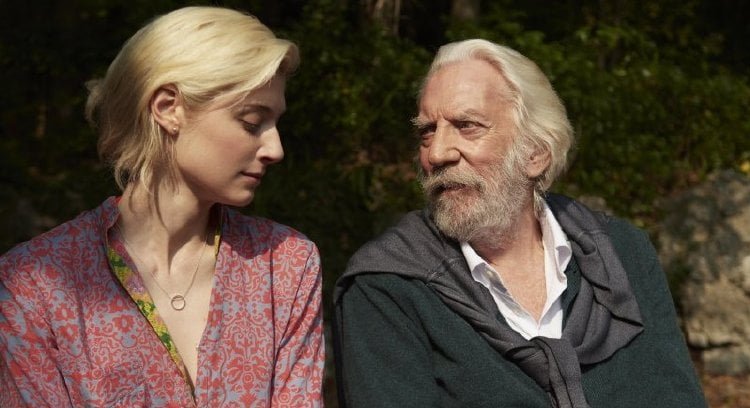 James Figuera (Claes Bang) is an art expert and critic who, because of a past scandal, struggles to get by. He is approached by a mysterious collector, Joseph Cassidy (Mick Jagger), to acquire a painting, by whatever means, from the famous but reclusive artist, Jerome Debney (Donald Sutherland) in “The Burnt Orange Heresy.”

‘The Power of the Critic’ author James Figueras ("The Square's" Claes Bang) has fallen on hard times, earning a living by giving clever bait and switch art lectures to tourists in Milan. He does intrigue an unusual audience member, though, and flirtation with the mysterious Berenice Hollis (Elizabeth Debicki) lands them in his bed. Just when their dalliance appears to have run its brief course, James invites Berenice to join him for a weekend at the Lake Como villa of art dealer Joseph Cassidy (Mick Jagger). James’s expectations of a cataloging job are upended when the Mephistophelian Cassidy asks him to steal a painting from the reclusive Jerome Debney (Donald Sutherland) and he surprises even himself in how he acquires “The Burnt Orange Heresy.”

If I hadn’t known this was adapted by "A Simple Plan's" Scott B. Smith from a 1971 Charles Willeford novel, I would have wondered if this was inspired by “The Goldfinch” with its themes of con men, forgeries, hidden artworks and the catastrophic destruction of such. Director Giuseppe Capotondi has been spending his time in television since springing to prominence with 2009’s "The Double Hour," a twisty noir, that like this one, seems split in two and fares better during its earlier goings.

Figueras sucks his audience in with an odd painting he initially describes as worthless before spinning out the artist’s tragic back story, knowledge which casts it in a new light, before doubling back and exposing his own con. This he offers as the power of the critic to influence. Berenice, who keeps her own background cast in shadow, is hooked. Then she hears about Jerome Debney, who, his life’s work destroyed in a fire, captivated the art world by hanging an empty frame. Within the understated old world luxury of Cassidy’s villa on Lake Como, the couple learns he wants nothing more than a piece of this artist’s work. What James learns in private is that Cassidy knows all about the previous con which lost the critic his respectability.

The film reaches its pinnacle as the two outsiders – Debney and Berenice – delight in each other’s company, the two enjoying the purity of spiritual connection. This will haunt the film’s second half, which, unfortunately, becomes a lot more rote, devious cons shifting into blunt crime.

Debicki and Sutherland enjoy a beautiful give and take while Jagger enjoys a sympathy for the devil, his sly knowing keeping his contractor off balance. But one begins to wonder if Bang is simply being typecast as shallow art world figures or if the actor himself is merely glib.

Giuseppe Capotondi directs the Scott B. Smith adaptation of Charles Willeford’s 1971 novel, The Burnt Orange Heresy, and the result is a story that seems a bit dated. The filmmakers move the original story from Florida to Milan, Italy and this does give the enigmatic tale a sense of the exotic.

During a lecture on art to a group of middle age ladies, a pretty young woman, Berenice (Elizabeth Debicki), sits in the back, listening attentively to James. Afterwards they chat and, soon after, end up in bed. But, instead of a one night stand, he asks her to join him on a “business” trip, where they meet Joseph. He takes James aside for a private talk and the plot is hatched to have James and Jerome get together. Why is yet to be determined.

Enter Jerome, a charming septuagenarian who is blissfully enjoying his life. He invites James and Berenice to go for a boat ride and Berenice, immediately liking the old artist, readily agrees, but James begs out. This is when the true nature of the story really begins to play out. And, I will leave it at that.

Claes Bang, who first came to my attention with the 2017 Oscar-nominated Swedish film, “The Square,” plays James with his cards held close to his chest. You know, because of his checkered past, that he is in on a con. But, that con game is laid out with care, allowing us to get to know Berenice and Jerome – two much more likable characters when compared to James.

Elizabeth Debicki, whom I noticed in the 2018 caper flick, “Widows,” is a stunning on-screen presence and the ice-blue eyed beauty has charisma to spare. Although James is the “star” of this tiny ensemble, my favorite scenes are between the young actress and Donald Sutherland. There is real chemistry in their scenes. And, Donald Sutherland, perfectly conveys the thoughts and feelings of a great artist in his waning years as he learned “to paint without paint.” Mick Jagger is adequate as the mystery man, Joseph, but lends little to the role to make it distinctive.

I like “The Burnt Orange Heresy,” but do not love it. Part of that is because the main character garners zero sympathy while others, Debicki and Sutherland, get lots, making for a big imbalance.