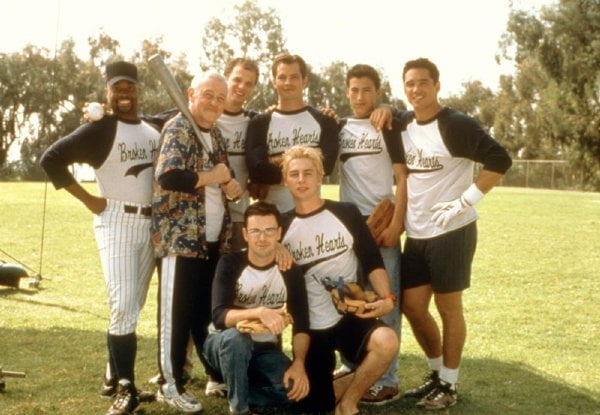 Dennis (Timothy Olyphant) is a budding photographer living in West Hollywood and is about to celebrate his 28th birthday. For him, it's a time of reflection, not on his gay lifestyle, but on his "family" - the friends that he has chosen to have around him. Cole (Dean Cain) is a hunky actor who tosses boyfriends aside like used tissue. Taylor (Billy Porter) is ditched by his live-in boyfriend with a long distance phone call from Hawaii. And Patrick (Ben Weber) constantly whines about how ugly he is. But, they are his family, and Dennis loves them all in "The Broken Hearts Club."

Writer/director Greg Berlanti brings his experience as a gay man living in West Hollywood to the screen in "The Broken Hearts Club." That club is where the ensemble cast gather to discuss their love lives or work as waiters for the owner, mother hen Jack (John Mahoney, TV's "Frasier").

The film begins with the 28th birthday party of Dennis (Timothy Olyphant, "Go"), a photographer who's trying to swear off casual sex and find a meaningful relationship. His roommate Cole (Dean Cain, TV's "Superman") is Dennis' opposite, a shallow pretty boy aspiring actor who flits from one man to the next carelessly breaking hearts. He swoops in on Kevin (Andrew Keegan, "10 Things I Hate About You"), a 'newbie' who's not yet out of the closet. This upsets Benji (Zach Braff, "Getting To Know You"), a spiky haired blond who works with Kevin and had had his eye on him.

Marshall (Justin Theroux) is getting tired of being taken for granted by Howie (Matt McGrath, "Boys Don't Cry"), who's too impressed with outward beauty ('I want to be Cole!' he proclaims). Taylor (Billy Porter), always bragging about his long term relationship, is quickly upended when he gets dumped long distance from Hawaii. Patrick (Ben Weber, resembling Tom Hanks) believes no one wants him because he's too ugly. He's also got a sister (Mary McCormack, "The Big Tease") who wants his sperm to impregnant her hostile girlfriend Leslie (Nia Long, "Boiler Room").

When they're not kibbitzing about their love lives, they're scoping out potential partners, which they alert the others to check out using the code word 'meanwhile.' They all unsuccessfully avoid playing on Jack's Broken Hearts softball team, where they're so spectacularly bad they can barely tie a seniors group. The central conflict is that of Dennis in contrast to Cole. When Cole dumps Kevin, Dennis steps in to comfort him, denying his attraction to the younger man. Cole, meanwhile, gets a shot at a Hollywood film and its long-rumorred-to-be-gay-but-married star and a proverbial dose of his own medicine.

Berlani, who both rejects (no mention of Aids) and embraces (Taylor demands Judy Garland to ease his upset) gay stereotypes has created a pleasant ensemble comedy that plays like a gay 'Friends' crossed with "Four Weddings and a Funeral." Some of his writing is clever, such as having Cole use a breakup to practice an audition script he's written on his hand or when the group compare themselves to Somalian monkeys who wait until mating season, then attack each other.

Writer/director Greg Berlanti got his start in Hollywood as co-executive producer on TV's "Dawson's Creek" and the small-screen experience shows with his feature debut. If America's TV watching society were a little more flexible in what it allows on the tube, "The Broken Hearts Club" would be ideal fare for a series. It has likable characters (mostly), a group of good-looking actors, a benign post-AIDS attitude about sex, good messages about the value of true friends and things like beauty being only skin deep, its what's inside that counts, etc., all wrapped up in an attractive package. If the content wasn't about gays, I think it would have a home on television.

For his first feature, Berlanti has created a cozy little film with pleasant performances, especially by John Mahoney, and a non-angst-ridden story about gay lifestyles. It is a social indicator of how things have changed in the new millennium when compared to the seminal 1970 gay movie, "The Boys in the Band," a film that opened America's eyes to the gay culture, something unknown to most at the time. The William Friedkin film was caustic and unblinking in its depiction of being gay in America back then. The survivalist attitude of its characters showed us that homosexuals are people, just people, with the same hopes and fears as a heterosexual. "Boys" was groundbreaking filmmaking and set such a stage so that, today, films like "The Broken Hearts Club" can attain mainstream acceptance - at the theaters, anyway.

Not that "The Broken Hearts Club" is equal to "The Boys in the Band." The older film traveled new territory, while the new flick is full of clichi. Many of the obstacles presented to gay men thirty years ago and since have disappeared and "Hearts" benefits from this. The film centers on Dennis, his friends and their search for life and love. Guiding them through their individual journeys of discovery is a kindly muse in the guise of the owner of a restaurant, The Broken Hearts Club. Jack (John Mahoney) is an old fag who has had a decades long relationship with his mate whom everyone calls the Purple Guy. Jack is also an astute and loving man who mentors his young friends, especially Dennis, on the trials and tribulations of life. Mahoney stands out as the absolute best thing in the film.

The cast, as I said, is likable, with Olyphant faring well as a good looking, nice guy who is looking for a stable, loving relationship. Dean Cain, best known as Clark Kent/Superman on TV's "Lois & Clark," gets to stretch as the narcissistic, handsome Cole. He undergoes the most significant change when he is dumped by a closeted movie star in the same way he has tossed aside innumerable lovers of his own. Andrew Keegan, as the recently outed "newbie," comes across as a good kid, one of Cole's victims, who falls for Dennis. The rest of the cast is made up with a typical variety of gay men and women trying to make it in America.

Howie (Matt McGrath) wanders from one partner to another, not realizing that his former, pot-smoking boyfriend, Marshall (Justin Theroux), is really his Mr. Right. Patrick (Weber) realizes, finally, that beauty is only skin deep. Billy Porter's Taylor is the most annoying of Dennis's friends with his constant kvetching about being jilted and his propensity to rearrange the furniture. Mary McCormack and Nia Long are amusing as the lesbian couple, Anne and Leslie, who want to have a baby and need Patrick (Anne's brother) as the sperm donor.

The script is more like a series of vignettes than a strictly linear tale, which harkens back to the TV roots of the writer. This keeps you from getting too involved with any one character, except for Jack, who, thanks to John Mahoney, is shown as a man with a great deal of heart and joie de vie. For the rest of the characters, the individual "problems" of each - narcissism; low self esteem; coming of age; broken relationships; the meaning of life; etc. - are handled in a pat fashion so each one is neatly tied up in the end. There is humor beyond the bitchiness, too, especially when Jack's beloved softball team, The Broken Hearts Club, takes to the field.