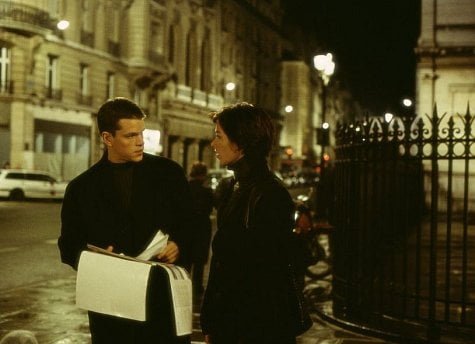 Local fishermen pull a man's bullet-riddled body out of the Mediterranean. Barely alive, the victim of the shooting has no memory of events prior to being saved. He also discovers he has a Swiss bank account number surgically implanted in his hip. But, he doesn't know who wants him dead and must use the skills and resources he didn't know he possessed to uncover why he was shot, learn whom he is and keep from getting permanently deceased in "The Bourne Identity."

In rough weather, a body is pulled from the sea by French fishermen. Amazingly the man is still alive, although two bullets are extracted from his back. A third foreign object, that looks like another bullet but projects a Swiss bank account number in infra-red, is removed from his hip. The young man, who has no memory, makes his way to that bank where he finds himself the owner of assorted passports, large sums of cash, a gun and "The Bourne Identity."

Two weeks after Ben Affleck joined an ensemble as CIA agent Jack Ryan in the Tom Clancy tale "The Sum of All Fears," his good Canterbridgian buddy Matt Damon stars front and center as Jason Bourne, a man victimized by that agency, in a Robert Ludlum adaptation. Director Doug Liman ("Swingers") proved he could follow several fast-paced threads with "Go." Here the young indie director gathers a cast of indie actors and delivers a commercial thriller that's also a dark and compelling character study.

When deposed African leader Wombosi (Adewale Akinnuoye-Agbaje, "The Mummy Returns") gives a press conference, CIA boss Ted Conklin (Chris Cooper, "October Sky") tells his staff 'Call them all in - I want Bourne in a body bag by sundown.' Conklin assures his distressed boss (Brian Cox, "L.I.E."), who reports on their Treadstone project to Congress, that they'll have the situation in hand shortly.

Bourne is spotted at the American Embassy, but escapes, using some daring wall-scaling skills. Outside, he approaches a woman who was having red tape and monetary difficulties inside, with an offer of $10,000 for a ride to Paris (the address in the Bourne passport). Marie (Franka Potente, "Run Lola Run") needs the money and Lola's on the run with a man who doesn't know who he's on the lam from.

Liman and screenwriters Tony Gilroy and W. Blake Herron balance the action with quieter moments between Jason and Marie. After escaping a relentless assassin and evading the Paris police, Marie throws her lot in with Jason. He colors and cuts her hair (stylishly, of course - all movie hack haircuts end up divine) and she tentatively invites a kiss. Damon and Potente have terrific chemistry and play this scene with just the right amount of hesitation to make the payoff steamy. After staging a wild car chase through the streets (and stairs) of Paris, Jason and Marie pull her beat up mini Cooper into a garage. Liman holds the shot of the two, sitting silently in the car, and the actors make this scene the best in the film.

Liman keeps things lively as the duo are pursued across Europe, but some questionable plot devices (a missing dog is a warning, but the dog couldn't have been a threat to a sniper a great distance from it; Gilroy's recollection of Bourne's mission is at cross purposes with Bourne's flashback to it) may nag at the attentive viewer.

Damon's fabulous as the unlikely action hero, bulked up and up to the many stunts required of him. While he's convincing killing a man with well placed jabs or eluding sniper fire running through a field, he also gets the subtle moments, such as the look of surprise that crosses his face when he finds himself replying to Zurich police in German, right. He's a man to root for, which Potente clearly does in character as Marie. Initially nervous, then terrified, Potente downshifts into admiration for, then attraction to, the dangerous stranger. She's forced to regroup once more when Bourne discovers he was an assassin himself, but Potente's up to the nimble footwork. While the supporting cast includes the likes of Cox, Cooper, Clive Owen (as another assassin) and most oddly, Julia Stiles as a field CIA operative, none of them make a strong impression - the film rightly belongs to its two stars.

Cinematographer Oliver Wood ("Face/Off") serves up a cool Euro look while composer John Powell ("I Am Sam") delivers a classy genre score. Costume designer Pierre-Yves Gayraud uses subtle touches, such as Bourne's loaned fisherman's sweater sporting holes in the back, a visual reminder of his shooting.

"The Bourne Identity" creates its own new coherence of indie arthouse and commercial thriller.

I read Robert Ludlum's action thriller novel several times in the early 80's and the story about a mysterious near-super man with amnesia stuck with me. I always appreciated the Everyman aspect of Jason Bourne even when he performed his amazing physical feats in his fight to uncover his forgotten past. The novel was a no nonsense actioner with a sympathetic lead character and a good journey of Bourne's discovery of himself. When I learned that Doug Liman ("Swingers") had signed on to direct the novel's adaptation (with the author's full cooperation. Ludlum also executive produced the film), I was curious. The guy that did a moderately successful, little indie comedy is doing a full-blown action thriller? And, Matt Damon, a name not synonymous with action heroes, is cast as just that. Good or bad, I had to see "The Bourne Identity."

While "The Bourne Identity" is not a great film, it certainly is a good action thriller that captures the essence of the Ludlum novel. Right from the opening, when an Italian fisherman spots a man's body bobbing in the sea on a stormy night, the tension begins. Nearly dead, the man is brought on board. He has two bullet holes in the back and something implanted under the skin on his hip. The skipper of the boat nurses the amnesiac back to health and sends him on his way to Zurich to claim whatever the implant, containing a Swiss bank number, will give up. The man gets to the bank and claims his prize - a safe deposit box full of money, six foreign passports, a gun and a clue to his identity - Jason Bourne.

With his booty (he leaves the gun) and new knowledge of his name, Jason heads out to find himself, but instinct tells him he is in danger. Not understanding how, he is able to easily spot his pursuers and enlists the aid, for $20000, of a young woman for a lift to Paris. Reluctantly, Marie Kreutz (Franka Potente), broke and desperate herself, takes the money and the unlikely pair begin a journey that will impact them both far beyond what they can imagine. The plot unfolds as we are brought into CIA headquarters and we see deadly serious head spook Ted Conklin (Chris Cooper) mustering his world-wide forces to find and kill Jason Bourne. The cat-and-mouse game that ensues is vintage Ludlum.

Matt Damon, as I said, is not the face that comes to mind when I thing of the term "action hero." The likable young Oscar winner is best known for his working class characters or his cameos in Kevin Smith comedies. A short while into "The Bourne Identity," Damon's character is confronted by a pair of Zurich cops. In a flash of hands and feet, Bourne disarms both men and has them on the ground. This is just the start as the action escalates and Bourne must use his hidden resources to survive. I don't know if Damon has found a new calling but he sure does a convincing job here.

Franka Potente is no slouch when it comes to throwing herself into action mode - catch her US debut in the import hit, "Run Lola Run." Marie is a good foil for Jason and adds a chaste romantic element to the otherwise on the go action. The story doesn't waste time with developing the romance and uses a kiss or embrace to suffice. Potente is likable in the role and there is nice chemistry between her and Damon.

The bad guys who are out on the hunt for Jason are rep'd by a collection of good character actors, led by the stalwart Chris Cooper. I, personally, prefer Cooper in a good guy role but his deadly earnestness as Conklin, the leader of the hunt, once again shows the actors range - even if his character is one-note. Brian Cox, as government honcho Ward Abbott, drops the don't-ask-don't-tell mode as the bureaucrat comes to realize that Conklin is a loose cannon running a black operation. Clive Owen gives a coolly clinical perf as the assassin, the Professor, sent to do in Bourne. Adewale Akinnuoye-Agbaje, as the target for international assassination attempts, is suitably blustery and demanding and is the maguffin of the film. His story comes full around in the end and is the catalyst in Jason's road to discovering his identity. Julie Stiles makes a cameo appearance as Conklin's operative in Paris, although there is no real reason for her character.

Techs are traditional, for the most part, and help to make "The Bourne Identity" feel like a spy thriller from the 60's or 70's, but with a modern look. The big car chase scene through the streets of Paris is a throwback to the likes of "Bullitt" and "The French Connection" and I say that in a very good way - you can see why the makers had to use nine identical Mini Coopers to get them through the bone-shaking pursuit. The locations traverse Europe and convey the international flair of the novel and the City of Lights, Paris, is particularly well represented. Special note needs to be made for the score by composer John Powel. The disjoint drums and jarring music perfectly convey the excitement and action of the film.

"The Bourne Identity" stands alone as an action thriller - you need not have read the novel to understand the movie. Such old-style adventure flicks are a rare occurrence in these days, what "Spidey" and "Clones" hogging the screens, but with "The Bourne Identity" we return to the more traditional action genre.