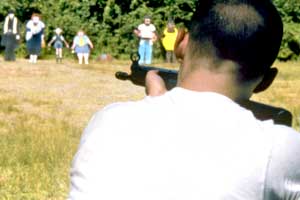 Daniel Balient (Ryan Gosling) belongs to a gang of violence seeking skinheads. He is also, unbeknownst to anyone, a Jew. These two opposing worlds collide when Danny joins a well-organized racist sect led by Lina (Theresa Russell) and Curtis (Billy Zane) who advocate the militant assimilation of the Jews into American society. Daniel, however, desires a more direct and final approach to the "problem" in "The Believer."

Danny Balient is a Swastika-wearing skinhead who gets the attention of intellectuals Curtis Zampf (Billy Zane, "Titanic") and Lina Moebius (Theresa Russell), leaders of a sophisticated NYC white supremacist group, with his revolutionary plans that begin with the murder of a prominent Jewish liberal. Invited to their upstate camp, he becomes the dominant member of the group of thugs they've enlisted, but the anti-Semitic experiences he has in that company touch off a conflict within the young man, who is himself a Jew, in writer/director Henry Bean's 2001 Sundance Film Festival winner, "The Believer."

Ryan Gosling ("Murder by Numbers"), winner of the Best Actor award at that festival, gives a searing performance as a highly intelligent young man whose early, unanswered questions make him turn from his religion and his people. Henry Bean's thoughtful screenplay provides no easy answers, but offers a compelling investigation of faith versus intellect.

An undercover New York Times reporter who witnessed Danny's speech at Zampf/Moebius home cold calls Danny at home and confronts him with his Jewishness. Danny meets him and delivers an impassioned, eloquent diatribe against the Jewish culture, whose men he proclaims female and whose legacy he notes as communism (Marx), infantile sexuality (Freud) and the atom bomb (Einstein). Bean exposes the roots of Danny's beliefs with flashbacks where Danny as a young Talmud scholar defies his teacher's explanation of the story of Abraham, with its cruel God and traumatized supplicant.

After a melee in a Jewish delicatessen, the gang is sentenced to meet with a group of elderly Holocaust survivors. One man's story about a Nazi killing his two-year old with a bayonet provokes taunts of inaction and weakness from Danny, but the story gradually merges with Danny's own memories until his own father stand in for the man and he himself is the Nazi solider, therefore killing himself. He has become the cruel God, and the conflict tears him apart. Danny's final act embodies that conflict and Bean appends a fantastical rumination of that conflict - purgatory on a never ending spiral staircase.

Because "The Believer" premiered on cabler Showtime, Ryan Gosling has been robbed of a Best Actor Oscar nomination. His performance is of that caliber, reminiscent of Ed Norton in "American History X," but blessed with stronger material.

Summer Phoenix is Lina's daughter, Carla Moebius, a mixed up kid who's sleeping with her mother's lover and gets off on violence. Her curiosity about the Jewish scrolls and artifacts Danny lovingly keeps (under the guise of knowing his enemy) guide her towards the religion and begin to soften her character.

Drake (Glenn Fitzgerald, "Forty Days and Forty Nights") is a silent sharpshooter who becomes alleged to Danny after a head-butting display of dominance. He'll become the agent of a horrified Danny's thoughts, Danny's own golem.

Zane's character is underwritten and the actor does little to flesh it out. Russell is her sexpot daughter's opposite, a buttoned up Aryan ideal who shrewdly assesses those who would forward her agenda.

Bean based his screenplay on the true story of a Jewish Klan member. He does a masterful job examining the possible roots of such a conundrum, although he's less successful defining the characters that surround his lead except as providers of Danny's opposing inclinations. Jim Denault's cinematography ("Our Song") overuses the close-up, almost predisposing the film's television premiere (of course, the subject matter was the primary hands-off factor for theatrical distributors). Original music by Joel Diamond gives the film discordant punctuation.

"The Believer" gives one faith that American independent cinema can still be provocative.

This is a powerful story by helmer Henry Bean about a young man who eschews his religious upbringing as a Jew when he questions the tenets of his faith and his rabbi cannot answer the queries. Daniel overcompensates for his change of mind and heart and goes far in the opposite direction, embracing the philosophies of Hitler and Nazism in protest of the Hebrew Faith. What follows is a character study that examines the duality of Daniel's personality and the conflict that the huge philosophical chasm creates for the very intelligent young man.

Ryan Gosling is, in a word, brilliant as the conflicted Daniel. The young actor is articulate and driven by demons as a budding neo-Nazi and commands the screen with his presence. Daniel is a repressed character who, despite his protests against the world's Jewish population (except for the Israelis whom he respects and admires), still embraces his former faith - even as he participates in destroying a local synagogue.

Those supporting the captivating Gosling - Theresa Russell, Billy Zane and Summer Phoenix - pale next to the film's star and title character. Of the three, Phoenix fares best as the knowing young woman who falls for Danny. Russell and Zane are little more than stick figures, especially next to Gosling.

"The Believer" was inspired by the true-life story of Daniel Burros, a member of the Ku Klux Klan in the 60's who committed suicide when the press revealed that he was a Jew. Helmer-scribe Bean updates the tale to present day - if you've ever read anything from Morris Dees' Southern Poverty Law Center you would find out that the skinhead/neo-Nazi problem is more rampant than ever. Making the story contemporary furthers its power and impact.

Several times, while watching "The Believer," another skinhead flick, "American History X," came to mind. The latter flick, in comparison, comes across as a wannabe. The new movie, mainly because of the fabulous acting job by Gosling, the solid, well-told story and tight direction by Henry Bean, is hands above the better film. The photography by Jim Denault is done mostly in close ups and has a claustrophobic feel, though this works well when Ryan Gosling is the camera's subject.

This is top-notch independent filmmaking and should not be missed.