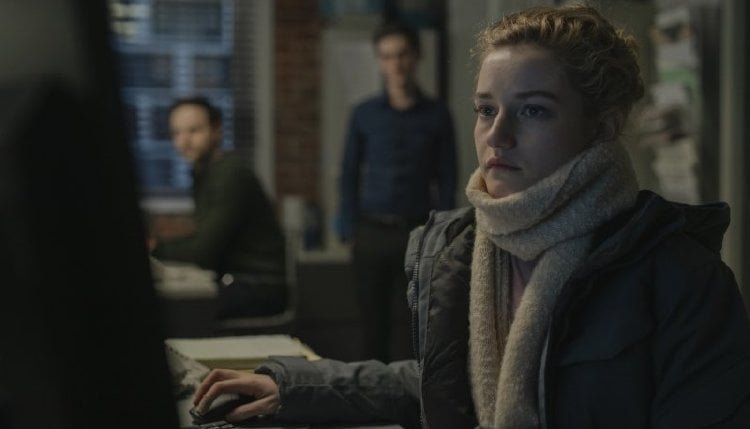 Jane (Julie Garner), a newly-hired assistant at a film production company, spends her day making coffee for others, ordering lunch and making travel arrangements and appointments – and watching a bevy of very pretty, very young women parade into the inner sanctum of her boss. Her concern brings her to the HR rep (Matthew Macfadyen), who asks Julie the question, “Do you want to keep working here?” in “The Assistant.”

Arriving early and leaving late, a recent Northwestern graduate with a 3.8 GPA has gotten her foot in the door of a high profile New York City film production company with an entry level position she hopes will lead to a producer’s gig. But as routine humiliations, her boss’s profane verbal abuse and the very disturbing circumstances surrounding the hiring of a young waitress from Sun Valley can no longer be ignored, a crisis of conscience arises for “The Assistant.”

Writer/director Kitty Green ("Casting JonBenet") was working on her next documentary on college campus sex crimes when the Harvey Weinstein headlines broke. Embracing the #MeToo movement, Green decides to instead make her feature directorial debut exposing the everyday realities of women at the bottom of the office pecking order.

It is still dark out when Jane (Julia Garner, "Grandma," Netflix's 'Ozark') is the first to arrive at the office (while the movie’s characters are given names in the press notes, we do not hear any names used within the unusually effective hushed sound design). She makes coffee and copies, all fairly routine until she enters the big boss’s office where she will scoop up a gold earring from the rug before aggressively attending to a stain on a couch.

This is the red flag, its implications immediately obvious. As the day wears on, Jane will suffer at the hands of coworkers, one of the two male assistants (Noah Robbins) in her space offering her up for such unpleasant tasks as covering for the boss when his wife calls (the first of two occasions for which she will be lambasted by the boss in a phone call we can just overhear), two women in the office kitchen blithely adding their dirty dishes to the right of the sink where Jane works while ignoring her entirely, male executives forcing her to squeeze her way by after cleaning up a conference area and thrust upon babysitting duties for a child who treats her like a servant. Her own ethics are clear, refusing to lie to the boss’s wife, questioning outgoing checks with no recipient noted.

She is surprised to receive a call from reception where a new assistant neither she nor her two male cohorts know about has reported. She begins to get uncomfortable when she is tasked with bringing the fresh-faced young girl (Kristine Froseth, Netflix's "The Apostle") to a luxury hotel. An embarrassed executive cannot save a meeting with three Japanese businessmen when the boss is nowhere to be found. His colleagues can be overheard snickering about his likely whereabouts. Jane puts on her coat and scarf and marches to the building next door where she is warmly received by an HR representative (Matthew Macfadyen, HBO's 'Succession') who then takes everything she says and throws it back as empty accusations from an ungrateful employee who can be replaced in a heartbeat.

Garner, who has little dialogue before this third act scene, doesn’t overplay the facial expressions yet her serious focus conveys a mind working overtime. While she expresses pleasure upon rare instances of praise, she is also clearly troubled by the implications of her boss’s email about face. She is always on screen and always quietly demands our attention. Macfadyen so coolly gaslights his subject, it almost works on us until he tips his hand to both audiences with his parting remark. Robbins and Jon Orsini deftly portray their coworkers as both sympathetic and untrustworthy. An uncredited Patrick Wilson appears in one scene, alone in an elevator with his assistant but intent on his phone.

One of the smart things about Green’s screenplay and direction is its quiet subtlety. There is no one big moment here, nor an outright smoking gun, instead a steady build of small injustices occasionally jolted by one of the boss’s outbursts and the casual complicity of even female executives (‘Who is she?’ Jane asks as an attractive woman (Makenzie Leigh, “Billy Lynn’s Long Halftime Walk”) enters her boss’s office to audition. ‘A waste of my time,’ answers the annoyed exec.). The hushed sound design is particularly effective, its ‘don’t wake the sleeping giant’ effect unnerving.

“The Assistant” is eerily true to life, a matter-of-fact presentation of a system that forces criminal complicity upon those who remain to try and play the game with the more powerful males who control it.

Many might take “The Assistant” on face value – it is the story of the new assistant in a film production who becomes aware of the (off-screen) abuse and unsavory behavior of her boss and tries to do something about it. Her foray into the realm of human resources ends with anything but justice for the victims. Now, color this situation and put the name of Harvey Weinstein into the equation – even vaguely – and the whole tone of the story takes on new and disturbing implication.

Julie Garner holds center stage as the hardworking assistant who is, mainly, the observer of what is really happening around her with the faceless, business-dominating white male characters who control the lives and destiny of others. She is assured that she will not be victimized and has a bright future – as long as she sees, hears and speaks no evil (about her boss). Besides, she is told, you’re not his type.

The matter-of-fact, day in the life of a studio assistant story is straightforward with just hints of what is happening behind the scenes. These hints, though, are chilling in depicting the power of rich, white men in taking what they want, when they want it. We can be thankful that the #METOO movement brings this behavior to light, but much more needs to be done to stop it completely.