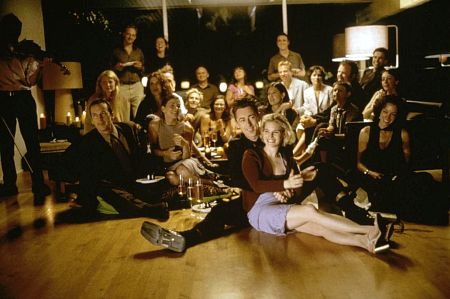 We know we're getting an 'insider' look at Hollywood Industry players as the film begins with Joe and Sally taking instruction from a personal trainer as their housekeeper and cook race around preparing for their party. They seem happy, but cracks begin to appear even before their guest begin to arrive. It seems Joe's insensitively invited stranger Skye Davidson (Gwyneth Paltrow), a twentyish superstar who will play the lead in his new movie - a role everyone knows he based on Sally.

The beginning of the film is a treat as we watch these actors stretch, creating all kinds of odd dynamics. Jane Adams throws caution to the winds as a self-absorbed new mother. 'Having a baby changes everything - you can't be the center of your own world anymore,' she observes amidst
her non-stop chatter about having to lose weight (she's stick thin), her concern over a new baby sitter (promptly forgotten) and demands for a change of clothes so as not to carry pet dander home to her allergic child (she chooses her hostess's high priced couture evening wear).

Down-to-earth mother Sophia watches all this in amazement (Cates is the only member of this gathering who seems to be normal - presumably she's simply playing herself - a retired actress married to a star. When Sophia says she's glad she got out of the business, the lines between reality and fantasy are blurred, but we're glad her old chum Leigh (they costarred in "Fast Times at Ridgemont High") got her back in front of the camera for this natural performance.)

Mina Badie is a delight as the unfamous neighbor invited to play with the Hollywood elite. She wants to fit in with a group who've all been predisposed to regard her as a joke. Denis O'Hare is a bit strident as her husband, who passes up no opportunity to harp on the barking of Joe's dog. Badie lets us in on his real problem, though - jealousy - when she cracks that all he needs is a good review (he's another writer).

Skye Davidson's arrival is comical. Presented with her golden locks gently fanning about her, Paltrow is excellent goosing her own persona. 'I think you're my first goddess' gushes Joe.

Leigh becomes warier as the evening progresses. First she must deal with the ego-blow of her friends discovering that an actress 10 years younger than she has gotten her own husband's starring role. Then she overhears Mac harshly criticizing her current performance. Joe's too comfortable with Gina, then is caught kissing the neighbor. Leigh, with her baby teeth and bruised eyes adding to her vulnerability, has simply never been better.

Veteran cinematographer John Bailey's first shot at digital video results in crisp images. The glass Neutra house in the Hollywood Hills chosen as a location is both visually interesting and gives a bit of "Rear Window" flavor to the proceedings.

"The Anniversary Party" casts its audience between the Roses, average folk peering in at the shenanigans of the rich and famous. Leigh and Cumming's actors' camp is an interesting exercise to watch, even though ultimately the performers themselves seem to have gotten the lion's share of the entertainment.