The Affair of the Necklace 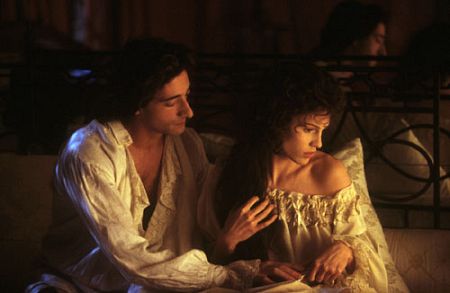 Academy Award winning best actress Hilary Swank finally steps up to the plate again, this time as a late 18th Century aristocrat who will do anything to have her birthright and her father's good name restored by King Louis XVI in helmer Charles Shyer's "The Affair of the Necklace."

Orphaned as a child when her rebellious father was murdered by the king's men, Jeanne de la Motte-Valois (Hilary Swank, "Boy's Don't Cry") grows up determined to regain her family title, estate and honor. She marries the shady Count Nicolas de la Motte (Adrien Brody, "Son of Sam"), but again finds herself alone in penurious surroundings as he chases dubious women. When h er attempt to gain the sympathies of Marie Antoinette (Joely Richardson, "101 Dalmatians") at court fails she succeeds in intriguing court gigolo Retaux de Villete (Simon Baker, "L.A. Confidential"). With his tutelage and assistance, Jeanne uses the plights of Cardinal Rohan (Jonathan Pryce, "Brazil") and the court jewelers in a conspiracy Napoleon partially credited for bringing down the monarchy in "The Affair of the Necklace."

The film begins by establishing the bliss of young Jeanne's childhood contrasted against the horror of witnessing her father's death and attending her mother's burial. The intrusive narration (by Brian Cox as Louis XVI's House Minister Baron de Breteuil) which kicks in here will repeatedly spring up to insult the audience's intelligence by stating the obvious. Additionally, the family life presented has far too modern a tone and is flashed back to ad nauseam.

While the story certainly is of interest, it is consistently undermined. Jonathan Pryce is entertaining as the debauched Cardinal whose ambitions are frustrated by Marie Antoinette's hatred. Yet the movie plays him for a buffoon with a clandestine Palace Gardens meeting with a faux Antoinette that screams subterfuge, and inept subterfuge at that. Joely Richardson makes some interesting choices as the doomed Queen, playing her as a smart woman who can't understand the populace's hatred because of the political cocoon she's kept in. She looks bad when the blocking of a scene makes her timing look inept. In a small role, Adrien Brody makes the largest impression, infusing his ignoble count with a lust for life. Christopher Walken amuses as an opportunistic mystic.

Baker is affable as Villete, but his pairing with Swank is routine. They generate more sparks manipulating Louis' court than they do as lovers. Swank tries to bring conviction to her role, but never disappears in it, coming across as a modern actress in gorgeous period costume (by Academy Award winning costume designer Milena Canonero, "Barry Lyndon").

"The Affair of the Necklace" is an intriguing piece of history, but as a film, it's a clunky affair.

As I watched "The Affair of the Necklace" I kept thinking of Stephen Frears's marvelous 1988 period piece "Dangerous Liaisons." I wished, at the time, that I were sitting in a theater watching the latter, again, as I muddled through the not-nearly-as-enthralling "Affair." Where "Dangerous Liaison" burst forth with dynamic acting, an intriguing screenplay, good attention to period details and fine directing, the new film has few of those qualities.

Hilary Swank exploded onto the movie star scene with her powerful, Oscar-winning performance in "Boys Don't Cry." She followed up with a supporting role that did not give her a chance to display her talents in "The Gift." With "The Affair of the Necklace," I expected that she would get the chance to prove herself once again. Considering the caliber of the cast around her and the opulence of the piece (though the lead disclaimer, "based on true events," should have warned me) I had hopes for some solid acting, if nothing else. The problem is, there is nothing else, including the hoped for solid acting.

At the beginning of the film, attractive Jeanne de la Motte-Valois (Swank) is alone, facing a hostile court that is deciding her fate as an aristocrat. Flash back to where a young Jeanne (Hayden Panettiere) is the beloved child of the Count and Countess Valois and the soldiers of King Louis XVI come to arrest and evict the nobles from the family estate. Her father resists the troopers and is violently murdered for his crime of opposing the king. Her pregnant mother is stricken with grief and soon dies, too. Flash forward to a grown up Jeanne vying for the attention of Queen Marie Antoinette (Joely Richardson) to petition for reinstatement of her family's aristocratic heritage. But, the queen is not sympathetic to Jeanne's cause and the noblewoman wannabe must turn to subterfuge to restore her good name.

The beautiful Jeanne attracts the eye of Retaux de Villete (Simon Baker), a clever court dandy who joins forces with her, utilizing his forgery skills to scam the powerful Cardinal de Rohan (Jonathan Pryce) into being the unwitting helper in Jeanne's plans. The Cardinal has been out of favor with the queen for years and Retaux scribes letters to the cleric, making him believe they are overtures from the Royal Highness. At the bottom of this scheme is a magnificently wrought gold and diamond necklace that Jeanne uses as the key to the return of her birthright. There are intrigues within intrigues as Jeanne utilizes any means available to achieve her desired end - including a faux Marie Antoinette used to dupe the vain, eager Cardinal.

I am, at the very least, disappointed in helmer Shyer's effort to bring this "true story" of events leading to the fall of the French monarchy to life. I was encouraged, as the credits roll over extreme close-ups of the title necklace being fashioned by Louis XVI's court jewelers. The images were crisp, nicely lighted and intriguing, but this ends once the credits finished and the real action begins. What should have been well lighted and gorgeous (to give good display to the beautifully done costumes by Milena Canonero) is mostly dark and murky. Cinematographer Ashley Rowe fails to take advantage of the opulent sets, keeping many of the scenes in shadow and indistinctly drawn.

Hilary Swank comes across less like the stalwart and ambitious character than a pretty young lady who is dressing up for the occasion. There is little inspiration in her performance and she seems overwhelmed by the production unfolding around her. The cast joining Swank is made up of seasoned vets who should provide the appropriate depth to their characters but are hamstrung by Shyer's stilted direction and the clunky script by newcomer John Sweet. Adrian Brody fares best in his small role as the ne'er-do-well philandering husband to Jeanne, Count Nicolas. He plays the hedonist convincingly. Pryce lacks the presence the ambitious Cardinal de Rohan requires, coming across as rather bumbling at times. Brian Cox goes through the motions as Jeanne's inquisitor while Joely Richardson gives a game try in breathing life into her Marie Antoinette. Poor Christopher Walken met with derisive laughter from the audiences every time he appeared on the screen as the clairvoyant Italian Count Cagliostro (with his outrageous accent).

At about the 90-minute mark, I could see where "The Affair of the Necklace" should reach its logical conclusion. Unfortunately, the film drags on for another half-hour and unnecessarily pads the finale until it seems interminable. Some judicious editing and a more experienced period director may have made a difference.