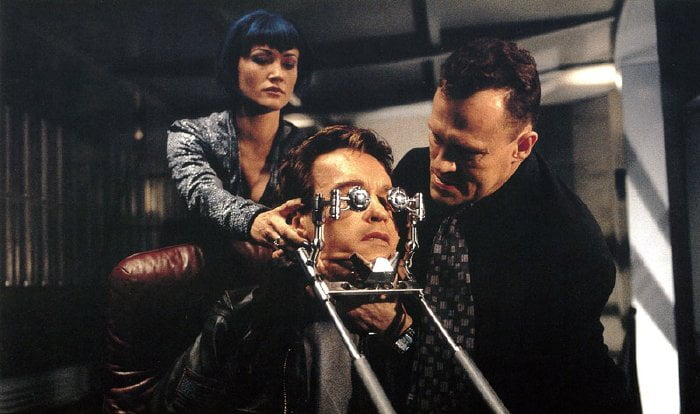 What does the future hold for us? Genetic engineering could eliminate world hunger, cure disease, and remove the threat of extinction and stock the medical labs with cloned organs for transplant. It could also open the Pandora's box of mankind's most elusive desire - immortality.

Adam Gibson (Arnold Schwarzenegger) is and old-fashioned family man with a happy and loving family. He comes home one night to find his place taken by a clone and his perfect life stolen. Adam is torn from his family and is plunged into a sinister world of murder, corruption and high tech skullduggery in "The 6th Day."

The latest Schwarzenegger sci-fi actioner is a derivative middle-of-the-road effort that's entertaining enough while you're watching it, but dissolves from the memory as you exit the theater.

Arnie is Adam Gibson (a tribute to "Neuromancer" author William Gibson?), a family guy with a sexy marriage (Wendy Crewson, "Bicentennial Man" is wife Natalie), preteen daughter and dog Oliver. He owns a helicopter charter business with his younger partner Hank (Michael Rapaport, thoroughly wasted here). After Hank poses as Adam to take the wealthy owner of Replacement Technologies (Tony Goldwyn as Drucker), Adam returns home to find a clone celebrating his birthday and two thugs (who seem right out of "The Matrix") intent on killing him.

Adam is established as an old fashioned kind of guy when he refuses to go to RePet, a pet cloning business, when Oliver dies. (He also owns a vintage Cadillac.) The script, by husband and wife team Marianne and Cormac Wibberley, explains that in this futuristic society, there are laws against cloning humans because of the complexity of the human brain (and the one known experiment which went tragically wrong). Replacement Technologies, which owns RePet, is publically in the human part replacement business, but privately of course they're cloning people, via the research of Dr. Weir (Robert Duvall), who's trying to keep his dying wife alive. The film's title refers to the Genesis passage about the creation of man. Unfortunately, the script botches its main mystery when attempting to explain why Adam Gibson was cloned.

Arnold is no great actor, but gets by here on his likeability. Goldwyn's an interesting bad guy, Australian actress Sarah Wynter ("Species 2") does a good Linda Fiorentino standin and Crewson injects some personality into the wife role. The rest of the cast, which includes Duvall, Rapaport, and Michael Rooker, is unexceptional.

Technically, the film provides a lot of razzle dazzle eye candy, like remote controlled helicopter races, dolls that simulate children and the 'blanks' waiting to be cloned. However, the film's visuals constantly remind us of other films like "Blade Runner," "Demolition Man" and Arnie's own "True Lies." The film's script even borrows the main premise of "The Sixth Sense." Director Roger Spottiswoode ("Tomorrow Never Dies") allows his film to run for an excessive 124 minutes.

"The 6th Day" may be better than Arnold's last effort ("End of Days"), but I doubt it will last many days during the crowded holiday movie season.

Deriving its title from the bible - "and God created man on the sixth day" - this latest Arnold flick utilizes a very hip and controversial subject, cloning, as its high-tech draw. And a rather cool one it is. "The 6th Day" begins with true and fictional reports of the progress of cloning from the first success, Dolly the sheep, through the disastrous attempts at human cloning and the eventual banning of the process if it involves people. This future world does accept the simpler aspects of the technology, though, with such specialized companies as RePet, Nu Salmon and Real Grain. These new companies can recreate your beloved but dead pet, or bring fresh food for your table. A lucrative industry in creating spare body parts has sprung up, too. But, because of the ban, whole body cloning is definitely a no-no.

Enter our hero, Adam Gibson. Adam is an adoring husband and father who leaves the house on his birthday not suspecting that a sinister plot is about to change his life. He and his partner, Hank (Michael Rapaport), have a lucrative helicopter business, Double X Charters, which ferries snowboarders up into the mountains to ski. Hank convinces Adam to take his special day off and the younger man takes the charter job of a wealthy genetics tycoon, Michael Drucker (Tony Goldwyn). The impact of this fateful decision is made vivid to Adam only hours later.

Arriving at home with a new life-size talking doll, SimPal Cindy, for his daughter, Adam is confronted by an unbelievable site. Hearing everyone singing "Happy Birthday," he looks in the window to see himself and his family celebrating his birthday. Two thugs arrive on the scene to take Adam away, telling him that there has been a "sixth day violation," that he was erroneously cloned and that, should his family find out, they will all be killed. Adam must face the powerful, greedy genetics honcho, Drucker, and his henchmen, who stole his life, forcing him to fight to get it back.

"The 6th Day" moves, despite the high-tech, sci-fi premise, along a well-traveled road about one innocent man pitted against a corrupt, evil system. Here, the cloning technology has advanced to the point where immortality is within the grasp of man, but society has deemed such advances as too dangerous. Arnold, as the muscular everyman Adam Gibson, is thrust into a world of duality as our hero is brought to question his own existence, his own reality, in this world. Is the Adam who is fighting so hard for his life and family truly being persecuted or is he merely a clone remembering a life not his? And, if he does remember another's life as his own, isn't it, then, truly his, too?

All of this is a really good premise for a movie and, if it weren't burdened with a former action megastar who wants to return to his former glory, there may have been a decent movie here. Instead, we see Arnold in transition. The former Mr. Universe has been through some major heart surgery and you can see that he just can't do what he used to in his films like "Predator" and the "Terminator" franchise. Now, Arnie has to do more thesping and less butt kicking and he is simply not up to the task. When he is playing the loving husband and father opposite Crewson and Reid, it made me want to cry - but, not from emotion for the scenes! With all the millions Arnold has made from his flicks over all these years, he couldn't have invested in a few acting lessons, maybe. The kinder, gentler Arnold needs a lot of work.

Given an "actor" in the lead role, I think that, with everything else associated with "The 6th Day," there could have been a good sci-fi actioner here. As it is, the supporting cast - with Tony Goldwyn as the ice cold, greedy high-tech entrepreneur; Michael Rooker as his chief henchman; and Robert Duval as the well meaning mad scientist - is left to hang in the breeze with nothing to anchor on to. The F/X showing the brain drain process that makes cloning possible reminded me of the 1980 Ken Russell film, "Altered States," and doesn't cover any new ground. For all the budget power, "The 6th Day" is a routine actioner.

At a little over two hours long I thought that "The 6th Day" could have easily lost 30 minutes and have been a better movie. Losing Arnold would have been another good move.