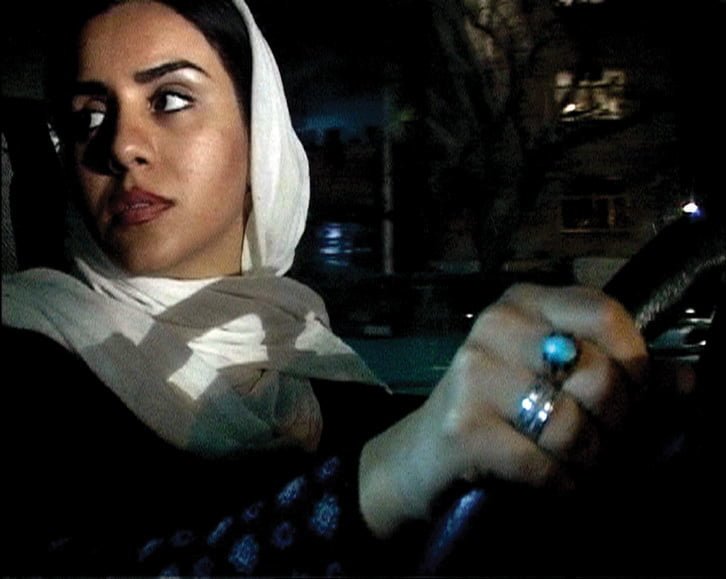 A young boy gets into his mother's car in Teheran. There is an obvious estrangement between the two and we learn that mom is recently divorced from his father, abandoning the boy to his dad. Now she wants to have her son back and he wants nothing to do with her. This is the first of 10 conversations that his mother will have over the next several days as we follow the lady behind the wheel in Iranian director Abbas Kiarostami's "Ten."

Over the course of a few days, a woman has ten conversations with her passengers, her young, combative son, her sister, a fellow mausoleum attender, a street walker and an old female beggar. Through these everyday errands, writer/cinematographer/director Abbas Kiarostami ("The Wind Will Carry Us") explores what life is like for a modern Iranian woman in "Ten."

Who would have thought a movie centered on a driver and her passengers that never leaves the car could be so compellingly watchable? "Ten" is not only a fascinating character study, but a portrait of an entire way of life.

Amin (Amin Maher) is a mini-tyrant who screams at his mother for divorcing his father, for lying, for lecturing, for not being his idea of a good wife and mother. Maher is hysterically funny to watch, but beneath the entertaining tirade is commentary on traditional Iranian male values and the extreme measures women must take to circumvent them. Kiarostami doesn't even show us his central figure until he moves to the second segment.

Amin's mother (Mania Akbari) is a beautiful, elegantly turned out woman with designer sunglasses and smart makeup who we will learn is a professional photographer. As she runs errands for her husband's birthday, she dishes with her more tradition-bound sister, who frowns upon a bakery-bought cake. Later, driving to a restaurant in the evening, the driver shows no sympathy to her sister who is sobbing over the loss of her man ('We cling to everything!' the driver admonishes), yet when her prayer friend is jilted by her fiance and reacts with thoughtful sadness, she listens and offers understanding. (She's taken up prayer visits after an amusing encounter with an old woman who verbally archives her lost belongings - 20 pillows! 8 mattresses!)

Kiarostami's 'Ten Conversations About Everything' covers the battle between the sexes, marriage, religion, global media and women in the workplace and Mania Akbari is luminous covering this vast terrain. She sparks with anger, melts with tenderness and glints with amusement. Maher shows confidence beyond his years and is vastly entertaining to watch. The actress who plays the bride-not-to-be has a stunningly cinematic face and gives a moving, melancholy performance. The film's only weak segment is the one with the hooker, which simply restates the old chestnut that marriage is just another form of sex for payment.

Kiarostami employs a digital video dash-cam to photograph his subjects, editing between driver and passenger only when they are on equal footing Tensions ease with Amin and his amused mother is cut into the scene. We never see the hooker or the street walker, except as they exit the vehicle. He chapters his scenes with a test pattern countdown punctuated with the loud 'ding' of a hotel reception desk bell. Location sound is sometimes problematic, when lowered car windows allow in too much background street noise. Howard Blake's "Walking in the Air," from the beloved animation "The Snowman," plays over the closing credits.

A simple sounding project with richly complex and rewarding results, "Ten" is a marvel.

The camera is firmly anchored to the dashboard as the lady drives, first, her son, then a succession of others: her sister, an old woman making her way to the mosque for prayer, a young woman coming from the mosque, and a streetwalker who mistakes the lady for a man. Interspersed between hauling these other folks around are the drives she has with her son as she takes him to the local pool, to his grandmother's home and to pick him up from his father.

This may sound boring but, as the ten drives occur, our image of the lady dramatically changes. At first, with her son (and the camera stays solely on the boy), she sounds like a shrew as tries to tell him why she was right to get a divorce. He feels that she abandoned him and does not want to hear any more of her complaints against his dad. But, as she greets and meets the other passengers that she ferries about Teheran, her character reveals an increasingly complex nature and we see that she was in a troubled marriage with had little choice but to seek the separation.

The simplicity of the filmmaking allows the complexity of the lady's character to come to the forefront of "Ten." Mania Akbari, the striking young woman behind the wheel, develops her character to a remarkable degree from the perceived shrew, by her son, to a kind, intelligent and compassionate person by the end of the film. Her discourse with the others brings out this intelligence and understanding as she tries to help others avoid the pitfalls she has faced in life while giving friends, family and total strangers rides to their various destinations.

Her son, Amin (Amin Maher) also develops through the film as he, initially, turns a deaf ear to his mother's explanations as to why his family fell apart. As mother/son conversations continue over several rides, he starts to come around to her humor and love. By the end he almost, but not quite, forgives her but his opinions of his mother mellow.

The various conversations between the lady and her passengers have a natural feel to them as we learn about Iranian culture, the Muslim religion and plain old human nature. Kiarostami has a fine ear for dialog and his novice actors deliver their speeches in a convincing manner. Mania Akbari, in particular, gives a sense of reality as she converses with her passengers and deals with the day-to-day traffic problems, like finding a parking space on a busy street.

Abbas Kiarostami has created, for all of its filmic simplicity - static camera, minimalist settings and obviously from the hip filmmaking (you can watch as the curious drive by the lady's car and rubberneck) - has created a nicely complex character study that I found to be very satisfying.