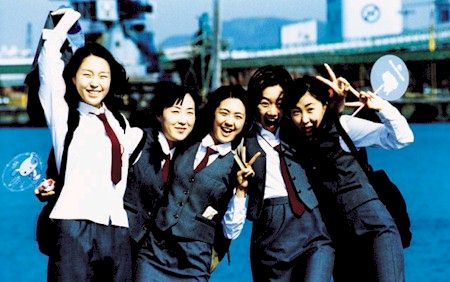 Five young schoolgirls, the best of friends, do not have a care in the world as they mug into the camera for a group photo. Move forward several years and the girls have finished school and each is trying to make a life for herself in modern day South Korea. But the days of innocence are over and they each must struggle with adulthood and try to build a future in "Take Care of My Cat."

Five girlfriends in the Korean port city of Inchon share relationships that reconfigure with time and the personal values which become better understood by when circumstantial changes make several demand, "Take Care of My Cat."

Writer/director Jae-eun Jeong showcases four distinct personalities (twins Bi-ryu and Ohn-jo (Eung-sil Lee and Eun-ju Lee) share one) among his group of girls struggling into womanhood in modern Korea. The film engages with the divergent paths taken, linked by childhood friendship and a mewling kitten, but a third act event is presented so abruptly it confuses the viewer until it rebounds somewhat with a satisfying closure.

After a flashback of the five as schoolgirls, each is presented in their post-school world. Tae-hie (Du-na Bae) is a thoughtful independent who types for a poet with cerebral palsy and works at a convenience store which fronts a crudely modern hot stone spa. Ji-young (Ji-young Ok) finds a small kitten which her grandmother informs her is supernatural. Hye-ju (Yu-won Lee) is a self-absorbed office girl. The twins are a giggly duo without much depth who mostly exist on the film's sidelines - they're introduced in an amusing scene that finds them rationalizing with their grandfather over an intercom.

The five gather at a club to celebrate Hye-ju's birthday. In the first of a running cultural gag, the friends serenade Hye-ju with a song synchronized on their cellphones. (Cellphones are a prominent and varied means of communication throughout.) Ji-young presents her with the kitten. Their occasional male buddy Chan-Yong notes that 'Men who hate cats can't meet a good woman.' The next day Hye-ju matter-of-factly returns the kitten to Ji-young, not wishing to take on the responsibility. Hye-ju borrows money from her friends without repaying it and Ji-young begins to see her friend is a user. When Ji-young is jailed because of her behavior after the loss of her home and grandparents (this makes little sense as presented), Tae-hie takes her cat in and is there to greet her on her release. Leaving the cat with the good-natured twins, Ji-young and Tae-hie set out to make a new life for themselves.

"Take Care of My Cat" is a charming look at different women defining themselves in an evolving culture. Connections to older generations are presented on the peripheral, but mostly these women stand on their own. The three main actresses create three distinctly different characters with the twins equal parts of a fourth. Harsh realities of the film's latter scenes drastically shift it's mood, which begins to sour during a trip to a mall that makes Hye-ju's selfish nature apparent.

The opening credits create an eye-catching pattern of colored cubes against the blinds of office window buildings. Jae-eun Jeong repeats the visual motif, perhaps representing positions into which the girls can slot themselves, late in the film when Ji-young takes out her frustration on a dance/music arcade game. Ji-young is also shot in arresting close-up softly lit one second and harshly the next as she rides a bus in deep thought with a new, short haircut. Although the friendship dynamic changes among the girls, only Ji-young undergoes a radical shift in her perceptions.

This is an honestly nice little film that takes us on an examination of young adult life in urban South Korea through the hearts and minds of the five principals, all young women trying to cope with their entry into adulthood. Ji-young (Ji-Young Ok) is the most troubled of the quintet. She lives with her grandparents, is unemployed and takes in a stray cat. She gives the feline to her friend Hae-ju (Yu-won Lee) as a birthday present, but the ambitious, under-educated girl is in a nowhere job, unless she wants to make the effort - which she does not - and she returns the gift within a week.

When Ji-young's home inexplicably collapses, killing her grandparents and leaving her alone, she resents the police questioning about the disaster and her refusal to answer any questions lands her as a ward of the state. Her friend Tae-hie (Du-na Bae), who transcribes the poetry and writings of a cerebral palsy patient, takes the cat into her care and works to get Ji-young sprung from her detention. After her release, the two turn their kitty cat over to the care of the twins, Bi-ryo (Eung-sil Lee) and Ohn-jo (Eung-ju Lee), as they make plans to leave Korea and seek their fortunes in Australia.

"Take Care of My Cat" is a coming of age film that shows this process in an interesting way through the eyes of the young ladies. Big-city life, with the locale of the port city of Inchon, reflects an embrace of western, particularly American, society with the high-tech dominated world a key part of the girls' lives. Particularly important to these ladies are their cell phones which they use to text message each other, program to play "Happy Birthday" and even to just call one another. It is a wonderful look into the lives of these girls in a society that is surprisingly similar to our own.

The young actresses playing Ji-young, Tae-hie and Hae-ju do a fine job in giving a unique, believable spin to each of their characters. The twins are less effective due to the two dimensional treatment their characters, Bi-ryo and Ohn -jo, get. There is not a lot going on beyond these five, but the story and the dynamics of their relationships with each other makes up for it.