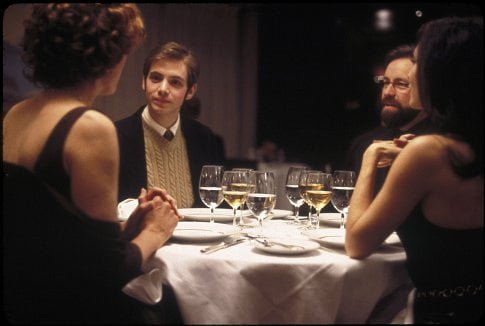 15-year old Oscar Grubman (Aaron Stanford) is mature beyond his years, at least in his own mind. He reads Voltaire, speaks French fluently, disdains the attentions of his coed peers and has a raging crush on his 40-year old stepmother, Eve (Sigourney Weaver). Home for the Thanksgiving holiday with unrequited longing in his heart, Oscar gets drunk and runs into Eve's best friend, 40-ish Diane (Bebe Neuwirth), who seduces the much younger man. Now he not only has figure out how to tell his step mom he loves her, he has to hide the seduction with Diane, too, in "Tadpole."

Oscar Grubman's (newcomer Aaron Stanford) best friend Charlie (Robert Iler, HBO's "The Sopranos") is shocked when he doesn't respond to their classmate Miranda's (Kate Mara, "Random Hearts") encouragement on the train returning them to their NYC homes for Thanksgiving weekend. 'She's totally hot for you!' declares the clearly awestruck Charlie. But 15 year old Oscar sniffs, declaring her hands childish, and hints that his heart belongs to another. Two days later Charlie will be even more dumbstruck to discover that Oscar's in love with his stepmother Eve (Sigourney Weaver) and has bedded her best friend Diane (Bebe Neuwirth) 'by accident' in "Tadpole."

Director Gary Winick's ("The Tic Code") light post-"Graduate" comedy was a huge hit at this year's Sundance, where he won the award for direction and a $5 million dollar deal from Miramax. Considering that Miramax cleaned up the digital transfer, which still looks pretty dismal, one wonders how the Utah crowd could see past the annoyingly jittery camera and ugly video look, but the upper West Side locations are represented fairly well, first time screenwriters Heather McGowan and Niels Mueller spin some inspired moments and it provides two fabulous roles for two fabulously fortyish actresses.

In an upper West Side where kids of rich parents are often out-of-control, Oscar Grubman appears to be just about perfect. Blond and blandly handsome, Oscar speaks French, the language of his birth mother, fluently, and can make an impressive argument for his assertion that Voltaire was a comedian. He believes you can tell everything about a person by their hands and no one's hands are more bewitching than Eve's.

During a Thanksgiving Day party mostly made up of academic dad Stanley's (John Ritter) Columbia colleagues, Oscar opens wine bottles, Diane flirts, and Eve is innocently charmed by her stepson's ardor. Stanley pushes a professor's 15 year old daughter, Daphne (Alicia Van Couvering), on an uninterested Oscar, who takes the first opportunity to pile her into a cab before hitting a local bar. Diane finds Oscar drunk on the street and takes him home, ostensibly to sober him up, but her chiropractic skills and the loan of Eve's scarf seduce him. The next morning, the contented cat ushers out a horrified canary right under the nose of her boyfriend Phil (Adam LeFevre, "Hearts in Atlantis").

Oscar ends up in over his head when he uses Miranda as an excuse for his overnighter with dad. Anxious to get to Eve, Oscar does everything to ditch his clueless father, but that evening will find him walking a minefield in a restaurant 'double date' with Eve, dad and Diane while Miranda occupies another table.

Stanford does an OK job as the fifteen year old sophisticate and Ritter trots out a performance of decent befuddlement we've seen before. It's the sexy older women who torment Oscar and the advisors he confides in that make "Tadpole" such frothy fun. Bebe Neuwirth is a blast as the sexually confident chiropractor who takes Oscar's non-interest in her obvious charms and turns them around, making him squirm like a bug under glass. Neuwirth draws Oscar into a cafe tea party klatch and preens with pride while her friends play with her new toy. Weaver is touching as the supportive stepmom who knows something's missing from her life but is oblivious to her stepson's all consuming crush until he lays his heart at her feet. Robert Iler gives a notable performance as the 'regular guy' friend of the rarified Oscar. His comic response to Oscar's pronouncements show a mastery of tone and timing. Also good is Peter Appel ("The Tic Code") as Jimmy, the doorman who continues to call Oscar by his childish nickname Tadpole.

While the writers resolve Oscar's emotional state a little too easily, the conflict itself is beautifully handled, especially in Weaver's able hands. And those hands (and hearts) are a persistent theme. When Eve's alone with Oscar, her hands are covered. A cardiologist, she removes surgical gloves when he visits her abandoned lab before discoursing on her subject. 'I can hold your heart in my hand' she tells him. Later, when Oscar makes his feelings clear, Eve's immediate response is to don rubber gloves and distractedly wash dishes. Only during a tennis match with him, after Oscar's affair with Diane has been uncovered, are Eve's hands bare, but she takes the opportunity to bean him with a ball, 'taking the gloves off' as it were. Oscar leaves the mature sense of feeling behind at film's end to adopt the more adolescent, male biological response to pheromes ('She smells good.')

"Tadpole" is nothing like "Rushmore," to which it is often inexplicably compared. It's more like a reversed "The Graduate" done by a less talented Wasp Woody Allen. "Tadpole's" last Voltaire quote? 'If we don't find something pleasant, at least we will find something new.' "Tadpole" doesn't offer too much that's new, but it certainly is pleasant.

This is one of the little, independent films that gets raves from the Sundance Film festival (helmer Gary Winick won the Dramatic Director Award at the 2001 fest), but when you see it you have mixed feelings. The most glaring problem with "Tadpole" is the poor quality of the technical aspects of the film. Shot on digital video, the movie often times seems like it was made using old tapes found in a box in the basement. Couple the poor quality of the video medium with shaky, annoying, hand-held camera work (by Hubert Taczanowski) and an audio track that sometimes sounded like someone was muttering in the audience, "Tadpole" can be painful to watch, which is a shame.

The tech problems (which are supposed to be much cleaner after Miramax paid about $5 million for the film, though you wouldn't guess it to watch) are tempered, somewhat, by a decent script and some good, even very good, performances. Bebe Neuwirth, as the sexy, confident and single career woman, gives a comfortable and assured performance. There is a wry wit to Diane as she declares, to Eve, that Oscar is her lover or when she hosts a tea with her other single girlfriends and gives her OK for the others to get into the boff Oscar contest.

Sigourney Weaver provides dignified elegance as Eve, a woman whose marriage may not be as it appears. She realizes a sound performance as the object of Oscar obsession, but puts an intelligent spin as she lets us know that her life is far from perfect. Aaron Stanford (the actor is reportedly 25 but looks the part of a 15-year old), as the title character, is earnest as the over-confident adolescent who thinks he knows exactly what he wants in life, but really doesn't. Stanford brings his character full circle with its bookend start and finish aboard a train. Robert Iler (the son on "The Sopranos) gives dimension to his role as Oscar's best friend Charlie, helping to flesh out the tiny cast. John Ritter, as Stanley Grubman, Eve's husband and Oscar's dad, does a fine job as the preoccupied academic whose eyes to life are eventually opened by his son.

The screenplay, by Heather McGowan and Niels Mueller, deserves more professional techs, but it is fortunate that the cast is more than up to generating the upbeat feelings that the nice coming age film should have. The story is bridged with philosophical bon mots like, "Every man is guilty for all the good he didn't do," done in white titles on a black screen and point out he humor of Oscar's very serious nature. It is not an "and they all lived happily after" story, but in the end things are very positive, upbeat and pretty normal all around. The shoddy techs hurt and will keep people away, but if you can live with the bad craft work I think you'll enjoy "Tadpole," especially the terrific perf by Neuwirth.