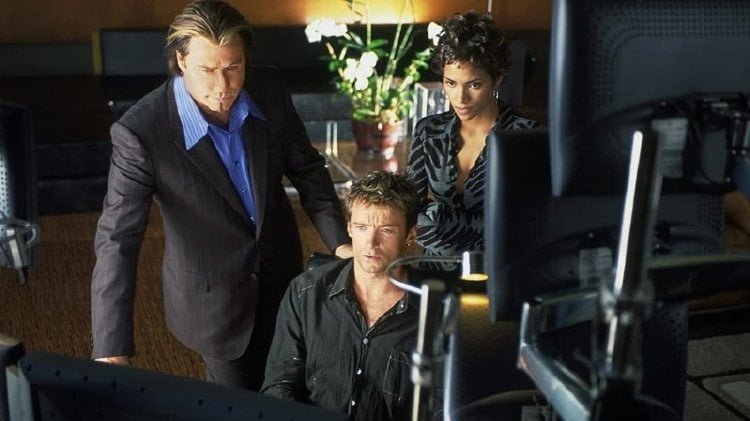 Gabriel Shear expounds on what's wrong with Hollywood - not enough realism. An admirer of "Dog Day Afternoon," he believes that Sonny should have ruthlessly blown away his hostages, gotten his bus to an awaiting plane, and walked away.  As the camera pulls back, we discover that Gabriel's in the midst of an Al Pacino moment and he's prepared to follow the agenda he just laid out in "Swordfish."

"Swordfish" opens with a bang, with the newly slimmed down Travolta sporting the most villainous hairdo since Sam Jackson's in "Unbreakable," riffing on Al Pacino like he hasn't since "Saturday Night Fever." He's got hostages rigged out with C4 and ball bearings 'like the world's biggest Claymore mines,' and when the FBI interferes, one hostage sets off a firestorm that looks like a 360 degree shot from the British nuclear holocaust film "Threads."

Now settle down for the mundane and pedestrian as the film flashes back to the preceding four days.

Skip Woods' script features high tech espionage and an attempt to keep the audience guessing via the eyes of Stanley Jobson (Hugh Jackman, "X-Men"), a hacker extraordinaire who's gone straight after a jail stint. Stanley's offered $100K by Gabriel's colleague Ginger (Halle Berry, "X-Men") to just meet with the man. Of course he can be tempted, as his beloved daughter is in the custody of his alcoholic ex-wife (Drea de Matteo of HBO's "The Sopranos"), now married to a wealthy pornographic filmmaker. He takes the $10 million assignment to create a worm that will divert a $9.5 billion DEA slush fund (code named Swordfish) to multiple accounts funding Gabriel's anti-terrorist terrorism. FBI Agent Roberts (Don Cheadle) tries to tail Stanley and a rigorous foot chase follows. A corrupt Senator (Sam Shepard) tries to have Gabriel killed and a high speed car chase scene ensues. This is pretty much all just filler to get us back to where we began.

With a tip of the hat to Pacino in "Dog Day Afternoon" again, Gabriel gets his bus, but the twist is that he has it airlifted by a Sikorski helicopter (Gabriel makes much of misdirection). While one must admire the stunt crew who really flew a bus through Los Angles skyscrapers, much of this segment seems borrowed from the likes of "True Lies."

Travolta does really good bad guy - a return to his "Face/Off" form. Young soap actress Camryn Grimes makes Stanley's daughter Holly intriguing. The rest of the cast has little to do and makes little impression.

"Swordfish" just doesn't live up to its protagonist or do justice to his mind games, but that incredibly complex opening segment and a cool, sleek Travolta almost make it worthwhile.

Gabriel Shear (John Travolta) is a renegade spy who wants to finance his own brand of patriotic anti-terrorism. Years ago, the DEA established a secret slush fund to launder money used to seize and destroy illegal drugs. Now, with interest, the fund is worth $9.5 billion and Gabriel will do anything to grab it all in "Swordfish."

Producer Joel Silver, the driving force behind "Swordfish," takes an intriguing idea of a high tech super heist, mixes the talents of Travolta, Hugh Jackman ("X-Men") and Halle Berry (also "X-Men") and comes up with a mediocre thriller that moves briskly but goes no where.

Travolta's super spy Gabriel is an enigma. We first meet him as he pontificates over the plusses and minuses of the movie "Dog Day Afternoon." As he drinks his coffee, he tells his colleagues that Al Pacino's character didn't go far enough. If he started popping hostages, Gabriel explains, he could have gotten away Scott free - and get his boyfriend that sex change operation. We leave the confines of the coffee klatch and, in a whirlwind of activity, we find ourselves amidst an even grander hostage situation. The action goes, literally, ballistic as the police screw up the situation and force Gabriel and his crew to explode a bomb-laden hostage, to devastating effect.

This slickly explosive beginning turns to flashback as we go back to four days before. The vivacious Ginger (Halle Berry) pays a visit to down-on-his-luck Stanley (Hugh Jackman), a former computer hacker whose life was ruined when he was caught wreaking havoc on a secret FBI cyberspace surveillance operation. Ginger, as Gabriel's intermediary, offers Stanley $100,000 - and the hope of getting his daughter, Holly (Carmyn Grimes), back - just to talk to the man.

Stanley eventually agrees to take the job, for $10 million and his daughter, and begins to design the complicated worm program that will burrow into the banking system and disperse the billions to Gabriel's own secret accounts. Gabriel has a separate agenda, though, and isn't content with a covert break-in. The action comes back around to the opening hostage situation and Stanley faces death, destruction and the permanent loss of Holly.

"Swordfish" - I can only believe that the filmmakers selected the title from the old Marx brothers' speakeasy skit, as in "Whatsa da passaword?" - covers some new ground with it's high-tech heist, but mainly borrows from other actioners for its substance. "Die Hard" came to mind often, especially as the villain, Gabriel, declares his plan to get what he wants, then escape using a Houdini-like misdirection. It's another slick Joel Silver production that will make money, but keeps the viewer at arm's length.

A leaner looking John Travolta leads the cast of "Swordfish" and adds nothing special here. (At least, he avoids a repeat of his perf in "Battlefield Earth," thankfully.) Hugh Jackman, too, does not put much of a personality spin on his Stanley Jobson persona. Both actors are so closely tied to the various subplots they are never able to rise above the shallow surface of the story. Halle Berry looks pretty and sexy as Ginger, but has little to do but look good. (when she flashes the camera, topless, one of the members of the screening audience yelled out, "Thank you!") Most wasted is Vinnie Jones ("Snatch," "Lock, Stock and Two Smoking Barrels") as Gabriel's chief henchman, Marco. The soccer star-turned-actor has a great presence and, with his working-class English accent, can chew dialogue with the best. He is almost mute in "Swordfish," but for a brief moment toward the end which gave me unfounded hope. Don Cheadle is fine as the avenging FBI agent Roberts. Carmyn Grimes is notable as Stanley's daughter, Holly, while Sam Shepard does nothing as a corrupt, powerful senator.

The screenplay, by newcomer Skip Wood, has an incomplete feel to it. There is sparseness to the story that makes it seem bloated in trying to fill 90+ minutes of screen time. Of course, this could also be a product of slash and burn editing that left a good deal of the film on the cutting room floor. It's hard to tell, but the results are the same.