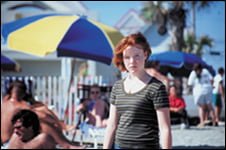 As Neil and his wife Marianne (Sharon Scruggs, "The Last Days of Disco") raise a family, Frankie does the singles thing with brash buddy Nicola, who runs a piercing business next door to the Wheeler's hamburger joint. Frankie's easy acceptance of the incompetent looker Josse gets under Nicola's skin and she watches like a hawk as both Frankie and her married brother appears to be attracted to the young woman. Josse is a lousy waitress, but Frankie just takes up the slack, delighted to be noticed and encouraged, as she is when Josse notes that a customer, Heath (Jamie Harrold, "Erin Brokovich"), is attracted to her. When Josse leaves Brad and moves in with Frankie, Nicola really goes of the deep end, getting involved with a crazy Marine, Kalani (Anthony Ruivivar, "High Art"), and increasingly heavy drinking.

Siegel and his cowriters Lisa Bazadona and Grace Woodard have fashioned an honest coming-of-age tale where the heroine views the people around her through a prism which constantly reflects different aspects of their character. The contrast of a migratory population and the townies of an old beach resort is beautifully realized both in the writing and the images captured by cinematographer John Leuba ("Autumn Heart"). 'One more day and there will be people on this beach,' observes Nicola, bracing for the onslaught at film's beginning.

Star Ambrose is a wide-eyed observer, who in trying to establish independence, allows outside influence to cloud her judgement before regaining her footing. Ambrose makes us care about Frankie because of the way quiet Frankie cares about everyone else. Still Ambrose is upstaged a bit by Dundas, who has the flashier role of Nicola, the hard-bodied, dark rooted blonde with a penchant for shocking her friends and making bad choices. Joelle Carter gives the subtlest performance as the hard-to-read, manipulative Josse. Carter disappears into the girl others want to see, gliding through life on the entitlement of her looks. Also chameleon like is Jamie Harrold as the drifter who courts Frankie, alternately sexy, nerdy, kind or clueless depending on Frankie's current perception.

"Swimming" may not make any waves, but its humanity runs deep. It's a small film polished to the perfection of beach glass.

Frankie Wheeler (Lauren Ambrose) is not a typical teenager. She grew up in a resort town in Myrtle Beach, South Carolina, and, when her parents decided to retire to Arizona, she and her brother Neil (Josh Pais) are left as owners of a diner and bar. When a new waitress, Josee (Joelle Carter), shows up things are about to change all around for Frankie in "Swimming."

Director Robert J. Siegel, working from his script with Lisa Bazadona and Grace Woodard, tells a warm, intelligent coming of age story that deals with real life issues such as sexual identity, growing up, peer pressure, sexual pressure, business pressure and the absolute necessity of having a really nice car. Frankie may be different from most kids her age, but she faces the same life-altering decisions.

There is a triangle of sorts when Josee arrives on the scene. Suddenly, Nicola (Jennifer Dundas Lowe), Frankie's best friend "forever" who runs a piercing shop next to the diner, finds herself playing third fiddle when the three girls have a night on the town. Nicola doesn't handle Josee's attentions to Frankie too well as she strike out, in anger, at her friend. Instead of making things better, Nicola makes them worse by alienating Frankie and her family. Then, a stranger rolls into town, a young man named Heath (Jamie Harrold) and his dogs, and things get really interesting in Frankie Wheeler's life.

"Swimming" is a heartfelt tale of becoming an adult in the new millennium, about understanding new ideas and having an open mind. Frankie is an observer of the life around her at Myrtle Beach. Surrounded by beautiful people in scanty clothes, she wears T-shirts and overalls and disdains worrying about her looks. Josee sees the underlying woman and is attracted to Frankie even as she carries on a perfunctory sexual relationship with a local stud, Brad (James Villemaire).

Oftentimes, teen coming-of-age movies rely on sex, nudity, drugs and foul language to entertain (not necessarily educate) their target audience. "Swimming," fortunately is different in its intelligent approach to the subject. Sure, there is sex, drugs (a little pot smoking) and alcohol in the film but all within the realm of context. There is not prurient titillation, but there is sharp dialog and smart pacing that follows Frankie through her formative days. Josee openly shows her affection for Frankie and revels in the aggravation she is causing Nicola. And, while we're not talking Oscar-winning acting, the young caste is likable and attractive.

Techs couldn't be better for a little film with a largely unknown cast. John Leuba's crisp and clear lensing helps move things along without resorting to the annoying, "realistic" hand held camera with all its jerky movement. Costuming, by Laura Sewrey, nicely handles the look of a warm weather resort beach town with all its trendy denizens and the contrast between butch-dressing Frankie, ultra feminine and sexy Josee and slutty looking Nicola. It's not a perfect film - at one point, Frankie greets her sister-in-law and her kids coming in from the beach - in the middle of the night, but you can forgive it its minor flaws.

"Swimming" is geared to a youthful fem audience that I would recommend for mature adolescents and older. The solid filmmaking and convincing characters makes this a high water mark for this genre.