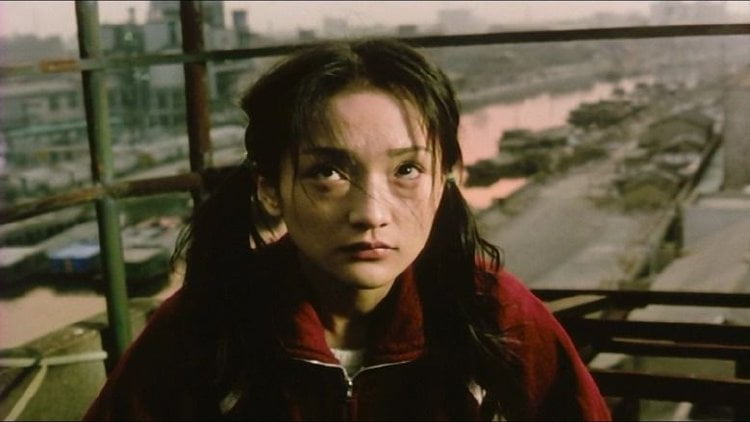 Lao B. (Zhongkai Hua) is a videographer who falls in love with the somewhat elusive Meimei (Xun Zhou, "The Emperor and the Assassin"). 'If I disappeared, would you search for me like Mardar did?' she asks and Lao B. recounts for us this second tale of love which also takes place along "Suzhou River."

Writer/director Ye Lou's film of intertwining tales of love has been described as a Chinese "Vertigo." It also recalls David Lynch's "Lost Highway" with its prominent use of a videocamera and videocamera point of view ('Don't complain if you don't like what you see - cameras don't lie.').

Lao B. gives us a tour of the Suzhou River area with his videocamera as our eyes (in a rather cool shot, he plays a hand slapping game with Meimei and we see four flashing hands in the forefront with her laughing face in the background). We never really see Lao B. He meets Meimei when her boss, the owner of a shady tavern, asks him to tape his mermaid show to use as promotion. Meimei is the mermaid.

The bulk of the film, however, tells the tale of Mardar (Hongshen Jia) and Moudan (Xun Zhou again, looking more childlike with her hair in pigtails). Mardar is a good looking motorcycle courier who's paid by Moudan's father to take her to her aunt's when he entertains his mistress. (Moudan's father runs an illegal vodka factory.) Moudan, who carries a blond mermaid doll, becomes attached to Mardar and a chaste romance develops between the two. But wait, interrupts Lao B., before throwing some what-ifs at us which change Mardar's backstory. Suddenly Mardar is tasked with holding Moudan in a kidnap plot. She tells him she'll find him again as a mermaid before plunging off a bridge into the Suzhou. After a prison sentence, Mardar returns to find Meimei, the mermaid who looks exactly like Moudan.

Ye's video film envelops us in a dream state as we witness two men obsess over the same(?) woman before all three/four cross paths. Meimei/Moudan appears to be identical (same face, same dress, same press-on tattoo), although one is an worldly adult and the other an innocent.

"Suzhou River" questions identity and reality within the confines of a harsh environment. It's tough, edgy, jaded and romantic. Lou Ye's accomplished a lot with very little.